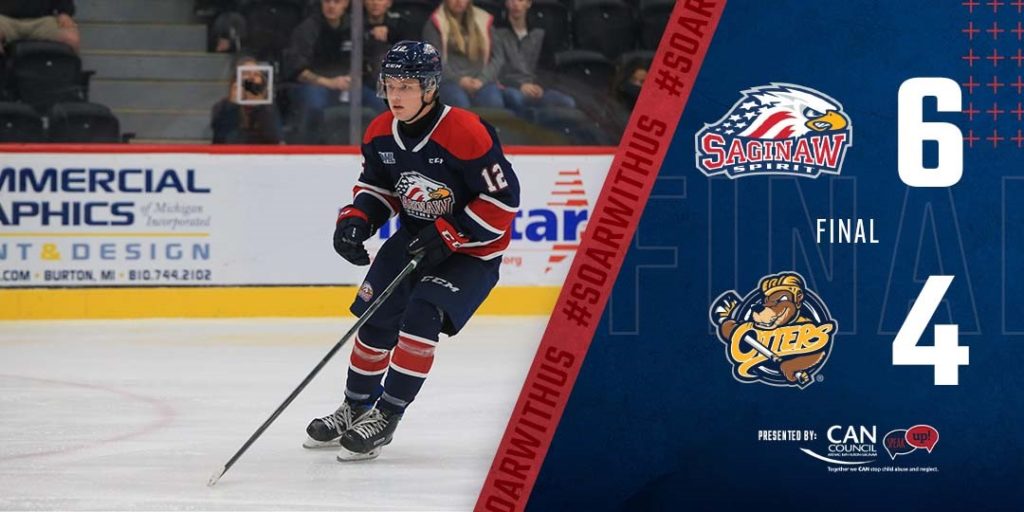 Erie, PA – The Saginaw Spirit finished their three-game road trip Sunday afternoon with a 6-4 victory over the Erie Otters. Calumet, MI native Dean Loukus scored his first, second, and third career OHL goals to lead the Spirit. Andrew Oke picked up his first career win in net, coming in to the game in relief of Tristan Lennox in the first period and making 15 saves.

Erie opened the scoring at 6:55 of the first period as a puck lie loose in the Spirit defensive zone. Lennox charged out after it, but Noah Sedore got to it first and slid it in to the open net. Erie maintained the lead until the final minutes of the period when Dean Loukus scored his first OHL goal on the powerplay. The late goal tied the game at intermission, with Saginaw in full control of the shot clock, 12-3.

The second period was much of the same for the Spirit, they continued to pour the shots on and were finally rewarded at 8:06 on Dean Loukus’ second goal of the night. Just 2:06 later, Cam Baber fed T-Bone Codd for his first of two goals in the game at 10:12. The Spirit led 3-1 going into the third period.

Erie perked up in the final frame, scoring at 1:28 of the period to make it 3-2 Saginaw. Dean Loukus would answer again with his third goal of the game to put Saginaw back up 4-2. 2021 first round pick of the Otters Carey Terrance brought the Spirit lead back to one goal at 7:50. AT 9:03, Nick Wong scored his second goal of the season for Saginaw to make it 5-3. Brett Bressette scored again to make it 5-4 with 2:00 to go. With the Otter net empty, T-Bone Codd scored his second goal of the game to give Saginaw a 6-4 advantage.

The Spirit took five of a possible six points on the road trip and will head home to face the Flint Firebirds on Wednesday at 7:05 p.m.