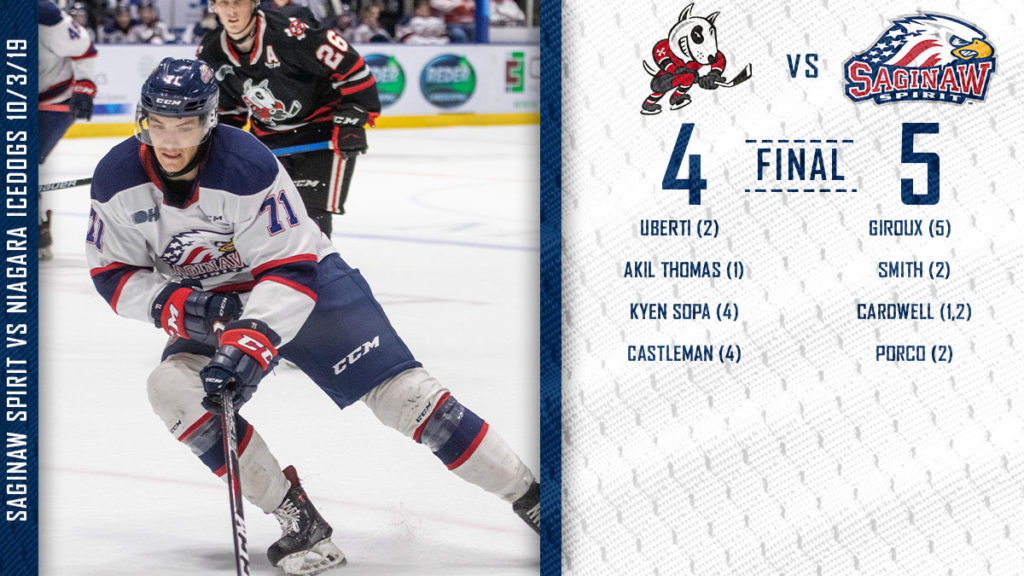 St. Catharines, ON. – The Saginaw Spirit earned their second straight victory Thursday evening against the Niagara IceDogs by hanging on to a 5-4 victory in front of 4,212 at the Meridian Centre in St. Catharines, ON. Captain Damien Giroux and Ethan Cardwell led the way for Saginaw with three points each.

Only 3:23 into the first period, IceDogs Jake Uberti picked up the puck in his own zone and skated down the right side of the ice. He beat Spirit goaltender Marshall Frappier short side to get the first goal of the game for the IceDogs on a two-on-one break. The IceDogs finally broke Frappier’s shutout streak at 63:23 of scoreless hockey.

IceDogs Jackson Doherty took a penalty for tripping, resulting in a Spirit power play. The Spirit won the ensuing draw and cycled the puck until first-round import draft pick Ilya Solovyov took a shot on net from the point and then Minnesota Wild draft pick and captain Damien Giroux buried the rebound to tie the game. Giroux’s goal was his fifth of the season. All five of his goals this season have come on the man advantage.

Giroux carried the puck deep into the IceDogs zone and found Saginaw native and rookie Mitchell Smith at the top of the left circle. Smith ripped a wrist shot past IceDogs goalie Tucker Tynan to break the tie, ending the first period with the Spirit up 2-1.

The IceDogs broke in 3-on-2 and Jonah De Simone hit Los Angeles Kings draft pick Akil Thomas with a cross-crease pass to tie the game back up only 1:39 into the second period.

Around halfway through the second, the Icedogs pressured the Spirit with a heavy forecheck. They regained control of the puck and cycled the puck around the offensive zone until Nashville Predators draft pick Philip Tomasino found Kyen Sopa from behind the net for a one-timer to break the tie.

After turning the puck over again, the puck found its way back to the point where DJ Busdeker took a low, hard shot. Dallas Stars draft pick Nicholas Porco got the rebound and put the puck into the open net only 23 seconds after Cardwell’s goal, breaking the tie and closing out the second period with the Spirit on top 4-3.

With Saginaw looking to hang on to a one-goal lead, IceDog veteran Elijah Roberts turned the puck over to Damien Giroux. Giroux made a slick pass to Ethan Cardwell, who snapped a shot in off the crossbar for his second goal of the game.

Just over half-way through the third period, the IceDogs tried to mount a comeback as Oliver Castleman put in a rebound to bring the score to 5-4. The Spirit were able to hold off the IceDogs to get their second win in a row and improve to 3-2-1-0.

The Saginaw Spirit will face-off against the Erie Otters Friday night at the Erie Insurance Arena. Puck drop will be at 7:00 p.m.

Fans can catch all the action on the flagship WSGW Newsradio 100.5 FM and www.wsgw.com with the voice of Saginaw Spirit hockey Joey Battaino on the call.  “Countdown to Faceoff” begins 15 minutes prior to puck drop.

Saginaw returns home Wednesday, October 9 to take on the Peterborough Petes for the first of two meetings this season.  Puck drop is at 7:05 p.m. from the Wendler Arena inside The Dow Event Center.