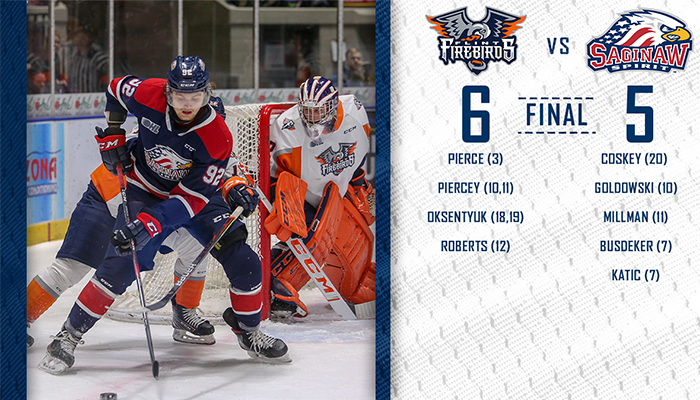 Saginaw, MI. – The Saginaw Spirit dropped a 6-5 decision to in-state rival Flint Firebirds in the fifth installment of this season’s Coors Light I-75 Divide rivalry in front of 3,211 fans Wednesday evening at The Dow Event Center in Saginaw, Michigan. The Spirit hold a 3-2-0-0 series advantage over the Firebirds this season.

Four minutes into play in the first period the Flint Firebirds took an early 1-0 lead on Emmet Pierce’s third goal of the season.  With a Saginaw defenseman caught in the Flint end, the Firebirds entered the Spirit zone on a three-on-two rush.  Peirce drifted down to the top of the right circle and fired a wrist shot over Spirit goaltender Marshall Frappier’s blocker for the 1-0 lead.

New York Islanders prospect Cole Coskey brought the Spirit back even with his 20th goal of the season 6:32 into the first period.  ‘A’ rated 2020 NHL Draft prospect Cole Perfetti kept the puck in the Flint zone and dumped the puck to Coskey at the left halfwall.  The Spirit right-winger cut towards center ice and stick handled through a couple Firebirds defenders.  Coskey released a wrist shot from the slot top corner past Flint netminder Anthony Popovich to tie the game 1-1.

Newly acquired Flint Firebirds forward Riley Piercey put Flint back up a goal just past the midway point of the first period on a two-on-one rush.  With only rookie defenseman Connor Punnett back Jack Wismer feathered a pass over for Piercey to one-time from the left circle by Frappier to give the Firebirds a 2-1 lead.

Again, the Spirit responded quickly and tied the game 11:27 into the first frame on Jake Goldowski’s 10th goal of the season.  Overage defenseman D.J. Busdeker sped into the Flint end and snapped a shot from the right-wing wall that rebounded into the slot.  Goldowski was in the right place and took a snapshot that beat Popovich over the goaltender’s right-shoulder to tie the game, 2-2.

Saginaw had a 19-11 shot advantage in the first period, but the teams went into the intermission tied, 2-2.

The Firebirds regained the lead on Flint leading scorer Evgeniy Oksentyuk’s 18th goal of the season 6:59 into the second frame.  Florida Panthers prospect Vladislav Kolyachonok’s shot from the point was knocked to the right of the crease by 2019 Flint Firebirds second overall pick Brennon Othmann.  The Belarusian forward Oksentyuk fired the puck into the open right-side of the net to give the Firebirds a 3-2 lead.  Oksentyuk extended his point streak to 14 games with the goal, which tied Flint Firebirds alum Kole Sherwood for the team-record.

Just 40 seconds later, Philadelphia Flyers prospect Mason Millman responded with his 11th goal of the season to tie the game, 3-3.  Forward Danny Katic tipped the puck past a Firebirds defender to Millman at the Flint left point.  The Spirit defenseman fired a wrist shot through a screen in front of the Flint goaltender Popovich top shelf to make it a 3-3 game.

Flint pulled ahead with 6:49 left in the second period with Riley Piercey’s second goal of the game for a 4-3 Firebirds lead.  The former Barrie Colts draft pick’s shot from the top of the left face-off circle ricocheted off of Millman’s stick past Frappier for Piercey’s 11th goal of the season

Saginaw tied the game with just 1:07 left in the second period on Dexter, Michigan native D.J. Busdeker’s seventh goal of the season.  The Saginaw defenseman gained control of the puck in the Saginaw zone and flew up ice.  Busdeker deked around a Firebirds defender at the Flint blueline and sniped a wrist shot from the right face-off dot into the top right-corner of the Flint goal.

The second period ended in a 4-4 tie, but the Spirit led 34-31 through 40 minutes of play in the shot department.

After Mason Millman was called for a boarding minor, the Firebirds gained a 5-4 with a power play tally for Oksentyuk’s second goal of the game.  Kolyachonok feathered a pass to Oksentyuk in the right face-off circle, the Flint forward ripped a shot from the face-off dot to give Flint a 5-4 lead with 12:40 left in regulation.

With 7:26 remaining in the third period, Flint took the game’s first two-goal lead on Connor Roberts 12th goal of the season.  Overager Jake Durham centered a pass from the right corner for Roberts to one-time into the Saginaw net from the slot to put the Firebirds ahead, 6-4.

After a cross-checking penalty called to Vancouver Canucks draft pick Ethan Keppen, Danny Katic brought the Spirit back to within a goal with his seventh of the season.  Millman’s point shot was knocked down in the Flint slot and Katic pounced on the loose puck.  The Saginaw forward looked to pass, but then fired a turnaround backhand shot that beat Popovich stick side with 4:16 left in regulation.

With the Saginaw goaltender Frappier pulled late, Perfetti and Busdeker each hit the post, but the Spirit were unable to collect the game tying tally.

The Saginaw Spirit hit the road Friday, January 10 to finish up the home-and-home matchup against the in-state rival Firebirds from The Dort Federal Event Center in Flint, Michigan.  Puck drop for the sixth matchup in this season’s Coors Light I-75 Divide Rivalry begins at 7:00 p.m.

Saginaw returns home Saturday, January 11 to host the London Knights for Love Shouldn’t Hurt Night presented by Bay Area Women’s Center and Underground Railroad in hopes to gain awareness for domestic violence victims in the Great Lakes Bay region.  Saginaw and London have split the first two meetings of the season with both teams victorious on home ice.  Puck drop from Wendler Arena inside The Dow Event Center starts at 7:05 p.m.