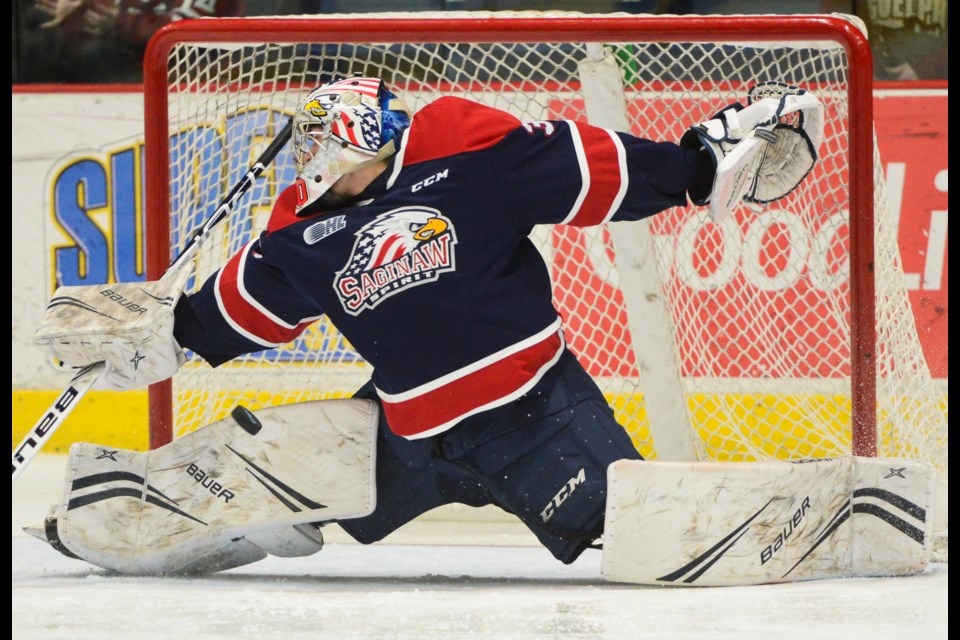 Guelph, ON. – The Saginaw Spirit fell to the Guelph Storm, 6-2 on Friday, November 29 at the Sleeman Centre for the second game of the three-game road trip.

The Saginaw Spirit tested the Guelph Storm goaltender Nico Daws early in the first period with the first six shots of the game coming from the Spirit.

At 12:07 of the first period, the Storm found the back of the net first. Cam Hillis passed the puck to Pavel Gogolev at the left-wing circle. The wrist shot went past Spirit goaltender Tristian Lennox.

The Spirit answered with a goal a little over a minute later. Spirit newcomer Danil Antropov passed the puck to 2020 top NHL prospect Cole Perfetti from the right-wing circle. Peretti received the puck out front of the net where he took a wrist shot that Storm goaltender Nico Daws was unable to block to tie the game.

The Spirit dominated the puck during the first period, outshooting the Storm, 13-6.

Less than a minute into the second period, the Storm broke the tie. Josh Wainman shot the puck from the point. The puck bounced off of Cooper Walker, which allowed Jacob Roach to find the puck and tip it in to break the tie.

The Storm added to their lead at 3:55 of the period. Eric Uba skated up to the net and shot the puck which rebounded off of Lennox’s pads. Clark Hiebert collected the rebound and shot the puck again. Another rebound off of the pads was grabbed by Danny Zhikin who then shot the puck top-shelf past Lennox.

At the Guelph blue line, Camaryn Baber passed the puck to Ethan Cardwell who skated to the left-wing circle. Cardwell, buried the puck deep behind the Storm’s goaltender with a wrist shot, closing the gap to 3-2. Cardwell now has goals in back-to-back games. Baber has two goals and four assists in his last seven outings.

At the bottom of the right-wing circle Jacob Roach gained control of the puck and passed it to Matthew Papais who was out front of the net. Papais got the puck around Lennox’s pads to add to the Storm’s lead.

The Spirit went into the second intermission trailing the Storm, 4-2.

Lennox was tested early in the third period. Eric Uba brought the puck into Saginaw’s zone. Skating around a Spirit player, Uba tried to tip the puck in, but Lennox blocked the shot.

As a holding penalty called on Dalton Duhart was about to expire, the Storm found the back of the net once again. Michael Bianconi passed the puck to Jacob Roach from the slot. At the top of the left-wing circle, Roach took a slap shot that made its way to the back of the net.

Mason Millman was sent to the box for hooking making it another Storm power play. Still on the power play, Cam Hillis received the puck from Daniil Chayka at the point. Hillis shot the puck toward the net, but the puck was deflected. Andrei Bakanov picked up the loose puck and shot it past Lennox to extend the Storm’s lead to 6-2.

The Saginaw Spirit continue the three-game road swing Saturday, November 30 when they travel to take on the Owen Sound Attack. Puck drop is at 7:30 p.m. from the Harry Lumley Bayshore Community Centre.

The Spirit return home Wednesday, December 4 when they matchup against the Guelph Storm in a make up contest for the postponed game due to poor ice conditions back on November 2.  Puck drop from The Dow Event Center in Saginaw, Michigan begins at 7:05 p.m.