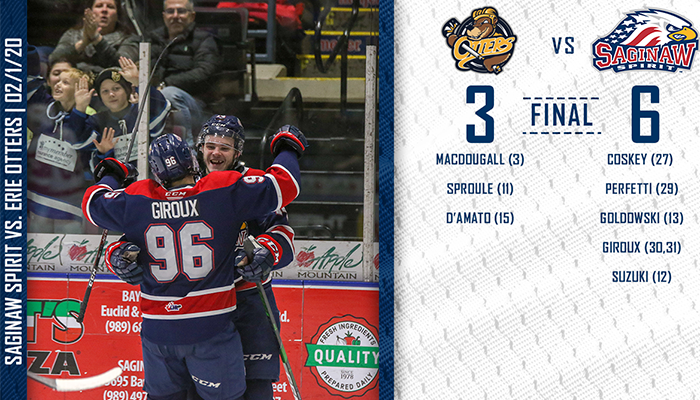 Saginaw, MI. – The Saginaw Spirit extended their lead in the West Division to five points after a 6-3 victory over the Midwest Division’s Erie Otters in front of 5,270 fans on the 13th annual Shocks and Saves Night at The Dow Event Center in Saginaw, Michigan.

Center Austen Swankler was charged for a cross checking penalty just seven seconds into the opening period to give the Spirit an early man-power advantage.  Saginaw had scoring opportunities but was unable to convert on the power play.

After overage defenseman Riley Webb was called for a hooking minor, New York Islanders prospect Cole Coskey tallied a shorthanded goal to give the Spirit a 1-0 lead 3:52 into the first period.  The Saginaw Spirit all-time games leader Coskey began the rush in his own zone and went wide left around an Erie defender.  At the Erie blueline, Coskey toe dragged around another Otters defender and cut towards center.  The right-winger sniped a wrist shot over Erie netminder Aidan Campbell’s right shoulder for his 27th goal of the season and 99th career OHL goal.

The Spirit notched another shorthanded goal after New York Islanders draft pick Blade Jenkins was charged with a boarding penalty on Spirit leading scorer Cole Perfetti’s 29th goal of the season.  Coskey received a pass from D.J. King upon entry of the Erie zone and saucered a pass over to Perfetti, who cut towards the goal.  The North American fourth ranked 2020 NHL Draft prospect Perfetti came down on Campbell on a mini breakaway.  Perfetti faked a shot, faked a deke to the forehand and lifted a backhand over Campbell’s outstretched pad for the 2-0 Saginaw lead.

The Saginaw Spirit extended the lead to 3-0 with 4:48 left in the first period on Thornhurst, Pennsylvania native Jake Goldowski’s 13th goal of the season.  2019 Philadelphia Flyers fourth round draft choice Mason Millman passed the puck back to Goldowski, who was covering the point as a forward.  Goldowski sent a wrist shot from center point through a heavy screen and in between Campbell’s five-hole for the three-goal Spirit advantage.

Saginaw outshot Erie 13-5 in the first period and took a 3-0 lead into the intermission.

Just over two minutes into the second period, Saginaw goaltender Tristan Lennox was tested by Erie’s Austen Swankler with a point-blank chance.  The Erie centerman came off the bench and intercepted a Spirit clearing attempt to hold the puck in the Saginaw end.  Swankler drifted down to the left face-off circle and unleashed a wrist shot that Lennox denied with a pad save to keep Saginaw ahead by three-goals.

The Otters got on the scoreboard 9:40 into the second period on Mathew MacDougall’s third goal of the season.  Noah Sedore dumped the puck down to Daniel D’Amico in the Saginaw left corner, who sent a backdoor pass to the Spirit slot.  MacDougall one-timed the puck that just floated over Lennox’s sliding pad to cut the Spirit lead down to two goals.

On the power play, Cole Perfetti nearly put his second goal of the game after a love pass up ice from Saginaw goaltender Lennox.  Perfetti received the pass in the neutral zone and dashed into the Otters zone.  The Spirit forward used the Erie defenseman for a screen and fired a puck through his legs that just clanked off the right post into the corner.

Erie cut the Saginaw lead to one-goal with 1:39 left in the middle frame after the Spirit was caught on a line-change.  MacDougall came down the left-wing on a three-on-two rush and dropped a pass off the Emmett Sproule, who trailed the play.  Sproule waited for the play to develop in front of Lennox and fired a shot from the top of the right circle that just squeaked pass the Saginaw netminder to make it a 3-2 game.

The shots-on-goal were much closer in the second period of play, with the slight 15-14 edge to the Otters, but the Spirit took a 3-2 lead into the final period.

Just under two minutes into the final frame, Mason Millman nearly extended the Spirit lead on a rush with forward Danny Katic.  Katic made a move around a defenseman upon entry into the Erie zone and dished off a pass to Millman, who flew up the left wing.  Millman used his body to protect the puck and cut towards the Otters slot, the Saginaw defenseman tried to pull the puck around Campbell but could not tuck the puck around the Erie goaltender.

Saginaw goaltener Lennox kept the Spirit on top with a save just shy of the five-minute mark of the third period on Erie Otters leading scorer Maxim Golod.  After a Saginaw turnover in the neutral zone, Golod came down on Lennox with the Spirit defense on the chase.  Golod’s wrist shot from the left circle was handled with a glove save by Lennox to keep Saginaw ahead by a goal.

Captain Damien Giroux gave the Spirit back a two-goal lead 5:35 into the third period with his team-leading 30th goal of the season.  Giroux passed off the puck to Dexter, Michigan native D.J. Busdeker at the Erie blueline and the two came down on a two-on-one rush.  The overage forward Busdeker drew the Otters defenseman’s attention and pass the puck across to Giroux, who drove the net and one-timed the puck past Campbell to make it 4-2 Saginaw.

The Spirit captain Giroux extended the Saginaw lead 9:10 into the third period with his second goal of the game off a deflection.  Forward Camaryn Baber passed the puck back to Riley Webb at the point, who deked a Erie forward to gain position and fire a wrist shot.  Giroux, who was parked in front of the net, deflected the puck past Campbell for the 5-2 Saginaw advantage.

After a Saginaw turnover at the Erie blueline, Daniel D’Amato cut the Saginaw lead back to two goals with his 15th goal of the season.  D’Amato led Brennan Sellan with a pass and the Erie forward came down on a two-on-one rush.  After the play nearly busted, Sellan sent a turnaround pass into the Saginaw slot where D’Amato one-timed into the Saginaw net.

The Spirit return to action Friday, February 7 when the travel to Budweiser Gardens in London, Ontario to take on the Midwest Division’s London Knights.  Puck drop for the fourth and final meeting of the season begins at 7:30 p.m.  The Spirit are 2-1-0-0 in the first three games against the Knights; however, they did suffer a defeat on the road in London back on October 25.

Saginaw returns home to The Dow Event Center Saturday, February 8 when they host the Guelph Storm for Talk Today, Hope for Tomorrow Night presented by Barb Smith Suicide Resource and Response Network.  There is a 7:05 p.m. puck drop for the teams fourth and final meeting of the season.