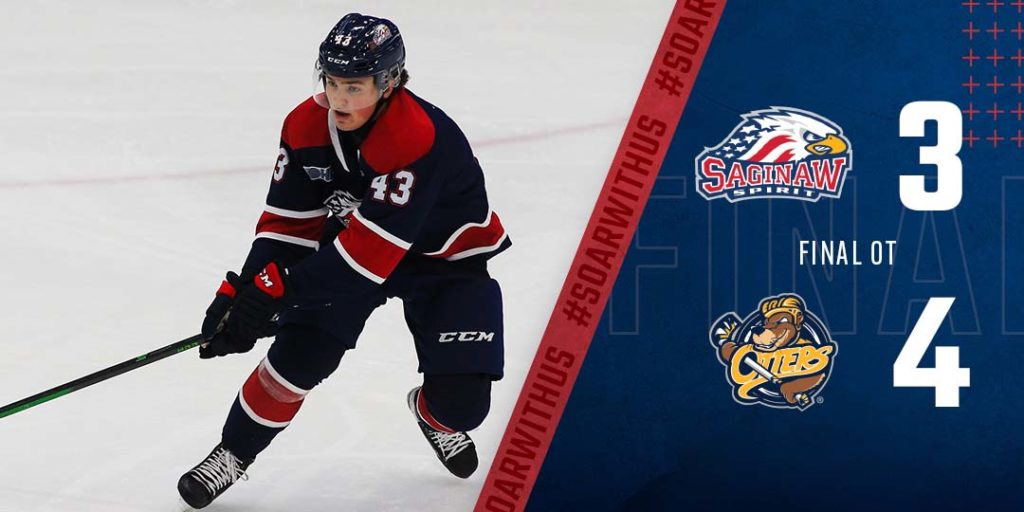 Erie, PA – The Saginaw Spirit were stopped from continuing their winning streak to three games, as the Erie Otters took the first game of a back-to-back with the Spirit by a 4-3 score in overtime in front of 3,623 fans at the Erie Insurance Arena in Erie, Pennsylvania.

After the Spirit took the lead two separate times in the third period, it was the Otters who stormed back to answer both times. With the score tied at 3-3, Brendan Sellan was awarded a penalty shot with just 17 seconds remaining in overtime and backhanded the puck past Spirit rookie goaltender Andrew Oke.

Matyas Sapovaliv (2), Pavel Mintyukov (1), and Nick Wong (1) scored for the Spirit in the defeat. Andrew Oke made 32 saves in his very first OHL appearance.

With electricity in the air, the home opener for the Otters took place on Saturday and the Spirit were once again the opponent. Saginaw was the last team to play the Otters Erie Insurance Arena before the pandemic canceled the remainder of the 2019-20 season, and the full 2020-21 season.

At 9:10 of the opening period, overage Brendan Sellan broke in behind the Saginaw defense and beat Oke over his shoulder to put Erie out front. Erie outshot Saginaw in the opening frame, 12-6, but thanks to the goaltending of Oke, the Spirit only trailed by that 1-0 score after one period.

The Spirit were given a power play opportunity nearly midway through the second period that Matyas Sapovaliv made the most of. His second powerplay goal in the last two games tied the score at 7:23. The rest of the period featured good goaltending and strong team defense from both sides, stalling the offensive output for the remainder of the period.

Less than one minute into the third period, 2022 NHL Draft ‘B’ prospect Pavel Mintyukov sniped home his first OHL goal on a perfect over the glove of Lalonde, putting the Spirit up, 2-1. After an Otters power play goal tied the game at three, Nick Wong scored his first goal as a Spirit just 33 seconds later to make it 3-2. Later in the third period, it was Wong who would take a penalty and the Otters tied the game on Brett Bressette’s second power play goal against Saginaw in their last two meetings.

In overtime, Saginaw had full control and plenty of chances to win, but it was Sellan who broke in and drew a penalty shot, that allowed the Otters to walk away with two points.

Saginaw now has at least one point in each of their last three games with a record of 2-1-1-0. They will finish their three-game, road swing tomorrow afternoon against the Erie Otters. Puck drop is scheduled for 2:00 p.m.