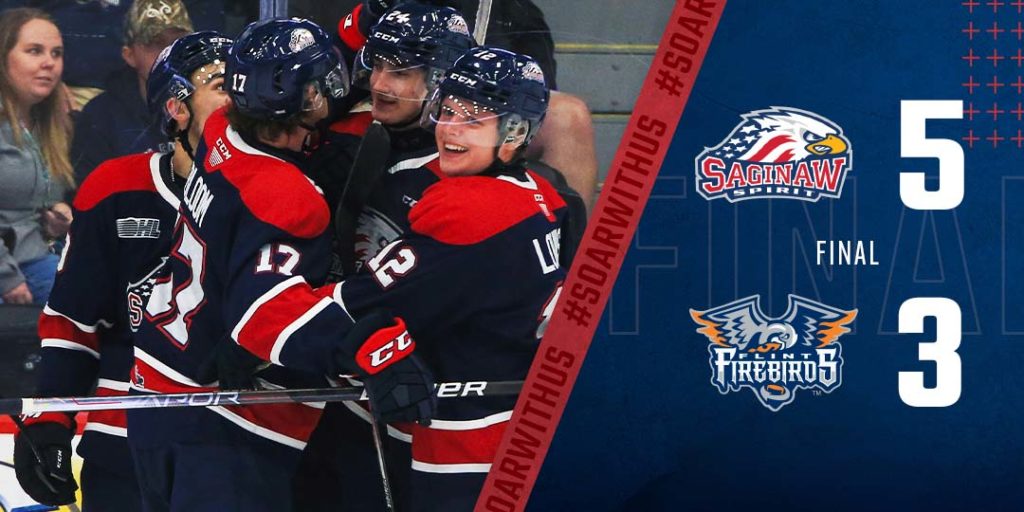 Flint, MI – The Saginaw Spirit extending their winning streak to eight straight at The Dort Financial Center in Flint, Michigan with a 5-3 victory on Wednesday night.

The Spirit had an early opportunity to take a 1-0 lead when the puck bounced off rookie Luke McNamara near the Flint net and ended up hitting the post. This stretch of Spirit bad luck would continue, as Flint’s Coulson Pitre would open the scoring at 4:03 of the first period. Just 2:57, Pitre recorded his second goal of the game, third of the season, when he deflected a Luca D’Amato shot behind Spirit goalie Lennox. The Spirit would then be whistled for a 2:00 penalty on Pacey Schlueting, but Saginaw gained momentum by killing it off. Saginaw struck just moments after the kill on an Ethan Klein goal for his first of his OHL career. Klein’s goal from in the crease was assisted by Duhart and McNamara. Just 1:14 later, the Spirit would tie on a power play from 2021 first round pick Luke McNamara for his first of his OHL career. A quick wrist shot from the circle past Cavallin was assisted by T-Bone Codd and Pavel Mintyukov. The Spirit and Firebirds went to the dressing room tied at two goals after 20 minutes of play.

Winnipeg Jets prospect Dmitry Kuzmin wasted little time in the second putting the ‘Birds back in front. His wrist shot from the left circle beat Lennox on his blocker side. Again, the Spirit power play would strike. Matyas Sapovaliv scored his first OHL goal to tie the game at 19:20. Sapovaliv was set up by Josh Bloom and Duhart.

Early in the third period, the Spirit went out front for the first time in the game at 51 seconds with Josh Bloom’s first goal of the season. Dalton Duhart fought off multiple Firebird checks to break down the right side and pass over to a wide-open Bloom for the score. That is a lead the Spirit would not relinquish. Calem Mangone scored a beautiful goal on the backhand at 17:05 to provide the Spirit with an insurance goal and a 5-3 cushion. When the Firebirds pulled their goaltender late, they took their second, Too many Men bench penalty of the game and negated their opportunity to try and tie.

Saginaw returns to The Dow Event Center on Wednesday, Oct 27 to face the Flint Firebirds at 7:05 p.m. Student Rush / Military tickets will be on sale for $7 with proper Identification courtesy of Reder Landscaping.