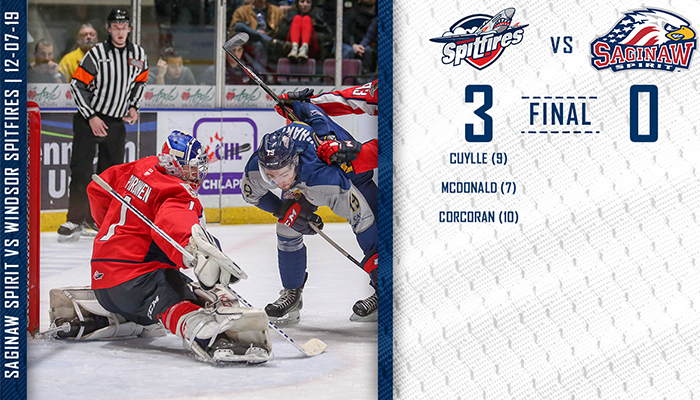 Saginaw Spirit goaltender Marshall Frappier was tested early in the first period. With the Spitfires firing seven shots on goal before the midway mark of the period, Frappier was able to stop all attempts and keep the game scoreless.

Danil Antropov looked to get the Spirit on the board first early in the period. Off to the left side of the net, Antropov took an angled shot that hit the post.

The first goal of the game came with 7:03 remaining in the period. Will Cuylle followed Tyler Angle into the Spirit’s zone. Angle stopped at the top of the right-wing circle and sent a cross-ice pass to Cuylle at the top of the left-wing circle where he then sniped a wrist shot past Frappier’s right shoulder for the 1-0 lead.

The Spirit went into the first intermission trailing in shots, 16-6.

With 9:13 left in the second period, Chris Playfair won the face-off at the left-wing circle in the Spirit’s zone directly back to Kyle McDonald, who sent a quick wrist shot past the right shoulder of Frappier, which extended the Spitfires lead to 2-0.

While Jean-Luc Foudy was on a breakaway, Dexter, Michigan native D.J. Busdeker cross-checked the Spitfires forward and Foudy was rewarded with a penalty shot at the end of the period. Foudy skated up to the net and tried to wrap the puck around Frappier’s pads, but was unable to find the back of the net.

The Spitfires outshot the Spirit during the second period, 6-4.

A little under six minutes into the third period, the Spirit almost got on the board. From the left-wing circle, Antropov shot the puck. New York Islanders draft pick Cole Coskey tried to tip the puck in, but it went wide.

With only 3:51 remaining in regulation, the Spitfires found the back of the net again. Connor Corcoran skated to the middle of the right-wing circle and shot the puck top-shelf glove side which extended their lead to, 3-0.

The Spirit fell to the Windsor Spitfires in a 3-0 shutout loss.

The Spirit start a two-game road trip on Thursday in Windsor, Ontario when they face-off against the Spitfires for the back-end of a home-and-home at the WFCU Centre. Puck drop will be at 7:05 p.m.

The Spirit will be back at home on Saturday, December 14 to face-off against the West Division rival Flint Firebirds. Puck drop from The Dow Event Center will be at 7:05 p.m. This game marks the return of the annual Teddy Bear Toss presented by the Jayden Lamb Foundation.