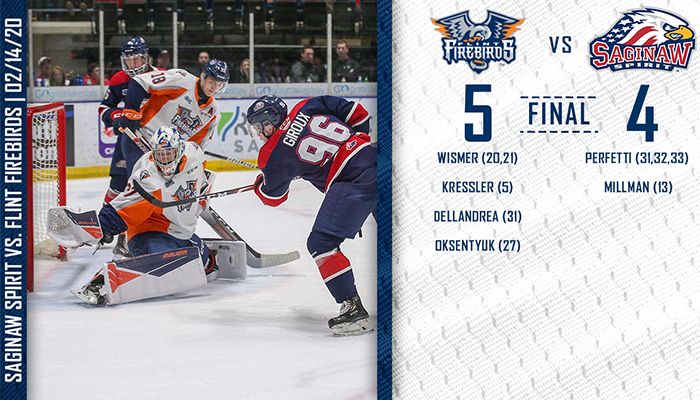 Saginaw, MI. – The Saginaw Spirit dropped the seventh installment of the Coors Light I-75 Divide Rivalry 5-4 against the in-state rival Flint Firebirds in front of 4,688 fans at The Dow Event Center in Saginaw, Michigan on ‘BizNasty Night’  beginning Ice Blast Weekend.

In the opening shift, Carolina Hurricanes first round pick Ryan Suzuki nearly gave the Spirit the lead just under a minute into play.  On a give-and-go with New York Islanders prospect Cole Coskey, Suzuki received a pass upon entry into the Flint zone and split the Firebirds defense.  The Spirit centerman fired a backhander from the right face-off circle that was fought off by Firebirds goaltender Luke Cavallin to keep the game scoreless.

The Spirit opened the scoring 4:10 into the first period on fourth rated North American 2020 NHL Draft prospect Cole Perfetti’s 31st goal of the season.  A forecheck from Suzuki forced Flint Firebirds defenseman Vladislav Kolyachokok to turn the puck over at the right face-off circle of the Flint zone.  Overager D.J. Busdeker pounced on the loose puck and tipped it over to Perfetti, who cut towards the net.  Perfetti lifted a one-timer over Cavallin’s sliding right pad to give the Spirit a 1-0 lead.

Flint answered just 1:16 later with Jack Wismer’s 20th goal of the season off a Saginaw offensive zone turnover.  A miscommunication by the Spirit defense led to a three-on-two rush, Firebirds forward Cody Morgan sped into the Saginaw zone down the right-wing.  Morgan hit the trailer Wismer with a pass middle point and the right-winger drifted down to the top of the right face-off circle.  Wismer let loose a wrist shot that beat Spirit goaltender Marshall Frappier over his right shoulder and banked into the Spirit net off the right post to tie the game.

Firebirds rookie Braeden Kressler gave Flint the 2-1 lead 7:00 into the opening frame with his fifth goal of the season.  Overage forward Jack Pierce hit the Saginaw zone on a two-on-one rush with Kressler and fired a shot from the right circle that Frappier denied with a blocker save.  The puck flew towards Kressler in the left circle and the centerman knocked the puck out of the air with his glove that deflected into the net off Frappier’s goalie stick to give the Firebirds a one-goal lead.

Captain Damien Giroux nearly tied the game midway through the first period off a Flint turnover.  Dexter, Michigan native Busdeker took the puck away from a Firebirds defenseman in the right face-off circle and fired a quick pass to Giroux in front of the Flint net.  The Minnesota Wild prospect Giroux pulled the puck around his body and tried to tuck the puck inside the left post but was stopped by Cavallin’s outstretched pad and covered.

Flint took the 2-1 lead into the first intermission despite the 12-10 shot advantage for Saginaw after 20 minutes of play.

The teams traded scoring chances just under five minutes into the middle frame, but the goaltenders held tough.  New York Islanders signee Bode Wilde stickhandled through the neutral zone and toe dragged around a defenseman to split the Spirit defense.  The Plymouth, Michigan native Wilde took a wrist shot from the top of the right circle that Cavallin stopped with a pad save.

Flint counter attacked and Dallas Stars first round pick Ty Dellandrea was hit with a long stretch pass for a breakaway opportunity.  The Firebirds captain attempted to beat Frappier with a wrist shot, but the Saginaw netminder closed his pads and held on to the puck.

Saginaw Spirit leading scorer Perfetti nearly notched his second of the game on an individual effort eight minutes into the second period.  The Whitby, Ontario native stickhandled into the neutral zone and accelerated into the Firebirds end.  Perfetti split the Flint defense and fought off a Firebirds defender to tip a one-hand chance that Cavallin fought off and held for a whistle.

Flint’s Wismer extended the lead to two goals 13:33 into the second period with his second goal of the game and 21st of the season.  A Spirit defenseman’s clearing attempt was knocked down by Cody Morgan near the left point and the Flint centerman quickly centered the puck to the Saginaw slot.  Wismer one-timed the puck under Frappier’s sliding pad for the 3-1 Flint Firebirds advantage.

Just 51 seconds later, Saginaw responded with Cole Perfetti’s second goal of the game to cut the Flint lead to one-goal.  Saginaw, Michigan native Mitchell Smith passed the puck to Perfetti in the neutral zone and the Saginaw sniper transitioned into the Flint zone.  The Firebirds defense gave the Spirit forward space and Perfetti sniped a wrist past Cavallin off the right post into the net.

After a too-many-men bench minor to the Spirit, Flint captain Dellandrea made it a 4-2 Flint advantage with his 31st goal of the season with 2:40 left in the second frame.  St. Louis Blues prospect Tyler Tucker dropped a puck off to Riley McCourt at the left half-wall.  McCourt fired a cross-ice pass to for a one-timer from Dellandrea at the backdoor for the two-goal lead.

The Spirit outshot the Firebirds 27-20 through two periods, but Saginaw went into the second intermission down, 4-2.

Philadelphia Flyers prospect Mason Millman cut into the Firebirds lead with his 13th goal of the season just 2:29 into the third period.  Grand Blanc, Michigan native Dalton Duhart entered the Firebirds zone on a three-on-two rush.  Duhart passed the puck to rookie T-Bone Codd, who dropped a pass over to the trailer Millman.  The Saginaw blueliner ripped a shot from the top of the circle to make it a 4-3 game.

The Spirit nearly tied the game midway through the third period, after Perfetti took the puck away from a Flint player at the Firebirds blueline.  As Perfetti was hauled down, the Saginaw forward poked the puck over to Giroux, who cut towards the Flint goal.  Giroux attempted to shoot the puck from the left circle, but a Firebirds defenseman tied up the Saginaw captain and the puck rolled wide.

With just nine seconds left in regulation, Cole Perfetti completed his second career OHL hattrick off a tick-tack-toe passing play.  Cole Coskey dropped the puck off the Ryan Suzuki in the right circle and the London, Ontario native centered a puck Perfetti just left of the crease.  Perfetti one-timed the Suzuki pass into the open left side of the net for his 33rd goal of the season, which ties Giroux for the team-lead.

The Spirit had a chance in the final seconds to even the score, but Cavallin continued his strong play earn his first victory against the Saginaw Spirit.

Ice Blast Weekend continues Saturday, February 15 when the Saginaw Spirit host the Kitchener Rangers for Credit Union Night at The Dow Event Center in Saginaw, Michigan.  Puck drop for the fourth and final meeting of the season begins at 7:05 p.m.  The Spirit are 1-1-1-0 in the first three matchups of the season against the Kitchener Rangers.  Former Detroit Red Wings defenseman Nicklas Kronwall will be signing autographs in the Budweiser Red Room between 5:30 and 7:00 p.m.