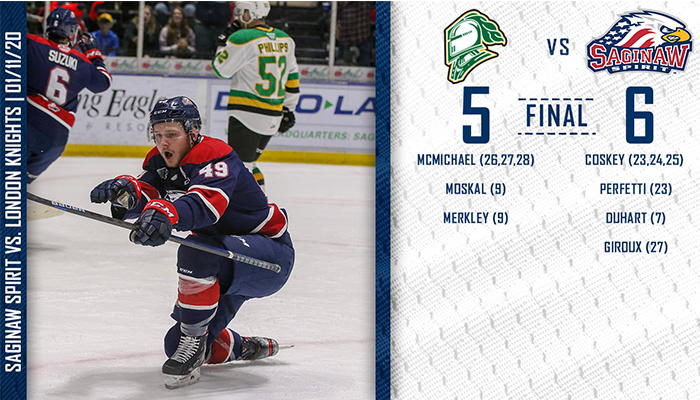 Saginaw, MI. – The Saginaw Spirit snapped the London Knights five-game winning streak with a 6-5 victory in front of 3,905 fans at The Dow Event Center Saturday evening.

In his first shift at The Dow Event Center, Carolina Hurricanes signee Ryan Suzuki nearly buried his first goal as a Saginaw Spirit.  2020 NHL Draft prospect Cole Perfetti sent a pass back to Mason Millman at the London center point.  The Philadelphia Flyers prospect Millman’s shot was knocked down by Suzuki and the Carolina Hurricanes first round pick fired a backhand shot that overage goaltender Dylan Myskiw stopped with his right shoulder.

Suzuki had another scoring opportunity just over six minutes into the first period on tick-tack-toe passing.  Cole Coskey sent a pass across the slot and through traffic to Perfetti to the right of the London net.  Perfetti turned the puck back and found the London, Ontario native Suzuki as he cut towards the Knights goal.  Suzuki fired a point-blank wrist shot from the right face-off dot that Myskiw stopped with a blocker save.

After Chicago Blackhawks signee Alec Regula’s check-to-the-head and bench minor penalties to the London Knights, the Spirit took a 1-0 lead on Coskey’s 23rd goal of the season.  Perfetti fired a pass back to Millman at the London point, who quickly sent a pass for Coskey to one-time from the left face-off dot into the open left side of the net to put the Spirit ahead by one-goal.  With the goal, Cole Coskey passed Florida Panthers’ Vince Trocheck and Tom Pyatt in the Saginaw Spirit all-time goal scoring list.

With an assist on Saginaw’s goal, Perfetti extended his career-high point streak to 11 games.

In the final minute of the first period, Coskey tallied his second goal of the game to extend the Saginaw lead to 2-0.  The right-winger intercepted pass at the London point and fired a wrist shot from the top of the circle for his 24th goal of the season.  Coskey past Jack Combs for third all-time with 96 goals as a Saginaw Spirit on that late goal.

The Knights first shot of the game came at the 9:09 mark of the first period and which led to a 17-12 shot advantage after 20 minutes of play.

After a slashing penalty to Coskey just 20 seconds into the second frame, 2019 Washington Capitals first round pick Connor McMichael cut into the Spirit lead with a powerplay goal 30 seconds into the second period.  San Jose Sharks signee Ryan Merkley floated a pass over to McMichael at the right half-wall.  The Ajax, Ontario native McMichael sniped a wrist shot over Saginaw goaltender Tristan Lennox’s right shoulder for his 26th goal of the season.

The Knights tied the game on center Billy Moskal’s ninth goal of the season 9:59 into the second period.  Bryce Montgomery’s point shot was blocked by a pad save from Lennox but rebounded in the Spirit slot.  Moskal jumped on the puck and hammered it into the back of Saginaw’s net to tie the game 2-2.

Just 30 seconds after Moskal’s goal, Cole Coskey gave the Spirit back the lead with his second career OHL hattrick.  As 2019 Carolina Hurricanes first round pick Ryan Suzuki entered the London zone, he sent a cross ice pass to Cole Perfetti, who flew down the left wing.  Perfetti’s shot from the left circle was blocked but the left-winger regained control behind the Knights goal and centered a puck to the slot as he was tripped by a London defender.  Coskey pounced on the loose puck and jammed it into the goal to give Saginaw back the one-goal lead.

Connor McMichael notched his second goal of the night with 7:04 left in the second frame on a two-on-one rush.  Columbus Blue Jackets signee Liam Foudy crossed into the Spirit zone and was pressured by a Saginaw defenseman before he sent a saucer pass over to McMichael on the left circle.  McMichael fired a shot all alone in the slot that beat Lennox’s blocker to tie the game, 3-3.

Through two periods of play Saginaw and London was knotted up, 3-3 but the Spirit had a 26-24 shot advantage after 40 minutes of play.

London’s McMichael completed his hat trick just 2:13 into the third period to give the Knights a 4-3 lead.  After a turnover in the Saginaw zone McMichael lost control of the puck in the Spirit slot but a Saginaw defenseman’s attempted slot clear went into their own net for the goal.

Saginaw Spirit leading scorer Cole Perfetti tied the game 10:17 into the third period for his 23rd goal of the season.  After a point shot from overager D.J. Busdeker pinballed around the London slot, Perfetti knocked the puck out of midair into the London net to tie the game, 4-4.

Grand Blanc, Michigan native Dalton Duhart provided the go-ahead goal on a two-on-one rush with 6:05 left in regulation.  Duhart and forward Jake Goldowski sped into the London zone on an odd-man rush and the Knights defender fell down to take away the pass.  The Saginaw center sniped a wrist shot top-shelf for his seventh goal of the season to give the Spirit a 6-5 lead.

After penalties to Mitchell Smith and Mason Millman the Knights pulled their goaltender for the six-on-three advantage, captain Damien Giroux added a shorthanded empty net goal for a 6-4 Saginaw Spirit lead.

Still six-on-three London converted on the power play to cut the Spirit lead down to a goal with 1:07 remaining in regulation.  Ryan Merkley walked across the blueline to look for an opening and fired a wrist shot through a screen past Lennox for his 10th goal of the season.

Lennox and the Saginaw defense withstood a final barrage from the Knights for a 6-5 victory.

The Spirit finish the home-and-home series Saturday, January 18 against the Soo Greyhounds for the sixth matchup of the season.  Puck drop from the Wendler Arena inside The Dow Event Center is at 7:05 p.m.