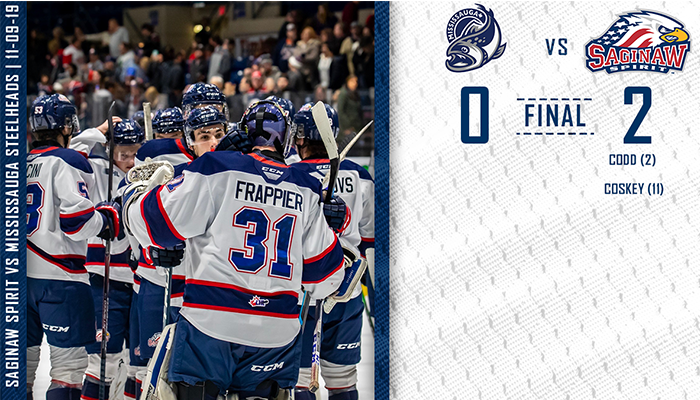 SAGINAW, MI. – The Saginaw Spirit put Mississauga’s offense in a deep freeze on Frozen Night at The Dow Event Center with a 2-0 shutout victory over the Mississauga Steelheads Saturday evening.

Saginaw Spirit goaltender Marshall Frappier stopped all 24 Mississauga shots for his second shutout of the season and third of his career.

The Spirit was on the attack early when Dexter, Michigan native D.J. Busdeker nearly put the Spirit up just over three minutes into the open frame on a nice set up by New York Islanders prospect Cole Coskey.

Coskey made a move around a Steelheads defender to cut towards the center of the ice and dished a pass over to Busdeker streaking into the Mississauga slot.  The overager Busdeker flipped a backhand shot past Steelheads goaltender Kai Edmonds off the right post.

Rookie Ethan Cardwell also rang a shot off the post with just over five minutes left in the first period.  The Saginaw forward made a nice move in the right corner to cut towards the Mississauga net and sent a backhand shot over Edmonds left shoulder but deflected off the post.

The Spirit had another scoring opportunity with less than a minute remaining in the first period.  After a Steelheads player attempted to clear, forward Danny Katic kept the puck in the Mississauga zone at the blue line.  Katic deked around a defender and skated down to the left face-off dot for a wrist shot that Edmonds just fought off with a pad save.

Saginaw had eight shots in the first period while they yielded just two shots to the Steelheads.

With Mississauga’s Charlie Callahan in the penalty box for a cross-checking call, the Spirit rang two more shots off the Mississauga post.

New York Islanders draft pick Blade Jenkins’ wrist shot from the left face-off circle rank off the crossbar into the Steelheads’ slot.  On the rebound, Cardwell won possession of the puck and sent a turnaround shot that beat Edmonds but clanked off the right post into the corner.

On the same power play, the Steelheads had a great shorthanded scoring opportunity on a two-on-one rush.  Former Saginaw Spirit Aidan Prueter skated down the right side and sent a saucer pass over for overager Calvin Martin’s one-timer that was stopped by a Marshall Frappier glove save.

The Spirit finally broke the tie 13:41 into the second period on ‘T-Bone’ Codd’s second goal of the season.  Defenseman Roberto Mancini dropped the puck off to Katic in the right circle and Katic sent a pass to the slot.  The Saginaw rookie Codd drove the net and muscled the puck across the line for the 1-0 Spirit lead.

Saginaw made it a 2-0 lead just 63 seconds later with Coskey’s 11th goal of the season.  Directly off a lost face-off in the Mississauga zone, Katic stole the puck from a Steelheads defenseman and slid a pass over to Coskey to the left of the goal.  The Zion, Illinois native Coskey’s wrist shot beat Edmonds short-side top-shelf for the goal.

Saginaw took the two-goal lead into the second intermission and dominated the Steelheads, 24-7 in shots through two periods of play.

The Spirit almost made it a three-goal lead in the first minute of the third period.  Belarusian defenseman Ilya Solovyov led Jenkins with a nice pass for a breakaway chance.  The Spirit forward attempted a deke to the backhand but the Steelheads goaltender Edmonds kept the puck out with a stick save.

Frappier made a great save on a three-on-one rush for Mississauga just under eight minutes into the third period.  Overager Liam Ham sent a cross ice pass over to 2020 NHL Draft prospect Ty Collins for a shot from the right face-off dot that was denied by a sliding glove save by Frappier.

With captain Damien Giroux in the penalty box, Frappier came up big for the Spirit on a wrist shot from Dallas Stars prospect Thomas Harley.  Harley’s shot through traffic was grabbed by a nice glove save by the Saginaw netminder to protect the shutout.

The Spirit goaltender Frappier stopped all 17 third period shots from the Steelheads to complete his second shutout of the season.

The Saginaw Spirit hit the road to take on the West Division rival Windsor Spitfires Sunday, November 10 for the first meeting of the season.  Puck drop from the WFCU Centre in Windsor, Ontario is at 4:05 p.m.

Fans can catch the action on the flagship WSGW Newsradio 100.5 FM and www.wsgw.com with the voice of Saginaw Spirit hockey Joey Battaino on the call.  “Countdown to Face-off” begins 15 minutes prior to puck drop.

The Spirit return home Thursday, November 14 to host the East Divison’s Ottawa 67’s for House Divided Night at The Dow Event Center.  Puck drop for the first of two meetings this season begins at 7:05 p.m.