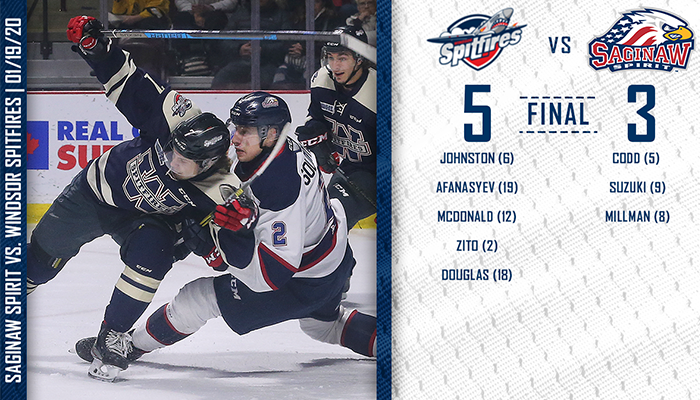 Saginaw goaltender Tristan Lennox was tested by the Windsor Spitfires on the opening shift of the game with a two-on-one rush.  ‘A’ rated 2020 NHL Draft prospect Will Cuylle flew down the left-wing into the Saginaw zone with Windsor captain Luke Boka on the right.  Saginaw defenseman Ilya Solovyov effectively took away the pass option for Cuylee and the Windsor left-winger fired a wrist shot from the left circle that Lennox engulfed into his equipment to keep the game scoreless early.

The Spirit lit the lamp 6:49 into the first period for the 1-0 on rookie T-Bone Codd’s fifth goal of the season.  Fourth ranked North American 2020 NHL Draft prospect Cole Perfetti fed Carolina Hurricanes signee Ryan Suzuki with a pass at the right circle.  The Saginaw center Suzuki circled towards the center of the Windsor zone and let a wrist shot fly that beat Spitfires netminder Kari Piiroinen but rang off the left post.  The puck was loose in the Windsor crease and the Brighton, Michigan native Codd was able to poke the puck into the net for the goal.  With the assist, Suzuki notched his 150th career Ontario Hockey League (OHL) point.

Just 1:58 later the Spitfires answered to tie the game 1-1 on rookie Wyatt Johnston’s sixth goal of the season.  Windsor defenseman Grayson Ladd intercepted a Saginaw pass in the Spirit defensive zone and sent a pass to Johnston at the left circle.  Johnston one-timed the cross ice pass into the open side of the net to tie the game with 11:13 left in the first period.

After New York Islanders prospect Blade Jenkins was called on a slashing penalty in the final minute of the first period, Nashville Predators second round pick Egor Afanasyev capitalized on the man-power advantage for his 19th goal of the season.  Off a face-off won by Johnston, 2020 NHL Draft prospect Ruben Rafkin unleashed a slapshot from the point that Lennox denied with his blocker.  The rebound bounced right to Afanasyev at the right face-off dot, where the forward sent a quick shot past the sliding Lennox for the 2-1 lead with just 19 seconds left in the opening frame.

Windsor took the 2-1 lead into the first intermission after they outshot the Spirit, 12-10.

The Spitfires extended their lead just 2:12 into the second period on Kyle McDonald’s 12th of the season.  The 2020 NHL Draft prospect flew down the right wing and fired a wrist shot from the right face-off dot that beat Lennox over his right shoulder to give the Spitfires a 3-1 lead.

Windsor took a 4-1 lead just 1:37 later with Pasquale Zito’s second goal of the season.  The Windsor right-winger flew down the left wing into the Saginaw zone and Zito sniped a wrist shot top shelf short side over Lennox’s right shoulder for the goal.

After Zito’s goal, goaltender Marshall Frappier entered the game in relief of Lennox.

New York Islanders prospect Cole Coskey and Perfetti nearly cut into the Windsor lead but each had shots clank off the post on the same shift.  The Zion, Illinois native Coskey’s shot from the slot beat Piiroinen’s left shoulder but hit the right post.  Perfetti quickly slapped the rebound over the Spitfires goaltender off the left post and Windsor was able to clear.

Frappier was tested midway through the second period with a breakaway opportunity from ‘A’ rated 2020 NHL Draft prospect Jean-Luc Foudy.  Foudy was able to get behind the Spirit defense on a breakaway and the forward attempted to deke Frappier but Saginaw’s netminder poked the puck away from Foudy with his stick.

After Dalton Duhart was released from the penalty box, the Saginaw forward poked the puck off a Windsor player’s stick in the neutral zone.  Cole Perfetti gained control of the puck and attacked into the Spitfires end on a two-on-one rush with Ryan Suzuki.  Perfetti feathered a pass over to the 2019 Carolina Hurricanes 28th overall pick Suzuki, who sent a wrist shot from the right circle that beat Piiroinen under his blocker for his ninth of the season to cut the Windsor lead back down to two goals.

In the third period of play, Saginaw forward Camaryn Baber nearly scored for the Spirit just over three minutes into play.  Baber used his speed to split the Spitfires defense and deked to the fore hand on Piiroinen but launched the shot over the net.  The Spirit centerman drew a penalty on the play however, with a slashing minor by Dylan Robinson,

While on the man-power advantage, Philadelphia Flyers prospect Mason Millman brought the Spirit back to within a goal on his 12th goal of the season.  Suzuki skated behind the left side of the Spitfires net and reversed the flow with a no look pass into the Windsor slot.  The pass tipped off Perfetti’s stick back to Saginaw defenseman Millman at the point, who fired a wrist shot through a screen in front of the net past Piiroinen for the goal.

Frappier made several saves in the third period to keep the Spirit in the game behind just a goal.  Forward Pasquale Zito flew up the left side wall around a Saginaw defenseman and centered a pass to the Spirit slot.  Dallas Stars prospect Curtis Douglas fired a one-timer from in close but Frappier was able to slide across to keep the puck out of the Spirit net.

Windsor was able to put a goal past Frappier with 6:57 left in regulation on Douglas’ 18th goal of the season.  Defenseman Thomas Stevenson’s point shot squeaked through Frappier’s pads and sat behind the netminder in the Saginaw crease.  Douglas was able to get his stick through and poke the puck into the net for the 5-3 Windsor lead.

After a high-sticking minor to Tyler Angle, the Spirit were awarded with their fourth power play opportunity.  Saginaw won the face-off back to Cole Coskey who went wide around a defender and centered a pass to Perfetti, who waited in the Windsor slot.  The Spirit leading scorer Perfetti fired a quick shot that Piiroinen just kicked away with a pad save to keep it a two-goal deficit.

Saginaw pulled Frappier with just over a minute left in regulation, but the Spirit were unable to convert with the extra attacker.

The Saginaw Spirit will travel to eastern Ontario to take on the Peterborough Petes of the East Division Thursday, January 23 for the second and final meeting of the season.  The Spirit will look to avenge the shutout loss they suffered at the hands of the Petes back on October 9.  Puck drop from The Peterborough Memorial Centre in Peterborough, Ontario is at 7:05 p.m.

The Saginaw Spirit’s next home game set for February 1 when the Spirit host the Midwest Division’s Erie Otters from the Wendler Arena inside The Dow Event Center.  Puck drop for the second meeting of the season starts at 7:05 p.m.

February 1 marks the return of the 13th annual Shocks and Saves Night presented by the Pulse 3 Foundation at The Dow Event Center.  Prior to the battle between the Spirit and Otters, the Detroit Red Wings alumni and local EMT’s and doctors take part in a game to raise funds in order for Great Lakes Bay public facilities to be equipped with Automatic External Defibulators or AED’s.  Puck drop for the 13th annual Shocks and Saves Charity game begins at 4:30 p.m.