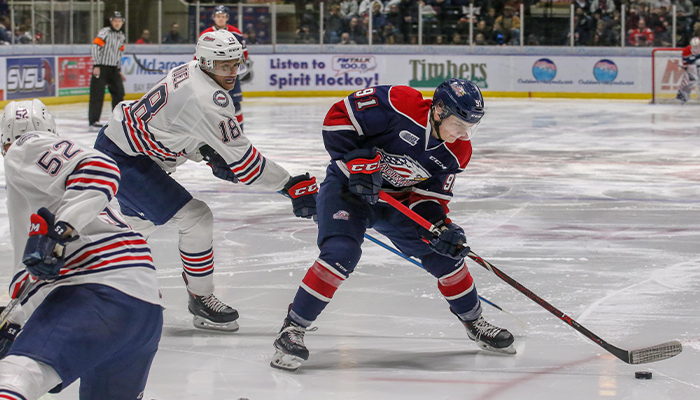 Oshawa, ON. – In a meeting of the Ontario Hockey League’s two best teams, the first-place Saginaw Spirit face-off against the first-place Oshawa Generals for final game of their first extended road trip of the season. The puck drop is at 6:05 p.m at the Tribute Communities Centre in Oshawa, Ontario.

Fans can tune into the action live on 100.5 Newsradio WSGW, www.wsgw.com, and iHeartRadio beginning at 5:50 p.m. with the voice of the Spirit, Joey Battaino.

We invite #SpiritNation to visit the Buffalo Wild Wings location at 2690 Tittabawassee Road in Saginaw and join the official “Watch Party” for all Spirit away games. Admission is free of charge.

Following Sunday’s game in Oshawa, the Spirit will return home on Wednesday night to play the Peterborough Petes at 7:05 p.m at The Dow Event Center.

The Spirit began their three-game weekend on Thursday picking up victories against the Niagara IceDogs, and Friday over the Erie Otters.

On Thursday, the Spirit traveled to St. Catharines, Ontario to play the IceDogs. Captain Damien Giroux and rookie Ethan Cardwell led the way for a 5-4 victory for the Spirit. This was goaltender Marshall Frappier’s second game in net and his second win with the team. Saginaw native Mitchell Smith received his second point with the team this season by getting a goal. Dallas Stars draft pick Nick Porco added to the board with a tie-breaking goal. This was the second time this season the Spirit had a victory over the IceDogs with the first game ending in a 3-0 triumph.

On Friday, the Spirit traveled to Erie, Pennsylvania to play the Otters. Spirit goaltender Tristian Lennox faced many shots from the Otters early on in the game. Unable to block all of the shots, the Otters received the first goal of the game in the first. The Spirit evened out the score from a goal by D.J. King. Receiving his second goal of the season, Danny Katic broke the tie advancing the Spirit ahead. Giroux widened the gap with another goal. Jacob Goldowski received the puck from Camaryn Baber and got a goal that solidified the Spirits lead and earned Goldowski his first goal. The Spirit came out on top for the third game in a row winning 4-2.

The Oshawa Generals have won six consecutive games to start their season. The undefeated team is led in scoring by Montreal Canadiens prospect Allan McShane with 10 points.

Rookie Ethan Cardwell notched two goals during Thursday’s game against the IceDogs and followed it up with two assists on Saturday in Erie. Cardwell is currently ranked as the number seven rookie point scorer in the league. Cardwell also leads the league in shots on goal among rookies with a total of 15.