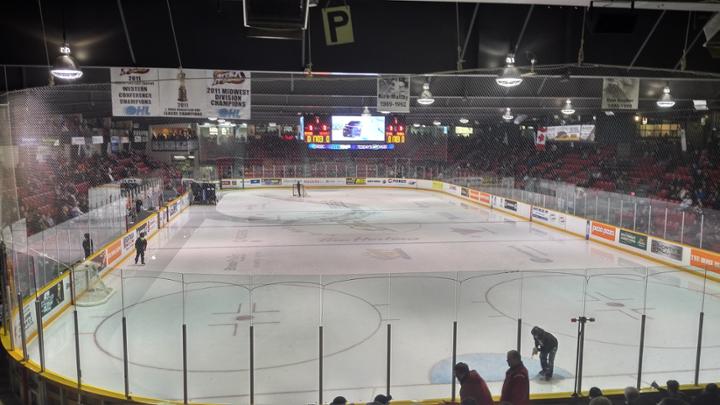 Saginaw came out victorious in the first matchup this season against Owen Sound 5-4 at home.

Fans can catch all the action on the flagship WSGW Newsradio 100.5 FM and www.wsgw.com with Countdown to Faceoff with James Paxson beginning at 7:15 p.m.

Spirit fans can visit the Buffalo Wild Wings location at 2690 Tittabawassee Road in Saginaw and join the official “Watch Party” for all Spirit away games. Admission is free of charge.

The Spirit have split the first two games of the road swing with a 8-3 victory over arch-rival Flint Firebirds on Wednesday and a 6-2 loss to the Midwest Division leading Guelph Storm Friday evening.

Top 2020 NHL Draft prospect Cole Perfetti extended his point streak to four games with a goal in the first period of Friday’s game against the Storm.  Since the first matchup versus the Owen Sound Attack back on November 21, Perfetti has six goals in just four games.  The Saginaw forward is eighth in the Ontario Hockey League (OHL) with 41 point in just 25 games this season.

Newly acquired Danil Antropov provided an assist in his Saginaw Spirit debut on Perfetti’s goal in the first period against Guelph.  The North York, Ontario native Antropov was acquired via trade with the Oshawa Generals for two draft picks.  Antropov scored 15 goals and 37 assists for a career-high 52 points last season for the Generals.

Grand Blanc, Michigan native Dalton Duhart provided an assist in the game against the Storm.  The Saginaw center has points in five of the last seven games for the Spirit.  Duhart tallied the eventual game-winning goal in the victory over the Owen Sound Attack.

Owen Sound’s Brady Lyle is ninth among OHL defenseman this season with 24 points.  The overage defenseman contributed an assist in the loss to the Saginaw Spirit earlier this season.

The Owen Sound Attack are coming off a 3-0 shutout loss to the Kitchener Rangers on the road Friday night.

Knoxville, Tennessee native Mack Guzda stopped 26 of Kitchener’s 28 shots in Friday’s defeat.  Guzda took the loss after he allowed five goals in the first matchup against the Saginaw Spirit this season.

Owen Sound Attack leading scorer Aidan Dudas collected a goal and assist in the loss against the Spirit back on November 21.  The Los Angeles Kings prospect has 11 goals and 19 assists for 30 points in 23 games.

Russian Sergey Popov also had a goal and assist in the first game against the Saginaw Spirit this season.  The left-winger leads the Owen Sound Attack this season with 20 assists in 24 games this season.

The Spirit return home Wednesday, December 4 when they matchup against the Guelph Storm in a make-up contest for the postponed game due to poor ice conditions back on November 2.  Puck drop from The Dow Event Center in Saginaw, Michigan begins at 7:05 p.m.

OHL 'On the Run' Player of the Week: Cole Perfetti
4 days ago

Game Day Preview: Battle of the West's best Saturday in Saginaw
6 days ago