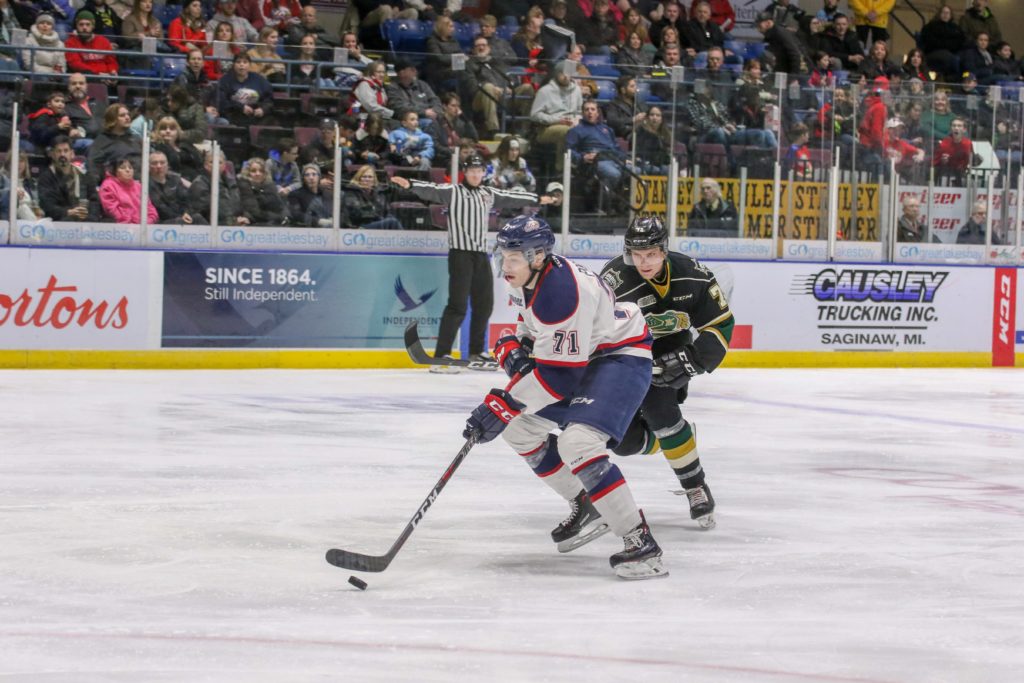 Saginaw, MI. – The Saginaw Spirit face-off against the London Knights for the first of four meetings this season Saturday evening. The puck drop is at 7:05 p.m at the Dow Event Center. The Spirit are proud to invite all UAW members to tonight’s game courtesy of Garber Automotive Group.

UAW members can get up to eight tickets courtesy of the Garber Automotive Group by showing any type of UAW Identification at the Saginaw Spirit Store on State St. prior to the game or the Will Call desk located inside the atrium at The Dow Event Center.

Fans can tune into the action live on 100.5 Newsradio WSGW, www.wsgw.com, and iHeartRadio beginning at 6:50 p.m. with the voice of the Spirit, Joey Battaino.

Following Saturday’s game, the Spirit will be on the road again to play West Conference rivals Sault Ste. Marie Greyhounds on Wednesday at 7:07 p.m. at the GFL Memorial Gardens.

On Wednesday evening, the Saginaw Spirit faced-off against the Peterborough Petes.

After the two teams battled to a scoreless draw at the end of two periods, it was the Petes who took over in the third.

Only 1:34 in to the final frame, Cameron Butler snapped in a wrist shot off of a won faceoff by Zach Gallant. The Petes would continue to put the pressure on the Spirit in the final frame.

Danny Katic received a penalty for hooking early on in the third period, making it a Peterborough power play. 51 seconds after the Butler goal, Liam Kirk scored his fifth goal of the season on a tip at the side of the net.

Around midway through the third period, Mason McTavish finished a pretty give-and-go with Liam Kirk with a tip over the left shoulder of Tristan Lennox.

With less than three minutes remaining in regulation, the Toronto Maple Leafs signee Nick Robertson stole the puck from the Spirit defenseman and took a shot that went between the legs of the goaltender Lennox adding another goal for the Petes.

Minnesota Wild prospect Hunter Jones earned his first shutout of the season, and third of his OHL career, stopping a season-low 23 Spirit shots.

The Knights are coming off of a 5-4 overtime loss Friday night to the Owen Sound Attack at Budweiser Gardens in London, Ontario.

London found themselves in a 3-0 hole just 8:44 into the hockey game, resulting in starting goaltender Brett Brochu getting the hook in favor of Vegas Golden Knights Prospect Jordan Kooy.

Kooy shut the door in the second period, and the Knights poured on 29 shots in the middle frame, leading to four second period tallies. The Attack had just five shots in the period, with one finding its way past Kooy to set up a 4-4 tie heading into the third period.

After a scoreless third, Barret Kirwan of the Attack would score in overtime to give Owen Sound the extra point and snapped London’s three-game winning streak.

For the Spirit, they have a total of seven players on their roster with NHL ties, including two that remain with their NHL club or affiliate. Bode Wilde remains on the New York Islanders roster, while goaltender Ivan Prosvetov is currently with Tucson, AHL affiliate of the Arizona Coyotes.