Preview: Spirit travel to Sarnia for first of eight straight against division opponents 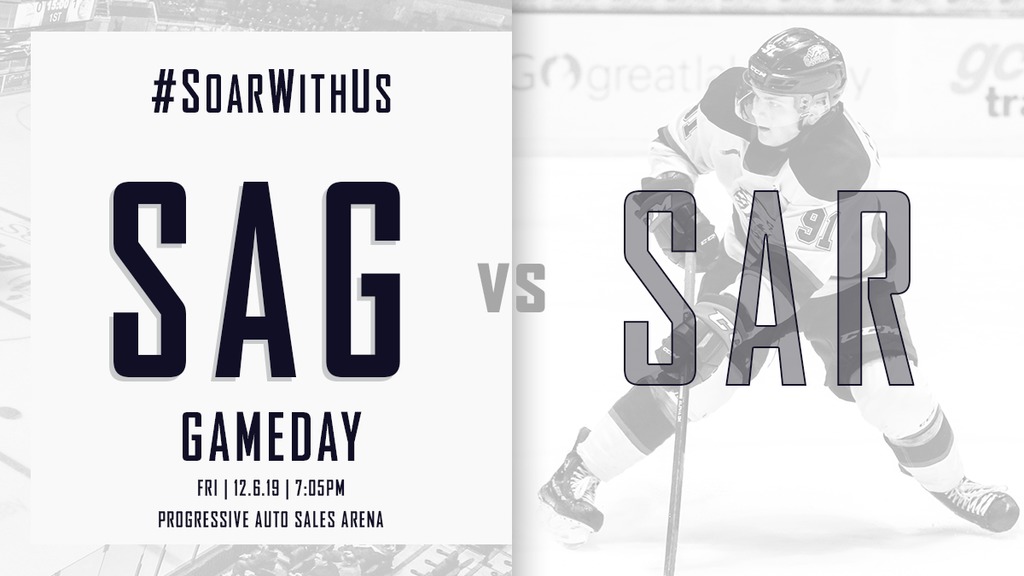 Sarnia, ON. – The Saginaw Spirit face-off against the Sarnia Sting for the second time this season Friday evening. The puck drop is at 7:05 p.m at the Progressive Auto Sales Arena in Sarnia, Ontario. Tonight is the first of eight straight games against West Division opponents and the first of two meetings this month with the Sting. The Spirit will host the Sting on Thurs. Dec. 19 at The Dow Event Center.

Fans can tune into tonight’s game live on 100.5 Newsradio WSGW, www.wsgw.com, and iHeartRadio beginning at 6:50 with radio host James Paxson. The voice of the Spirit, Joey Battaino has the live play-by-play at 7:05 p.m.

The last time these two teams met up, the Spirit pulled ahead with the victory, 9-3. Ilya Solovyov had a Spirit season-high five-point night, including four assists. Rookie Mitchell Smith also found the back of the net for his first goal of the regular OHL season. Captain and Minnesota Wild Draft pick Damien Giroux helped the Spirit by getting two goals. D.J. Busdeker, New York Islanders draft picks Blade Jenkins and Cole Coskey, and Philadelphia Flyers draft pick Mason Millman also added goals to the board.

The Sting found the back of the net three times with goals by Calvin Martin, Colton Kammerer, and Anthony Tabak.

This past Wednesday, the Spirit played the Guelph Storm. The Spirit fell in a shootout loss 3-2 at The Dow Event Center. The Spirit have earned points in three of their last four games.

The Spirit were able to find the back of the net 6:38 into the first period on Grand Blanc, Michigan native Dalton Duhart’s third goal of the season. Overager D.J. Busdeker skated behind the Guelph net and fired a pass through the slot to rookie forward T-Bone Codd to the right of the crease.  Codd quickly sent a backhand pass for the tip-in by Duhart at the top of the Guelph crease to put Saginaw ahead, 1-0.

Guelph tied the game 1-1 with just seven minutes left in the first period on Matthew Papais’ fifth goal of the season.  The Storm rookie hit the Spirit blueline with speed and received a pass from Zach Terry.  Papais had the edge on the Saginaw defender a sniped a wrist shot short side past Spirit netminder Tristan Lennox for the goal.

With just 4:53 left in the opening period, Philadelphia Flyers prospect Mason Millman regained the lead for the Saginaw Spirit.  Duhart cleanly won a Guelph zone face-off back to Millman at the left point.  The Spirit defenseman took a wrist shot through traffic that handcuffed Daws and beat the Storm goaltender over his right shoulder for Millman’s sixth goal of the season.

As Walker exited the penalty box, Saginaw gave the puck away and the Guelph center was hit in stride with a pass from center Cam Hillis.  Walker came down on a breakaway and took a snapshot from the right circle that just got by Lennox’s glove to tie the game Regulation finished in a 2-2 tie and the game went to overtime.

The Spirit’s Danny Katic had a chance to finish the game with just under a minute left in the extra frame on a set-up by Saginaw Spirit leading scorer Cole Perfetti.  Perfetti deked around a Storm defender and center a pass across the Guelph slot to Katic to the right of the crease.  Katic’s one-timer just missed the right post and the game went to a shootout.

After Duhart, Papais, Perfetti, Uba, and Coskey was each failed to convert on their shootout opportunities, Guelph top scorer Pavel Gogolev sped down the ice and snapped a wrist shot that beat Lennox’s blocker to give Guelph the 3-2 victory.

The Sarnia Sting are coming off of a 5-3 loss against the Flint Firebirds on Sunday afternoon.

The Sting got on the board first with a goal by Sam Bitten. Ryan Roth passed the puck to Bitten, who was skating up to the top of the right-wing circle. Bitten shot the puck under Firebirds goaltender Anthony Popovich’s pads to find the back of the net first.

Another goal for the Sting came 5:49 into the second period while on the power play.  Jameson Reed passed the puck from the left-wing circle to Jacob Perreault between the hashes. A one-timer from Perreault put the Sting ahead by two goals.

Dennis Busby took a shot on the Sting goaltender Benjamin Gaudreau, which was rebounded. Connor Roberts collected the rebound and buried the puck for Flint’s first goal of the game.

In front of the blue lines, Vladislav Kolyachonok took a slapshot that made its way to the back of the net which made it a tie game 14:44 into the second.

Emmett Pierce passed the puck to Kolyachonok at the top of the right-wing circle, who then found the back of the net for his second goal of the game and to break the tie 7:55 into the third period.

Jake Durham skated up to the point with the puck, a slapshot from Durham added to the Firebirds lead.

Jacob Perreault earned his second goal of the night with a little over two minutes remaining in regulation. Perreault tipped the puck in from the right corner of the net.

Jack Phibbs extended the Firebirds lead by getting a goal on the Stings empty net.

Sarnia has one player listed in the 2020 NHL Central Scouting ‘Players to Watch’ list in ‘A’ prospect, Jacob Perreault.

The Spirit will be at home on Saturday, December 7 to play the Windsor Spitfires on CAN Council Superhero Night presented by Yeo & Yeo CPA’s. The Spirit will wear special Batman themed jerseys to be auctioned off live after the game. Proceeds benefit the CAN Council and the Saginaw Spirit Charitable Foundation. Puck drop will be at 7:05 p.m. from The Dow Event Center.