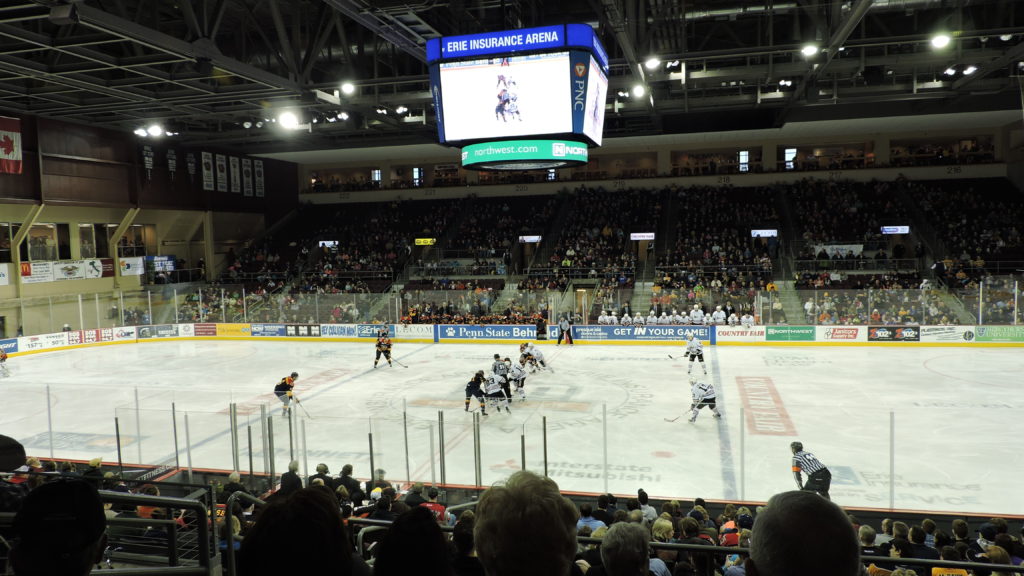 Puck drop at the Erie Insurance Arena is set for 7:00 p.m.   Fans can listen to all the action on FM Talk and Sports 100.5 or fmtalk1005.com with Joey Battaino and Dennis Desrosiers on the call with pre-game beginning at 6:45 p.m.

The Spirit dropped a close game against the Niagara IceDogs in their last game, 6-5 to start the road trip.

Saginaw Spirit leading scorer Cole Coskey lead the team in the loss with a goal and two assists, giving the right-winger 30 points on the season.  Recently the Zion, Illinois native was named to the preliminary 2019 U.S. National Junior Team roster and will be vying for a chance to represent the United States in the 2019 IIHF World Junior Championship.

Saginaw 2017 first round pick Nicholas Porco scored two goals in the 4-3 victory over Erie back on October 6.  Porco, a 2019 NHL Draft prospect, has 10 goals and 18 points thus far this season.

Plymouth, Michigan native Bode Wilde is tied for second on the Spirit with 24 points through just 22 games.  Wilde, who recently signed a three-year entry level contract with the New York Islanders, is currently seventh among OHL defenseman in points.

Saturday’s game in Erie will feature two of the OHL’s top rookies in forward Cole Perfetti and defenseman Jamie Drysdale.

Perfetti, Saginaw’s 2018 first round pick, leads the Spirit with 13 goals on the season.  The Whitby, Ontario native is tied for first among all OHL rookies in goals and fourth in points.

Erie’s first round pick Drysdale leads all rookie defensemen in the OHL with 16 points.  Drysdale was selected fourth overall in the 2018 OHL Priority Draft, one spot ahead of Perfetti with the fifth selection overall.

Petr Cajka, Erie’s first round import draft selection, was recently named the preliminary Czech Republic World Juniors roster.  The center from Kadan, Czech Republic has 12 goals and 21 points on the season, including a goal in the first game against the Spirit this season.

Erie’s leading scorer Kyle Maksimovich is currently 19th in the OHL with 36 points.  The overager has three goals and 10 assists in 17 career games against the Spirit.  The Otters’ captain had two assists in the October 6 loss to Saginaw.

Jackson, Michigan native Blade Jenkins has been very strong throughout his career against the Erie Otters.  The New York Islanders prospect has two goals and seven assists in five games including a two-assist effort in the victory in Erie earlier this season.  Jenkins has been solid on both ends of the ice facing the Otters with a plus/minus of plus-six.

Saginaw returns home Friday, December 14, to host the West Division rival Windsor Spitfires with a 7:05 p.m. puck drop.  The Spirit will look to snap a six-game losing streak against the Spitfires dating back to last season.

To purchase tickets to any Spirit home game call (989) 497-7747, visit saginawspirit.com, or by visiting the Saginaw Spirit Store at 5789 State Street, Saginaw, MI.