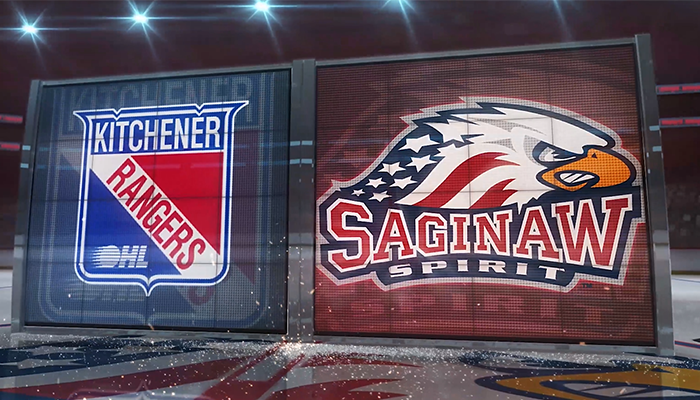 SAGINAW, MI. – The Saginaw Spirit face-off against the Kitchener Rangers for the second time this season Saturday evening. The puck drop is at 7:05 p.m at the Dow Event Center. The Spirit are riding a three-game winning streak after a 9-1 drubbing of the North Bay Battalion on Friday night.

UAW members can get up to eight tickets courtesy of the Garber Automotive Group by showing any type of UAW Identification at the Saginaw Spirit Store on State St. prior to the game or the Will Call desk located inside the atrium at The Dow Event Center.

Fans can tune into tonight’s game live on 100.5 Newsradio WSGW, www.wsgw.com, and iHeartRadio beginning at 6:50 p.m. with the voice of the Spirit, Joey Battaino.

The Spirit’s long homestand will be interrupted with a road test against the London Knights next Friday. Puck drop will be at 7:30 p.m. at the Budweiser Gardens.

New York Islanders prospects Blade Jenkins and Cole Coskey connected to put the Spirit up one goal with only three seconds remaining in the first period. Jenkins took a sharp angle shot at the bottom of the right circle that shot right past Battalion goaltender.

Only 2:04 into the second period, North Bay’s Luke Moncada with a back-handed goal tied the game up 1-1.

4:51 into the second period, Coskey increased the Spirit’s lead to 3-1 with his ninth goal of the season. 2020 NHL Draft top prospect, Cole Perfetti, passed the puck to Coskey for a one-timer from the bottom of the left circle to beat the Battalion goaltender.

2020 NHL Draft prospect Ethan Cardwell scored the fourth Spirit goal. Saginaw Captain Damien Giroux created space on the left-wing and made a great pass to Cardwell open in the slot. Cardwell sent a one-timer passed a sliding North Bay net-minder for his third goal of the season.

6:05 into the third period, Philadelphia Flyers draft pick Mason Millman took a shot from the point that redirected off defensemen Nick Grima’s stick that snuck by the Battalion goaltender, giving Saginaw an 8-1 lead.

At 17:22 of the third period, the Spirit received their second powerplay goal of the game courtesy of Porco. With the assist from Millman and Perfetti, Porco shot an uninterrupted puck at the top of the left circle straight past the Battalion goaltender.

The Rangers are coming off of a 4-3 overtime loss Friday night to the Flint Firebirds at the Kitchener Memorial Auditorium in Kitchener, Ontario.

Kitchener has yet to lose in regulation time at the Kitchener Memorial Auditorium (5-0-1-0), but remains winless on the road this season (0-1-1-2).

The Firebirds received the first goal of the game, but the Rangers answered back about four minutes later to tie the game. Jonathon Yantsis wristed a shot past Firebird goaltender Anthony Popovich.

The Rangers took the lead only 41 seconds into the second period. A slap shot from the blue line was tipped in by Yantsis for his second goal of the game.

Flint tied the game with a powerplay goal by Brennan Othmann at 14:38 of the second period. The Firebirds pulled ahead in the third period, during an odd-man rush in the Rangers zone the puck was tipped in by Even Vierling.

Less than three minutes after the Flint tie-breaking goal, an individual effort from Ville Ottavainen tied the game once again and brought the game into overtime.

At 2:08 in the overtime period, Florida Panthers prospect Vladislav Kolyachonok scored to give the Firebirds the victory, 4-3.