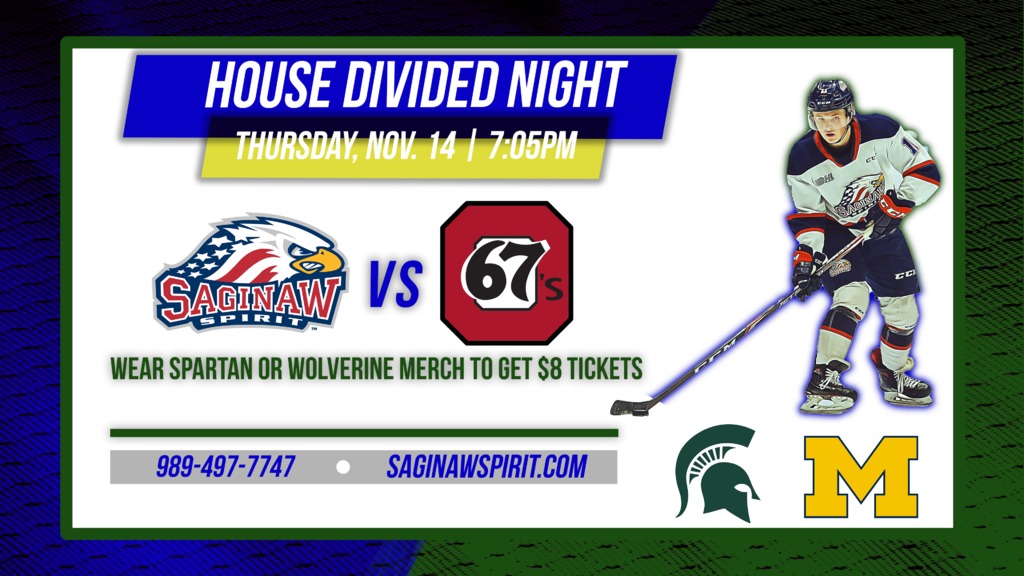 Walk up tickets for the game are $8 when you wear University of Michigan or Michigan State University gear to the game.  The Spirit are selling $6 Student and Military Rush tickets for Thursday’s game against the 67’s.

The Spirit dropped both games last season against the eventual Eastern Conference Champion Ottawa 67’s, including an 8-2 decision last November at The Dow.

The Spirit orchestrated a comeback overtime victory, 7-6  on the road Sunday evening against the West Division rival Windsor Spitfires.  Saginaw has won two straight games and have points in the last four games.

Saginaw scored three goals in the final 1:20 of regulation on Sunday to send the game into overtime.  Saginaw Spirit captain Damien Giroux capped off the late third period comeback with his team leading 14th goal with just two seconds left in regulation.

Giroux, a fifth-round pick of the Minnesota Wild, is tied for sixth in the Ontario Hockey League in goals.

New York Islanders prospect Cole Coskey passed Spirit alum Eric Locke for 7th all-time in team-history with 84 career goals as a Saginaw Spirit.  The Zion, Illinois native is second on the Spirit in both goals (12) and points (26) this season.

Jackson, Michigan native Blade Jenkins was given third star honors in the overtime victory over the Spitfires.  The New York Islanders draft pick sparked the third period comeback with a goal 1:20 left in regulation, as well as three assists in the game.

Thursday’s game features two of the top prospects in the upcoming 2020 NHL Draft in Montreal, Quebec in June.

Saginaw’s Cole Perfetti and Ottawa’s Marco Rossi each received an ‘A’ rating in the 2020 NHL Central Scouting ‘Players to Watch’ list.

Whitby, Ontario native Perfetti contributed a goal and two assists in the game against Windsor.  The Saginaw forward is sixth in the OHL this season with 32 points in just 19 games this season.

Rossi, the 2018 Ottawa 67’s Import Draft first round pick, is tied with Austen Keating and Noel Hoefenmayer for the team-lead at 27 points this season.  The Feldkirch, Austria native scored 29 goals and 36 assists for 65 points in his rookie OHL season last year.

Hoefenmayer, an Arizona Coyotes prospect, is first among OHL defenseman with 27 points in 18 games this season.  The Ottawa defenseman has provided points in the last three games for the 67’s.

Overager Austen Keating finished last season fourth in the OHL with 67 assists in just 68 games.  Keating had a goal and assist in the two games last season against the Spirit.