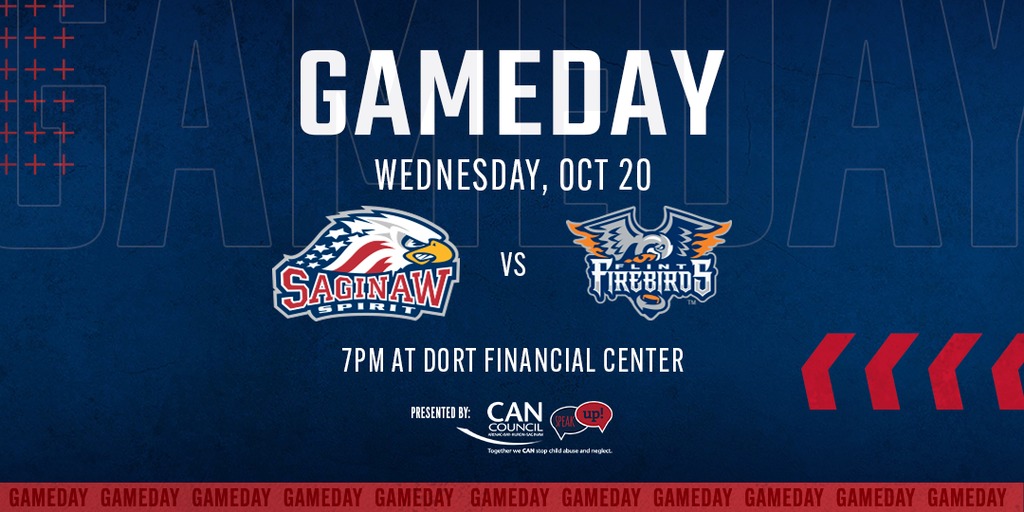 Flint, MI – The Saginaw Spirit hit the road for the first time this season, beginning a three-game, road-swing in Flint on Wednesday with their first of 12 meetings this season with their in-state rival, Flint Firebirds.

The Spirit opened the 2021-22 regular season on Saturday night before 5,278 fans at The Dow Event Center with a 4-2 defeat at the hands of the Erie Otters. Defensemen Roberto Mancini and Mitchell Smith opened the scoring for Saginaw in the first period, jetting the Spirit into a 2-0 lead. The following 40 minutes proved difficult for the home team, as the Otters scored four unanswered goals to take a 4-2 decision.

With revenge on their mind, the Spirit set out Sunday for a series split with the Otters. This time it was Erie who scored first, courtesy of a Brett Bressette power play goal. Just one minute later, Calem Mangone responded for the Spirit and just 1:24 after that, T-Bone Codd put Saginaw in the lead for good with a hard cut toward the front of the goal and a backhand shot that went between the legs of the Erie goaltender. New York Islanders prospect Tristan Lennox earned first star honors with a multitude of ten-bell stops throughout the contest.

Flint comes into tonight’s matchup winners of their first two contests against the Erie Otters at The Dort Financial Center in Flint, MI.

A Firebirds third period comeback was capped off by a tremendous individual effort by Zacharie Giroux to put Flint in the lead with just 1:00 remaining. Behind 37 saves from Luke Cavallin, the Birds hung on for their second win of the season.

Tonight, marks the first game of the Coors Light I-75 Divide Cup Rivalry Series. The Spirit have won the cup the last three season with a combined record of 18-3-1 over that stretch, and have earned at least a point in 13 straight regular season contests at Dort Financial Center (11-0-2-0).

The Spirit are proud to partner with Buffalo Wild Wings of Saginaw at 2690 Tittabawassee Road to be the official watch party hosts of Saginaw Spirit road games. Tonight’s radio broadcast on 100.5 WSGW-FM begins with ‘Countdown to Face-off’ pregame show at 6:45 p.m. with puck drop scheduled for 7:00 p.m. Fans can also stream tonight’s game at watch.chl.ca beginning at 7:00 p.m.