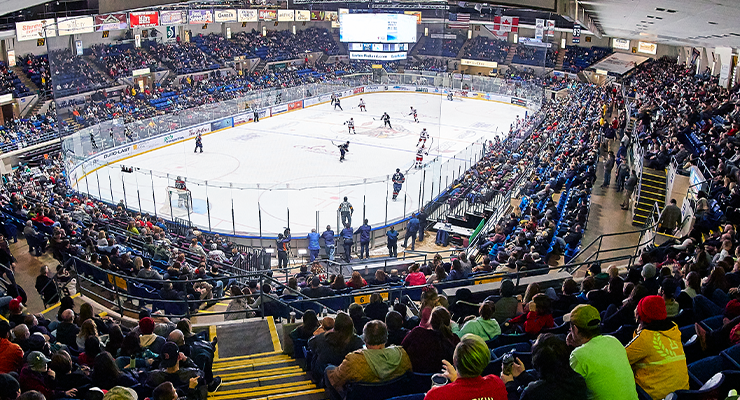 The Spirit will be having a $5 student/military ticket rush for the game presented by Reder Landscaping.

Fans can watch live on OHLlive.com or listen to the game on the flagship WSGW 100.5 FM Talk and Sports or fmtalk1005.com with Joey Battaino and Dennis Desrosiers on the call.  Pre-game coverage begins 15 minutes before puck drop with host Domenic Papa.

In the last 10 games, Saginaw has collected 19 of a possible 20 points and come into Wednesday’s game riding a six-game win streak.  The Spirit have a plus-20 goal differential in the last six-games.

Since taking over as Spirit head coach, Chris Lazary has led Saginaw to a 13-2-1-1 record.  The Spirit are now third in the Western Conference and just one-point behind Sault Ste. Marie in the West Division race.

A big factor in the streak has been the play of Saginaw’s goaltenders Ivan Prosvetov and rookie Tristan Lennox.  The two have combined for a goals against average of 1.80 in the past 10 games.

Prosvetov, a Arizona Coyotes prospect, was named Vaughn CHL goaltender of the week after posting a 3-0-0-0 record with a goals against average of 1.00 and a save percentage of .969.  The Russian goaltender is coming off his best performance as a Spirit in a 2-0 shutout win against the Sudbury Wolves.  Prosvetov stopped all 54 shots faced against the Wolves en route to his eighth straight victory.  The 19-year-old now leads the OHL with three shutouts on the season.

Edmonton Oilers second round pick Ryan McLeod has been strong against the Hamilton Bulldogs this season.  McLeod, recently acquired from the Mississauga Steelheads, had a goal and four assists in three games this season.

Newest Saginaw Spirit Owen Tippet had two assists for the Steelheads against Hamilton earlier this season.  Tippett signed with the Florida Panthers after the team drafted the right-winger 10th overall in the 2017 NHL Draft.  The Peterborough, Ontario native has 20 goals and 15 assists in just 25 games this season.

The Spirit defense will attempt to contain CHL Player of the Week Arthur Kaliyev.  The 2019 NHL Draft top prospect scored seven goals and four assists in his last four games.  The Stanton Island, New York native leads Hamilton with 31 goals and 32 assists.  Kaliyev is currently fourth among all OHL players with 63 points in just 40 games.

Philadelphia Flyers prospect Matthew Strome is coming off three-point game against the Niagara IceDogs.  The Hamilton left-winger scored two-goals was good for second-star honors in the 6-5 shootout loss to Niagara.  Strome is the youngest brother of the NHLers Dylan and Ryan Strome.  The Mississauga, Ontario native is second on the Bulldogs with 46 points.

Hamilton recently acquired Arizona Coyotes prospect Jan Jenik from the Flint Firebirds.  Jenik was selected in the third round in the 2018 NHL Draft after having a big 2018 Hlinka Memorial Cup Tournament.  The six-foot-one-inch forward scored six goals and seven points in five games with Team Czech Republic.