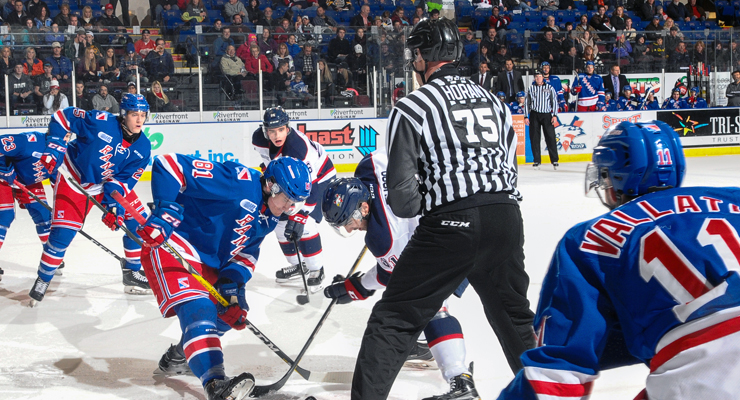 On Wednesday night, Saginaw ventured to the Soo for a matchup with their West Division-rival Greyhounds, a game in which the Spirit let in five consecutive goals en route to a 6-3 loss. Despite the final score, the Spirit posted a couple notable performances as left winger Damien Giroux registered two goals and right winger Ryan Stepien logged his first career OHL goal. The Spirit also outshot Sault Ste. Marie by a 41-35 margin.

Adding familiarity to tonight’s contest, Saginaw and Kitchener both share their most recent common opponent in the Soo Greyhounds. The Rangers traveled to the Greyhounds’ rink last night, and the home team dispatched the visiting Rangers, 3-2. Kitchener goaltender Anthony Dumont-Bouchard earned 3rd star honors after stopping 22 of 25 shots in the matchup. On the offensive side, Philadelphia Flyers prospect Connor Bunnaman and Greg Meireles provided goals to bolster the Kitchener scoresheet. Prior to yesterday’s loss, Kitchener turned in a 2-1-0-0 record in its last three contests with wins against the Owen Sound Attack and Erie Otters, while losing to their main rival, Guelph Storm.

Entering tonight’s game versus Kitchener, Saginaw will take the ice without two of its top playmakers as Nicholas Porco (slew foot) and Max Grondin (instigator in final five minutes) are both serving the first leg of their two-game suspensions.

Tonight is the 61st all-time regular season meeting between the Spirit and the Rangers with Saginaw posting a 21-31-7-1 mark in the previous 60 games. The Spirit are 14-12-3-0 at The Dow Event Center all-time against the Rangers but are winless in their last eight meetings overall. The Spirit will try to change that tonight as first year bench boss Troy Smith faces off against the team that gave him his first coaching job 11 years ago.

Smith spent seven years as an assistant coach for the Rangers before being promoted to head coach prior to the 2013-14 season. Smith’s record in two seasons as head coach of a rebuilding Rangers squad was 54-67-5-10, with a playoff appearance in the 2014-15 season.