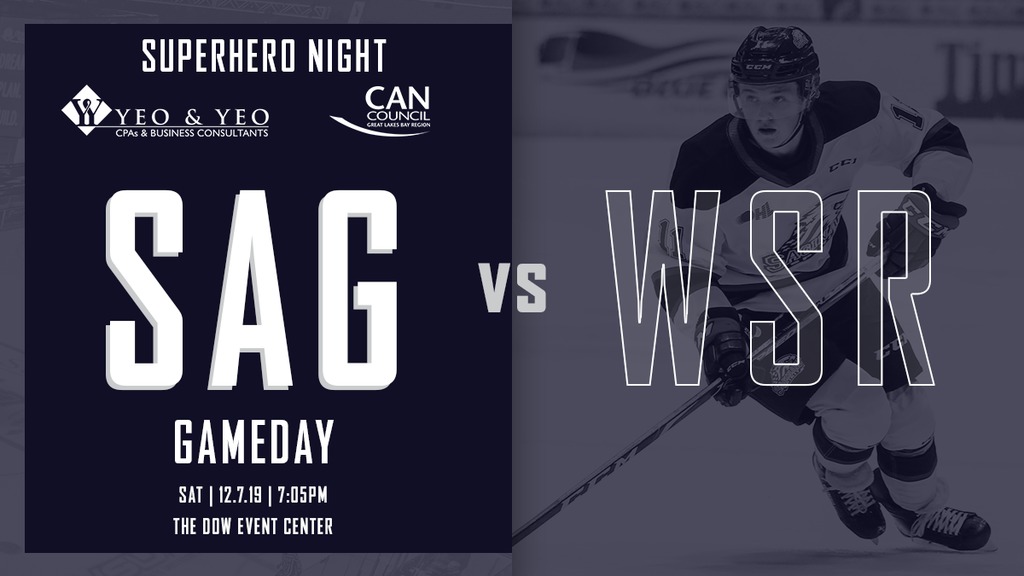 Saginaw, MI. – West Division powers collide in Saginaw, Michigan Saturday, December 7, when the Saginaw Spirit (15-9-2-2 34 pts.) host the rival Windsor Spitfires for the fourth annual Super Hero Night at The Dow Event Center presented by CAN Council and Yeo & Yeo CPA’s and Business Consultants.  Puck drop for the third of eight regular season meetings, and the first of back-to-back meetings, begins at 7:05 p.m.

The Spirit superhero themed jerseys will be auctioned off at the conclusion of the game versus the Spitfires with the proceeds donated to the CAN Council.  The CAN Council’s efforts and services aid the prevention of child abuse and neglect in the Great Lakes Bay Region.

Saginaw and Windsor have split the season series thus far with each team victorious away from home.  The Spirit were powered by a three-goal surge with just 1:20 left in regulation to force overtime in the 7-6 victory back on November 10 in Windsor, Ontario.  The Spitfires defeated the Spirit 4-1 at The Dow back on November 23.

Special teams will be of the upmost importance in the contest with Windsor’s top-ranked power play going up against Saginaw’s fifth-ranked shorthanded unit.  The Spitfires have converted at an astounding 31.2% clip on their power plays, where the Spirit have killed 80.9% of the man-power disadvantages this season.

The Saginaw Spirit set a team record with 11 goals in Friday evening’s 11-8 triumph over the West Division rival Sarnia Sting on the road.

Nine different Saginaw Spirit players found the back of the net in the victory.  Top 2020 NHL Draft prospect Cole Perfetti and captain Damien Giroux both lit-the-lamp twice in the game against the Sting.

The Whitby, Ontario native Perfetti leads the Spirit in both assists (30) and points (45) in just 28 games played this season.  The Saginaw forward has points in nine of the last 10 games with 15 points during the stretch.  Perfetti was named to the Canada National Junior Team selection camp earlier this week, with those chosen to compete in the 2020 IIHF World Junior Championship.

Giroux, a 2018 fifth round pick of the Minnesota Wild, leads all Spirit players with 18 goals this season.  The Hanmer, Ontario native had a plus/minus rating of plus-four in the victory over the Sting.

New York Islanders prospect Cole Coskey had a four-point game against Sarnia, which was good for the game’s second-star honor.  The Saginaw right-winger passed Saginaw Spirit alum Eric Locke for sole possession of eighth in team-history with 104 career assists.

Rookie forward Sebastion Bulovs collected his first career Ontario Hockey League (OHL) goal against the Sarnia Sting Friday night.  The Brampton, Ontario native Bulovs was selected by the Saginaw Spirit in the fourth round of the 2018 OHL Priority Selection Draft.

Recently acquired Danil Antropov has points in three of the four games he has played for the Saginaw Spirit.  The North York, Ontario native Antropov was picked up via trade with the Oshawa Generals November 28.

Windsor is just 1-3-0-0 since the November 23 victory over the Spirit at The Dow.  The Spitfires are coming off a 4-3 defeat to the Kitchener Rangers Thursday night at home.

2020 NHL Draft prospects Will Cuylle and Jean-Luc Foudy both tallied a goal in the loss to Kitchener.

Cuylle, a former Peterborough Petes third-overall pick, has eight goals and nine assists for 17 points this season for the Spitfires.

2018 Windsor Spitfires first round pick Foudy has 23 points for Windsor in his 24 games played this season.  The Scarborough, Ontario native led the Spitfires last season with 41 assists.

Columbus Blue Jackets prospect Tyler Angle leads the Spitfires in goals (14) and points (29) this season.  In two games against the Spirit this season, Angle has a goal and three assists for four points.

Defenseman Louka Henault leads all Windsor players this season with 18 assists from the backend.  The Montreal, Quebec native is just three points away from eclipsing his career-high 22 points last season for the Spitfires.

Dallas Stars draft choice Curtis Douglas has been strong in the two games this season against the Saginaw Spirit.  The Windsor center has two goals and two assists for four points in the two matchups this year.

The Windsor Spitfires have a total of five players on the ‘Players to Watch’ list for November. Jean-Luc Foudy and Will Cuylle are both ‘A’ prospects, while Kyle McDonald and defesemen Ruben Rafkin and Dylan Robinson are ‘C’ prospects.