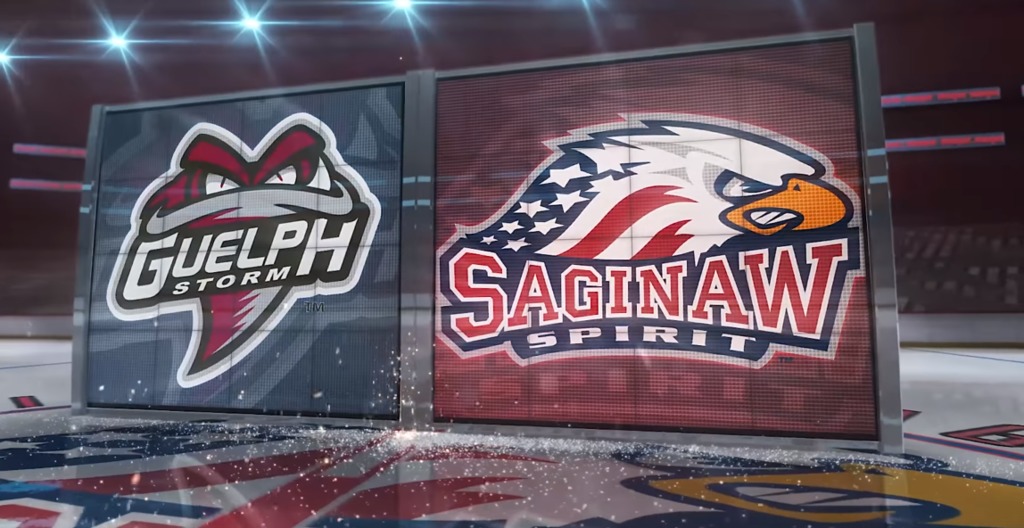 Guelph, ON. – The Saginaw Spirit face-off against the Guelph Storm for the third time this season Friday evening. The puck drop is at 7:30 p.m at the Sleeman Centre in Guelph, Ontario.

Fans can tune into tonight’s game live on 100.5 Newsradio WSGW, www.wsgw.com, and iHeartRadio beginning at 7:15 with radio host James Paxson.

Don’t forget to catch tonight’s game on “Saginaw Spirit Rewind” Sunday night 6-10 p.m. on WNEM TV 5+ (Antenna: 5.2, Spectrum 199, Xfinity (Flint) 4). At 6 p.m., the Spirit dominate their rival Flint Firebirds to even the Coors Light I-75 Divide Series. At 8 p.m., the Spirit face the Guelph Storm in their second meeting of the season.

The North York, Ontario native was a first round pick (6th overall) back in the 2016 OHL Priority Selection Draft by the Generals. The 6-foot-1, 186-pound left-winger has six goals and seven assists in 23 games this season, but is coming off of a career season in 2018-19. Antropov had 15 goals and 37 assists in 66 games last year.

This past Wednesday, the Spirit played the Flint Firebirds for the second time this season. The Spirit came out on top 8-3 at The Dort Federal Event Center.

Grand Blanc, Michigan native Dalton Duhart opened the scoring 5:28 into the first period with his second goal of the season.  Duhart was given a pass on the boards and came down on a breakaway.  The Spirit forward sniped a wrist shot over Flint goaltender Anthony Popovich’s left shoulder for the goal.

After two Flint goals gave them the lead, Philadelphia Flyers prospect Mason Millman sent a pass over to Giroux at the top of the right face-off circle.  The Minnesota Wild prospect patiently waited for a screen in front of the net and sent a wrist shot that beat Popovich blocker side to tie the game at two.

2019 Saginaw Spirit second round pick Josh Bloom dropped a pass in the slot to Ilya Solovyov in the Flint slot.  Popovich over committed to the right and Solovyov snapped a shot into the open left side of the net for the 3-2 lead.

Danny Katic centered the puck to Goldowski at the top of the Firebirds slot and the Thornhurst, Pennsylvania native sniped a wrist shot top shelf 5:20 into the second period.

Flint cut into the Spirit lead 13:35 into the second period on Flint left-winger Emmet Pierce’s first goal of the season.

As Dexter, Michigan native D.J. Busdeker skated around the Flint net, he lost control of the puck into the Firebirds slot.  Perfetti collected the puck and snuck a shot into the short side in between Cavallin and the left post for the 6-3 lead.

After New York Islanders prospect Blade Jenkins and Perfetti forechecked on the penalty kill the goaltender Cavallin did not cover the puck.  Perfetti took the puck away from the Flint defender and hammered the puck past Cavallin.

Cardwell extended the Saginaw lead to five goals with 3:25 left in regulation for his seventh of the season.  Perfetti centered the puck to just outside of the Flint crease, where Cardwell redirected the puck into the Flint net out of mid-air for the eventual 8-3 victory.

The Guelph Storm are coming off of a 3-1 win against the Mississauga Steelheads on Wednesday morning.

The scoring began in the second period with a goal from the Storm’s Matthew Papais. Skating up to the right side of the goal, Papais tipped the puck in past Steelheads goaltender Kai Edmonds.

On the power play, the Storm found the back of the net again to increase their lead early in the third period. From the top of the circles, Daniil Chayka took a slap shot that went top-shelf past the goaltender.

The Steelheads got their first goal of the game at 12:50 of the third period. A loose puck in front of the net was collected by Richard Whittaker who then buried the puck deep to make it a one-goal game.

Eric Uba skated up to the top of the right-wing circle and took a shot on the empty net to bring the score to 3-1.

The Storm hosted the Spirit on Saturday, November 16. The Storm came out on top, 2-1.

Ilya Solovyov found the back of the net first in the second period while on the power play.

Guelph has earned at least one point in the last 12 consecutive games (11-0-0-1). Their 10-game winning streak was snapped with a shootout loss in Hamilton on November 23.

The Spirit will be on the road again Saturday, November 30 to play the Owen Sound Attack. Puck drop will be at 7:30 p.m. from the Harry Lumley Bayshore Community Centre. 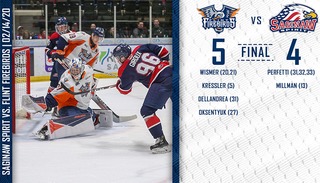 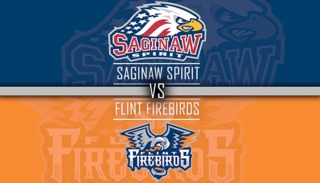 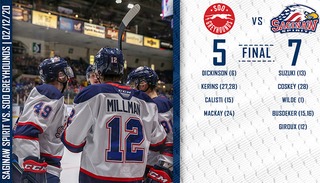