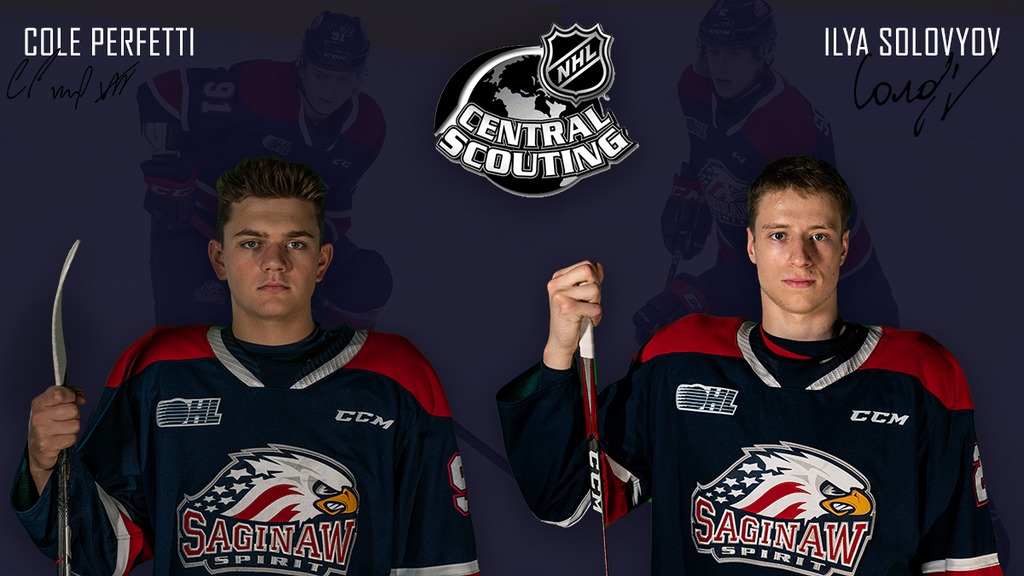 The National Hockey League’s Central Scouting Department released their Midterm Rankings for the 2020 NHL Entry Draft to be held in Montreal, Quebec on Monday morning.

Of the 220 players ranked, two Saginaw Spirit players were featured on the list.

Cole Perfetti, 18, is listed as the fourth best overall North American skater heading into the 2020 NHL Draft. In 40 games this season, Perfetti leads the Spirit with 23 goals and 46 assists. His 69 points is good for third in the entire Ontario Hockey League in scoring.

The Whitby, Ontario native is in the midst of a career-high, 11-game point streak. In those 11 games, Perfetti has seven goals and 16 assists for 23 points, including eight multi-point games, and a career-high, five-point game on Jan. 4 against Oshawa.

Ilya Solovyov, 20, is ranked No. 119 among North American skaters, which is a fourth round pick in the 2020 NHL Draft. Solovyov is in his first year in the Ontario Hockey League after being selected by the Saginaw Spirit in the first round, 53rd overall, in the 2019 CHL Import Draft.

The 6-foot-3, 210-pound, rearguard leads the Spirit in defensive scoring with three goals and 26 assists this season. Solovyov took home Bronze for his native Belarus at the 2020 World Junior Championship Division 1 – Group A, where he was named Best Defenseman in the tournament.