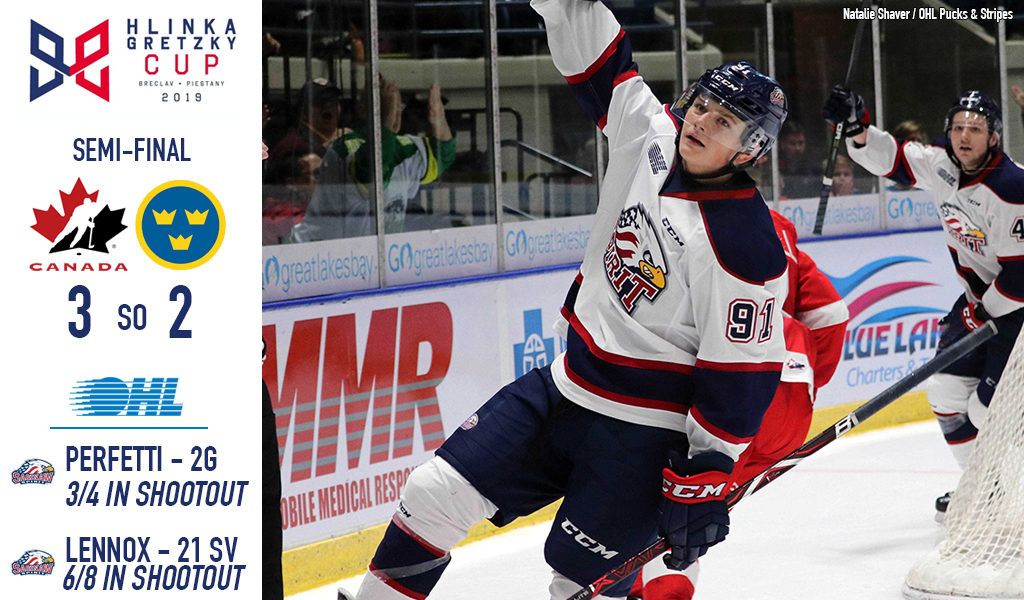 Breclav, Czech Rep. – ‘Goal Perfetti’ and ‘Perfecti’, both monikers Saginaw Spirit standout Cole Perfetti has earned himself on his tour of duty with Hockey Canada in the 2019 Hlinka Gretzky Cup.

The sharpshooter from Saginaw demonstrated why he’s already on the radar as one of the top prospects eligible for the 2020 NHL Draft on Friday, scoring twice in regulation and three times in the shootout as Canada edged Sweden 3-2 in Semi-Final action to advance to Saturday’s gold medal final.

Tied at two after 70 minutes of action, Canada and Sweden squared off in an eight round shootout as Perfetti accounted for all three of his team’s goals while teammate Tristan Lennox stopped Daniel Ljungman to keep Canada’s golden hopes alive.

Ljungman opened the scoring for Sweden on the power play nearing the midway point of the first period before Perfetti netted a breakaway goal 35 seconds into the second. Hugo Styf reinstated Sweden’s one-goal lead less than three minutes later. Perfetti knotted things at two with 5:42 remaining in the second and the score would stay that way throughout the third period and a 10-minute overtime frame that solved nothing.

Canada outshot Sweden 41-23 as netminder Jesper Wallstedt kept his club alive and got them to within one shot of advancing to play for gold. Lennox was equally solid, making 21 saves at his end before going 6-for-8 in the shootout.

Perfetti, who set a Spirit franchise record for rookies with 37 goals this past season, has now scored in all four of Canada’s contests, collecting a tournament-leading seven goals along with nine points.

Video: Perfetti on shootout: ‘I stuck with what I know works, and tried to keep as calm as possible’

Lennox on Perfetti: ‘He’s a freak of nature’