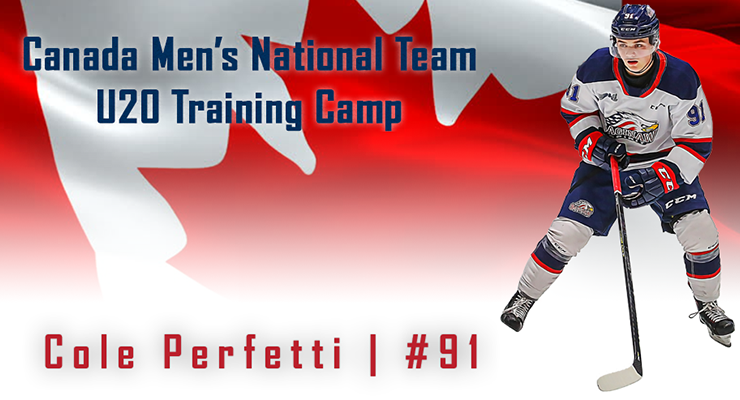 CALGARY, Alta. – With less than one month until the puck drops on the 2020 IIHF World Junior Championship, Hockey Canada has named the 31 players, including Saginaw Spirit 17-year old leading-scorer Cole Perfetti, who have earned an invitation to Canada’s National Junior Team Sport Chek Selection Camp, set for Dec. 9-12 in Oakville, Ont.

“We are extremely proud of Cole Perfetti in his selection for Team Canada’s National Selection Camp,” said Spirit General Manager Dave Drinkill. “Just last winter, Cole was representing his country in the Under-17 World Hockey Challenge. His growth over that period of time has been exciting for our organization and fan base to watch. Being one of just three underage players in the entire country selected shows how special of a player Cole is. We wish Cole the best of luck during his time with Team Canada.”

The players, including four goaltenders, 10 defencemen and 17 forwards, will compete for a chance to represent Canada at the 2020 IIHF World Junior Championship in Ostrava and Trinec, Czech Republic, Dec. 26-Jan. 5.

“After a long evaluation process through summer camp, the early weeks of the CHL season and the Canada-Russia Series, we are nearing the final steps in selecting the roster that will represent Canada at the 2020 IIHF World Junior Championship,” said McEwen. “We are expecting a highly competitive camp from these 31 players, and we know there will be many difficult decisions when it comes time to select the players who will wear the Maple Leaf in the Czech Republic.”

For more information on Hockey Canada, Canada’s National Junior Team and the 2020 IIHF World Junior Championship, please visit HockeyCanada.ca, or follow along through social media on Facebook, Twitter and #WorldJuniors.