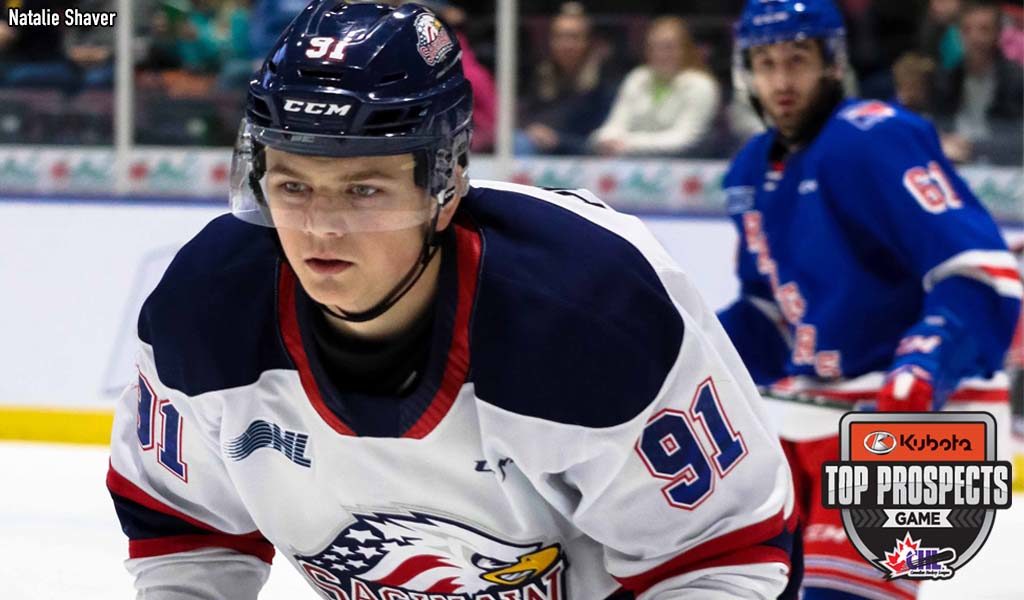 Cole Perfetti is doing some special things with the Saginaw Spirit.

He sits atop the team’s scoring list with 23 goals and 49 assists for 39 points, placing him third among all OHL skaters.

He’s helped them to second in the West Division, only one point back of the conference-leading Windsor Spitfires, on a ride that has seen them claim eight of their last 10 games. This after setting a franchise record with 37 goals as a rookie in 2018-19.

And now, he has the chance to become the first ever top 10 pick to come out of the club.

But first, alongside 16 other NHL draft hopefuls coming out of the OHL, he’s going to try to impress at this week’s Kubota CHL/NHL Top Prospects Game in Hamilton. It’s a feat, and a challenge, he’s looking forward to.

“There’s a lot going on in this game and it’s going to be a lot of fun,” he said, following practice with Team White ahead of Thursday’s game. “Obviously they’re all great players and that’s the reason they’re here but everyone wants to show what they have and show their game. There are going to be a lot of eyes on this game, so it’s about being able to show yourself, prove you can play at a high level, and prove to the scouts they should draft you in June.”

The 17-year-old left winger was recently ranked fourth among North American skaters in NHL Central Scouting’s Midterm Rankings. It’s a recognition for which he feels grateful.

“There are tons of great players worldwide, and especially in North America, and to be able to be rated number four is humbling,” said Perfetti of the title, who recognizes it’s an honour that he has to work to maintain ahead of the big day in June.

“It’s a true testament to all the hard work but it’s a long road ahead,” he continued. “I kind of just have to put that in the back here, drive my team, and hopefully make a long run with Saginaw.”

Speaking of Saginaw, when asked about how special a moment it would be for him to hear his name called in that top 10 list as a Spirit skater, Perfetti acknowledged its prestige.

“[Saginaw] is becoming more of a top program and a destination spot for top end people to come so it’s pretty cool to be one of the first guys in Saginaw to be in talks of becoming a top 10 pick,” Perfetti said of the prospective accolade.

“You never know until the actual day, but there are a lot of good names in the Saginaw history and to be one of the first ones in contention for that talk is pretty cool. It’s an honour.”

.@ColePerfetti91‘s eyes light up on rebounds like this one ?

2020 #NHLDraft prospect brings down the bears at the Dow, scoring one of his 2️⃣? on the night as @SpiritHockey took a second straight win over Flint. pic.twitter.com/l8PO7kDZ7r

Of course, with all those accolades has been adversity. Perfetti was cut from Team Canada’s World Junior roster in December, but it’s an experience he’s chosen to use as motivation.

“I think it’s better to get cut now then down the road in a couple years,” he said of the disappointment. “I’m only 17 and it’s not a 17-year-old tournament so I think getting that experience of what it’s like to get cut, of something you never want to feel again, it’s going to definitely drive me for next year and for the rest of this year.”

When asked about his performance through the first 40 games of his season, the Whitby native had all positives to share, and not for nothing.

“We made a couple trades and we’re sitting high up in the Western Conference right now. It’s a tight race to the finals, but we’re playing real well, and we’re playing strong.”

“It’s pretty easy to play with elite players like him,” said Perfetti of his new teammate. “His elite hockey sense just came in and we clicked pretty quickly. I’m looking forward to playing the rest of the year with him.”

Suzuki was one of 15 OHLers present at last year’s Top Prospects game in Red Deer. While both players have the chance to share the remaining season’s journey together, Perfetti pointed out that there’s a lot he can learn from the 18-year-old former Barrie Colt.

In fact, he said he turned to Suzuki for advice ahead of his trip to Hamilton, in terms of what to expect.

“He said it’s obviously a good stepping stone along the journey. He said it’s a big deal being named to it,” Perfetti explained.

“But it’s not the end of the world if you don’t play great or make an impact right away. Just being named to the team is a big deal in of itself and he said there are going to be a lot of eyes on you there and it’s going to be fun so just go play your game and make a name for yourself.”

Among such a talented draft class of OHL skaters taking to the ice for the 2020 Top Prospect game, the Spirit winger also expressed excitement in getting to play with some of the other guys experiencing the same ride.

He pointed out a few in particular.

✌️ in a row for none other than @ColePerfetti91.

The 2020 #NHLDraft prospect led the @SpiritHockey to a hard-fought 5-4 victory on home ice. pic.twitter.com/Kyv3JFTdC9

“It’s always fun to play with Q,” he said of the opportunity to face off against the Sudbury Wolves’ Quinton Byfield. “And Jamie, the way he skates is electrifying and the way he sees the ice is pretty special so playing with him is going to be fun,” he continued.

He mentioned playing alongside guys he grew up playing minor hockey with, like Barrie’s Tyson Foerster and Ryan O’Rourke of the Soo Greyhounds.

“I haven’t seen in awhile or played with some of these guys in awhile. It’s cool to actually be teammates for once.”

Perfetti’s OHL road to get to this point has been a good one, and for that, he credited the Saginaw system.

“The owners there and the management are top notch,” he said. “They’ve been building a good program up until this point and it’s finally paying off. We’re getting great players wanting to come to Saginaw and we’re developing them.”

And heading into draft day in June, he hopes to find success with that system up until the very end.

“We’re going to make another push like we did last year, hopefully get over the hump and win this year. It’s been a lot of fun and there’s going to be a lot of excitement to come.”

Catch Perfetti and 16 other highly skilled OHL draft eligibles Thursday night at 7:00pm ET on Sportsnet and NHL Network when the puck drops on the 2020 Kubota CHL/NHL Top Prospects Game.