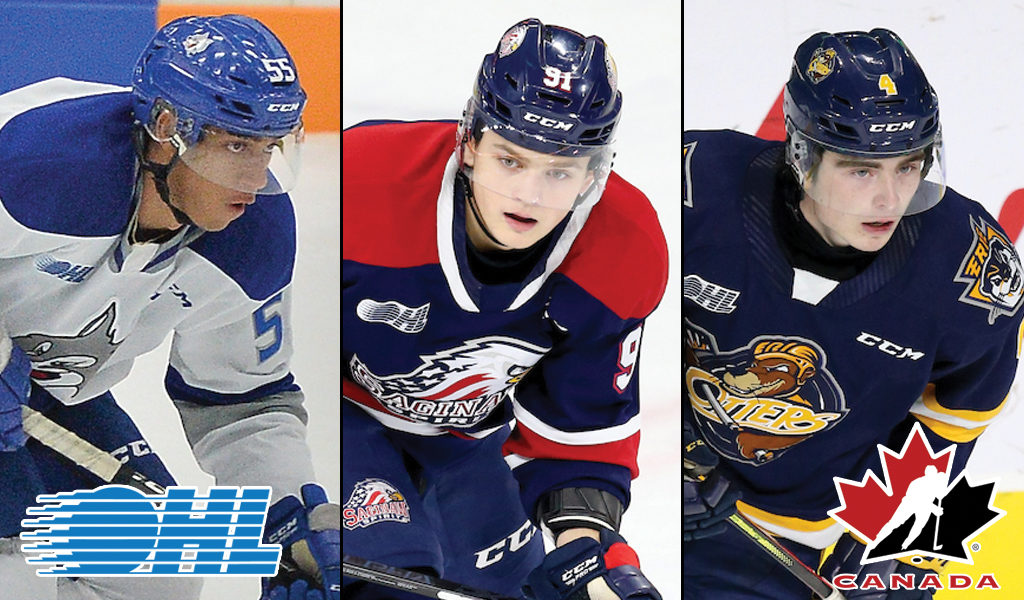 While there is plenty of experienced talent aiming for spot with Team Canada at this year’s World Juniors, much of the spotlight shines on those earmarked for selection in the coming NHL Draft.

Among the seven first-time draft eligibles is a trio of 17 year olds in Sudbury Wolves centre Quinton Byfield, Erie Otters defenceman Jamie Drysdale, and Saginaw Spirit forward Cole Perfetti, all of whom have put together impressive performances this season and in past evaluations in helping them earn an invite as camp opened Monday.

“When we looked at the process and did our evaluations, we felt strongly that they were (among) the best players irrelevant of age,” said Hockey Canada head scout Brad McEwen. “They have been good, productive players through our Program of Excellence, plus you look and what they have done with their club teams, especially this first half, and their resumes are really, really good.”

Beginning with Byfield, who projects as a top-two selection in the coming NHL Draft in Montreal, the hulking pivot has been a dominant force with the Wolves this season as the reigning CHL Rookie of the Year hasn’t missed in beat in collecting 57 points counting 22 goals and 35 assists through 30 appearances to sit second in the OHL scoring race.

“Quinton is a big body that possesses the puck. He works and gets to the areas he needs to be in order to be successful,” McEwen provided. “He brings some real qualities with the overall package of skill that we believe gives us an opportunity and some options.”

Joining Byfield up front is another scoring machine in Perfetti, who after leading all OHL rookies in both goals and points last season continued to shine in the summer with jaw-dropping heroics at the 2019 Hlinka Gretzky Cup where he scored five times in one game including three shootout markers to push the Great White North past Sweden in semifinal action. That dominance has continued over to this season as through 29 games the Spirit forward has recorded 15 goals and 30 assists for 45 points.

“Perfetti is highly skilled with tremendous hockey sense. He is a guy who we believe you can move around the lineup and he produces offense,” McEwen offered. “You go back to the Program of Excellence experiences, and he has been very productive for us. You look at the shootout in the Hlinka Gretzky Cup this summer and he showed great poise and calm to do good things there.”

Rounding out the fresh faces is Drysdale as the Otters blue liner brings a solid mix of defensive prowess and strong offensive instincts to the back end. His scoring touch was surely evident earlier this season when he notched five points in a single game to tie an Otters’ franchise record. In all, Drysdale has registered 31 points on the season counting six goals and 25 assists in 29 contests to sit tied for third in scoring among all OHL rearguards.

“Drysdale’s game keeps evolving. It’s the same where he continues to go through the Program of Excellence and be an impactful player at the OHL level in Erie,” McEwen added. “When we look at our defence and the grouping and how the coaches see it, he brings a lot of qualities we believe we need to be successful. The process of camp will determine where he fits – if he fits – but he certainly brings a lot of the qualities that we look for.”

Byfield, Perfetti, and Drysdale are among 27 CHL players who will compete for a spot at Hockey Canada’s camp held in Oakville, Ont., this week. Tournament action then begins on Dec. 26 from Czech Republic as Canada will face off against the United States in what it hopes is the first step toward its 18th gold medal in the annual classic.

For more information on Hockey Canada, Canada’s National Junior Team and the 2020 IIHF World Junior Championship, please visit HockeyCanada.ca, or follow along through social media on Facebook, Twitter and #WorldJuniors.