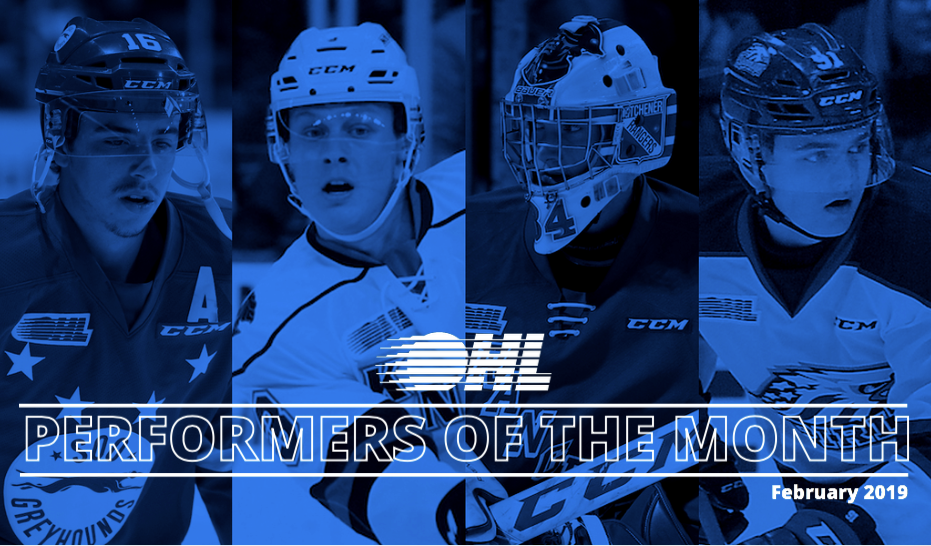 OHL Player of the Month – Morgan Frost (Sault Ste. Marie Greyhounds):
Philadelphia Flyers prospect Morgan Frost of the Sault Ste. Marie Greyhounds is the OHL Player of the Month for February, leading the league with 25 points including six goals and 19 assists over 12 games to go with a plus/minus rating of plus-7. Frost climbed into the OHL scoring lead, becoming the league’s first 100-point scorer while also reaching the 300-point milestone on his OHL career on Feb. 22nd. He had points in 11 of his 12 outings, leading the way with a pair of four-point showings as the Greyhounds played to a record of 8-3-1-0. Frost scored and added three assist in a thrilling 7-6 Greyhounds win over the visiting Niagara IceDogs on Feb. 9th. He chipped in with three points a night later as the Hounds took a 6-3 win over the visiting London Knights. Frost picked up four assists in Feb. 15th‘s 10-4 road win over the Sudbury Wolves before registering his lone multi-goal game of the month with two goals and an assist on Feb 21st in a 4-2 road win over the Windsor Spitfires.

A 19-year-old product of Aurora, Ont., Frost leads the league with 66 assists and 103 points over 53 games. His 304 career regular season points (106-198–304) are the sixth-most in the storied history of the Soo Greyhounds. He is one of just five players in franchise history to record multiple 100-point seasons. Frost represented Canada at the 2019 IIHF World Junior Hockey Championship, leading the team with eight points (4-4–8) over five contests. Originally a fourth round pick from the Barrie Colts Minor Midgets in 2015, Frost was Philadelphia’s first round (27th overall) pick in the 2017 NHL Draft.

OHL Defenceman of the Month – Adam Boqvist (London Knights):
Chicago Blackhawks prospect Adam Boqvist of the London Knights is the OHL Defenceman of the Month for February, leading all rearguards with 19 points including six goals and 13 assists over 13 contests. Boqvist registered six different multi-point performances and was a big contributor on the power play for the Midwest Division-leading Knights. He put up a goal and an assist in a 4-2 win over visiting Kitchener on Feb. 2nd before posting a goal and an assist in a 6-3 victory over visiting Owen Sound on Feb. 8th. Boqvist had another three-point outing with a goal and two helpers on Feb. 10th in Sault Ste. Marie and replicated that production for a third time in the month of February in an 8-5 win over Erie on Feb. 17th. Boqvist carries a six-game point streak into the month of March. He had at least one shot on goal in each of his 13 February contests.

An 18-year-old from Falun, Sweden, Boqvist sits sixth among OHL blueliners with 54 points (17-37–54) over 47 games. The eighth overall pick of the 2018 NHL Draft, Boqvist has recorded 29 of those 54 points since Jan. 1st. The right-shot defender represented Sweden at the 2019 IIHF World Junior Hockey Championship, recording four points (1-3–4) over five games. The Knights selected Boqvist with their second round pick in the 2017 CHL Import Draft.

OHL Rookie of the Month – Cole Perfetti (Saginaw Spirit):
Saginaw Spirit forward Cole Perfetti is the OHL Rookie of the Month for February, leading all freshmen with 21 points including 10 goals and 11 assists over 12 games to go with a plus/minus rating of plus-16. The 17-year-old Perfetti made Spirit history, setting a single season record for rookie goals in a season on Feb. 23rd when he scored a pair in a 6-3 road win over the Hamilton Bulldogs. Perfetti’s 28th of the season pushed him ahead of Jan Mursak (2007) in the franchise record book. The milestone game was one of four three-point performances from Perfetti in February. After scoring in each of his first two games of the month he recorded three assists in a 4-1 road win over the Windsor Spitfires on Feb. 7th. He continued his strong play on Feb. 13th, putting up a goal and two assists in a 9-2 win over visiting Flint. Perfetti also had a three-point night on Family Day, earning second star honours with a goal and two helpers in a 7-6 shootout loss to the Sarnia Sting. The big night in Hamilton was one of two multi-goal efforts in February, joining a two-goal showing on Feb. 21st in Barrie. Perfetti registered points in 11 of his 12 February contests, becoming the first 30-goal rookie scorer in Spirit history with his overtime winner on Sunday in Oshawa. His strong play helped the Spirit climb into the West Division lead as they secured their 40th win for the first time since 2010-11.

A native of Whitby, Ont., Perfetti leads OHL rookies with 30 goals and 63 points over 55 games. He is the second-straight 16-year-old rookie to score 30 goals in a season, following Hamilton’s Arthur Kaliyev who became the first to do so last season since Sarnia’s Alex Galchenyuk in 2010-11. A member of the 2018 OHL Cup Powered by Under Armour All-Star Team last spring, Perfetti was selected fifth overall in the OHL Priority Selection from the Vaughan Kings Minor Midgets. He represented Canada White at the 2018 World Under-17 Hockey Challenge, recording nine points (2-7–9) over five contests. Perfetti will be eligible for the 2020 NHL Draft.

Vaughn OHL Goaltender of the Month – Luke Richardson (Kitchener Rangers):
Nineteen-year-old Kitchener Rangers netminder Luke Richardson is the Vaughn OHL Goaltender of the Month for February, going 8-1-0-1 with a 2.55 goals-against average, .916 save percentage and one shutout over 10 games. Richardson helped the Rangers climb into fifth in the Western Conference with a solid month of February. He suffered just one regulation loss, starting and finishing the month with steady performances. Richardson earned third star honours on Feb. 1st when he stopped 34 of 35 in a 6-1 win over the visiting Owen Sound Attack. His third shutout of the season came Feb. 10th when the Rangers blanked the Sarnia Sting 1-0 on the road as Richardson turned aside all 23 shots he faced. After making 28 saves in a 5-2 win over the Mississauga Steelheads on Feb. 24th, Richardson made 40 saves to close out the month, defeating the same Steelheads by a score of 3-2 on the road this past Wednesday morning as he secured a career-high 24 wins on the season.

A Barrie, Ont. native, Richardson owns a 24-17-2-1 record with a 3.45 goals-against average, .892 save percentage and three shutouts over 44 games this season. Now in his third full OHL season, Richardson was originally Kitchener’s fourth round pick in the 2015 OHL Priority Selection from the North Central Predators Minor Midgets. Though he remains undrafted by an NHL club, Richardson attended camp with the Boston Bruins in 2017.