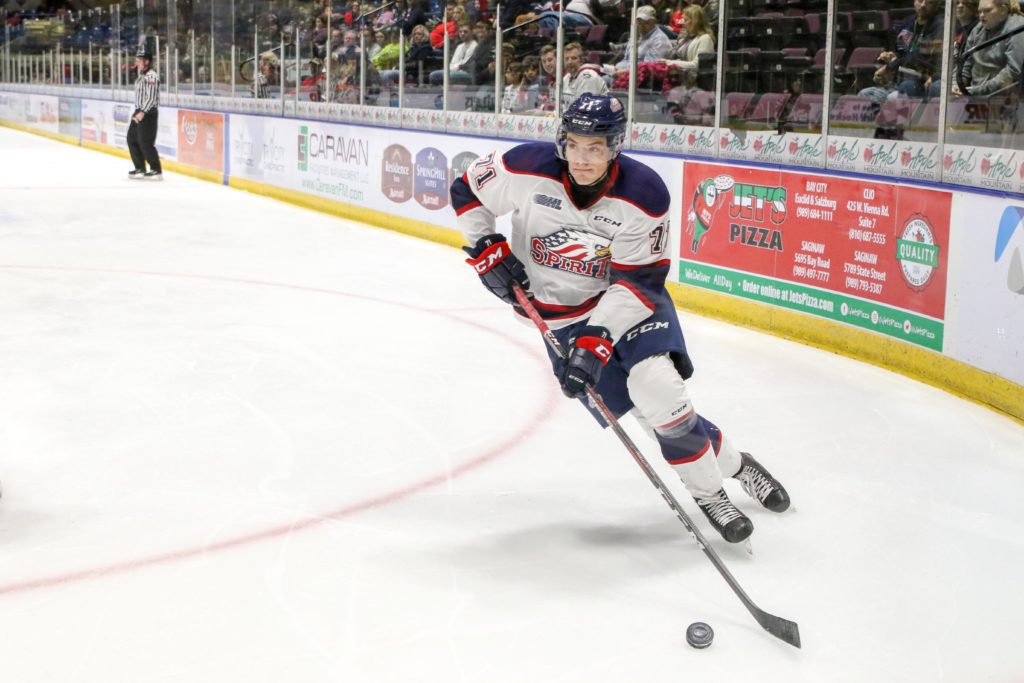 The Saginaw Spirit earned their first power play chance seven minutes into the first period at the Dort Federal Event Center last week, down a goal to their in-state rival, Flint Firebirds, in the Coors Light I-75 Divide season opener.

What felt like an opportunity to not only tie the score in the early going of what was the first of a three-game road trip for Saginaw, but also the start towards eradicating a three-game winless streak, paved way for someone to rise to the occasion in the man-up advantage.

Just 14 seconds before the Firebirds were back to full strength, a poke-through effort gave Porco his fifth goal scored in four straight games. He’d later knock in another for his first multi-goal outing of the season.

Porco, the former first-round pick in the 2017 Ontario Hockey League Under-17 Priority Selection, would also score twice in last Saturday’s 4-3 win over the Erie Otters, receiving the first star of the game for his efforts.

Leading the team in goals with seven and tied for second among all OHL players, Porco has the Spirit enjoying a second place standing with nine points in the Western Conference. Saginaw will make its return to the Dow Event Center this weekend for a two-game home stand.

“With the game slowing down for me, I’m feeling stronger and faster out there on the ice,” said Porco. “It’s allowed me to get more confident and make plays.”

Porco’s emergence and dependability in the offensive zone has climbed to levels that maybe weren’t expected at this point of his junior hockey career. Needing six more points to reach his total from last season as a rookie, Porco has seen his improvement during the offseason translate into productive numbers.

A native of Sault Ste. Marie, Ontario, Porco recently took part in a five-day tryout camp hosted by Canada’s National Men’s Summer Under-18 Team, who’d go on to compete in the Hlinka Gretzky Cup last August. The event brought out all of the country’s top hockey prospects under the age of 18.

“It was a great experience,” Porco said. “Any chance you can put that maple leaf on the front of your sweater is a great opportunity. You learn a lot when playing with the best of the best in Canada. Got to see some of my buddies, play some hockey, and overall just had a great time.”

Even though Porco didn’t make the final roster, it sure hasn’t diminished any interest of him from the National Hockey League. Porco joined Spirit defenseman Caleb Everett among 44 OHL players listed on the Central Scouting’s October ‘Players to Watch’ list for the 2019 NHL Draft.

Of course, while Porco knows there’s room for growth in the months leading up to June in Vancouver, like every other player in this league, to potentially hear his called would be an honor.

“It’d be a very special thing for me and my family, there’s been so much work put in on both sides,” Porco said. “It would definitely be a dream come true one day.”

With the Canadian National Team and NHL both conveying their respected attention to Porco, who scored 22 goals with 19 assists in 33 games during the 2016-17 season with the Vaughan Kings Minor Midget Team, is finally starting to experience a comfort level that wasn’t necessarily enjoyed as much during his first year with the Spirit.

After receiving the Greater Toronto Hockey League Player of the Year honors, lofting expectations and being welcomed to a new environment made way for Porco to record five goals with nine assists in 57 games last season. Two of Porco’s goals were on the power play as he later finished with two points during Saginaw’s first-round exit against the Soo Greyhounds.

Expressing his gratefulness for the fan support in Saginaw during his short time here, Porco also uttered his praises to former team captain Keaton Middleton, who recently agreed to an AHL contract in September with the San Jose Barracuda, and succeeding captain Damien Giroux for elevating his maturity and growth on the ice.

Porco and Giroux have maintained a stronghold on the second line for a majority of this year alongside New York Islanders prospect Blade Jenkins.

“It’s an honor to play alongside those guys,” Porco said. “With Middleton, he was the one who brought up the other rookies and me into this league. He really showed me the OHL’s roots and how to be consistent every night. They’ve both demonstrated how to be a professional on-and-off the ice, which is huge for me moving forward.”

Saginaw will host the North Bay Battalion on Saturday, Oct. 13, before playing the Kitchener Rangers for the second time this season, as their first encounter ended in a 4-3 overtime win last Friday in favor of Saginaw.

To purchase your tickets for all Saginaw Spirit home games, call (989) 497-7747, log on to www.saginawspirit.com or visit the Saginaw Spirit Store at 5789 State Street, Saginaw, MI.

21 Questions with Peter Fleming
2 weeks ago

21 Questions with Pacey Schlueting
3 weeks ago

21 Questions with Ryan Beck
4 weeks ago