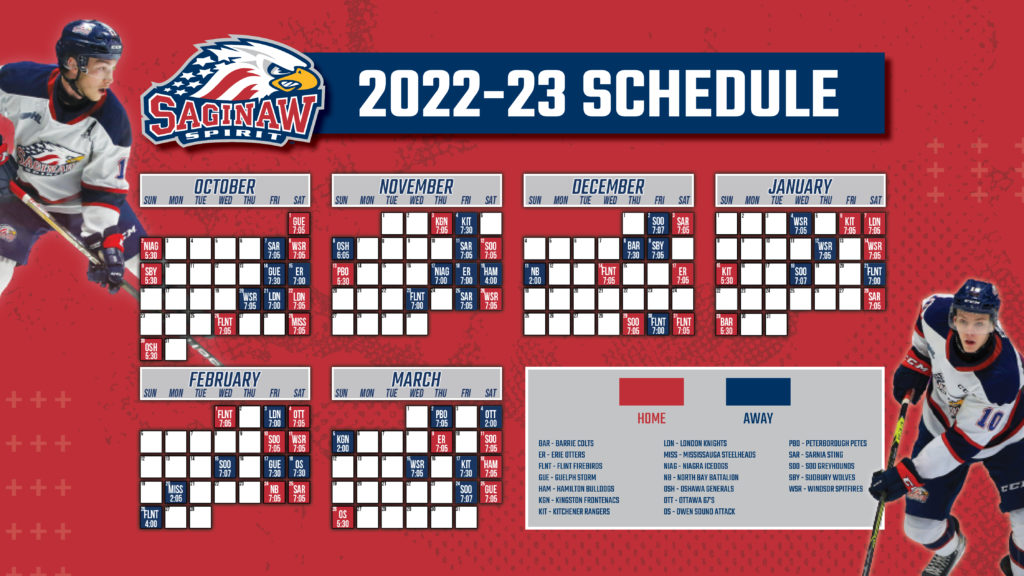 Saginaw, MI – The Saginaw Spirit, in conjunction with the Ontario Hockey League, announced Thursday the regular season schedule for the 2022-23 OHL season.

“With the release of our 2022-2023 game schedule, many exciting months coming up for the Saginaw Spirit players, staff and fans,” said Spirit President and Managing Partner Craig Goslin. “Mark your calendars for the home opener at the Dow on Saturday, October 1st and be the first to see this exciting, young, and talented hockey team begin to compete for another run at a West Division title and beyond. With 18 Saturday night home games, this season’s schedule was constructed with Spirit fans in mind. We also have seven Sunday home games where we plan to build out a promotional calendar that makes the Sunday home games another attractive option for families that wish to bring their kids, family and friends to a Spirit game at The Dow.  Soon, we will release our promotional calendar so fans can synchronize their plans with the Saginaw Spirit 2022-2023 schedule of events.”

Saginaw will play 68-regular season games during the 2022-23 OHL season, 34 at home and 34 on the road. 30 of those games will be challenges from within the West Division, 15 at home and 15 on the road. Saginaw plays Flint, Sault Ste. Marie, and Windsor eight times and the Sarnia Sting six times. The Spirit complete their Western Conference portion of the schedule with 18 games against opponents in the Midwest Division, 9 home and 9 on the road. They play the Erie Otters, London Knights, Kitchener Rangers, and Guelph Storm four times, while facing the Owen Sound Attack two times. Saginaw completes their schedule with 20 games against Eastern Conference opponents playing each team twice, once at home and once on the road.

FRIDAY’S IN THE FAST LANE

Saginaw will play 14 Friday road games this season, by far their busiest traveling night of the campaign. 17 games of their 68-game schedule will be played on Friday night.

The Spirit and Flint Firebirds meet for the first time on October 26 at The Dow Event Center. This is the first of eight meetings this season with their arch rival. The first engagement at The Dort Financial Center occurs on Wednesday, November 23 in the Thanksgiving Eve game. Since the 2015-16 season, the Spirit and Firebirds have gone head-to-head for the Coors Light I-75 Divide Cup. The Firebirds are the keeper of the trophy for the first time since the 2016-17 season, after leading last year’s season-series, 10-5.

The Spirit will play an Eastern Conference opponent for the first time in 940 days when they face the Niagara IceDogs at The Dow Event Center on October 2, 2022. Due to protocols surrounding the Coronavirus, OHL teams played inter-conference games during the entirety of the 2021-22 regular season.