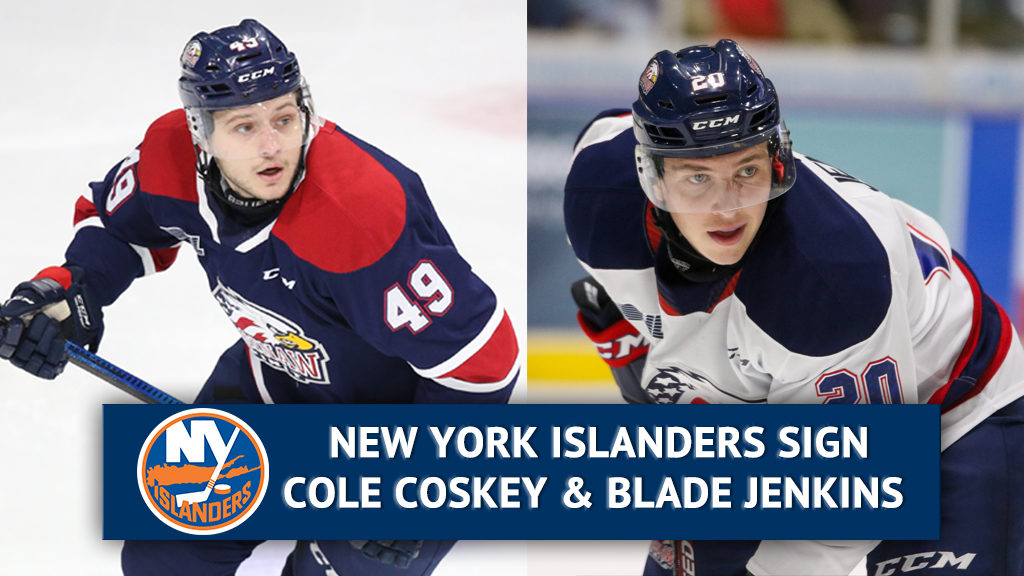 “When we heard the news of the New York Islanders signing Blade and Cole, the Saginaw Spirit organization could not have been happier,” said General Manager Dave Drinkill. “For myself personally, Blade was my first draft pick in Saginaw and it is very gratifying meeting a player and his family at a very young age and then seeing him achieve his goals of being drafted and now signed to an NHL contract. We look forward to following him in his next step of his hockey career.” “Cole Coskey grew up before our eyes here in Saginaw. Through the years, he became a leader on and off of the ice while becoming an elite player for us on the ice. Cole’s ability will forever cement him as one of the best players to ever wear a Spirit uniform. Congratulations to Cole and his family on this marvelous achievement.”

The American-born duo of Coskey and Jenkins each had prior NCAA commitments before signing with the Saginaw Spirit. Coskey signed with the Spirit in the summer of 2015 after being selected in the third round (47th overall) in the 2015 Priority Selection. The Chicago-area native is coming off of his most successful OHL season, scoring 80 points and recording a 30+ goal-season for the second consecutive year.

The Jackson, Michigan native, Jenkins was selected by the Spirit in the first round (fourth overall) back in 2016 and committed to the franchise in the summer of 2017. Jenkins put up 44 points in his rookie OHL season, which was fourth best on the 2017-18 roster and landed him on the OHL First All-Rookie Team and ranking him the 26th best North American Skater heading into the 2018 NHL Draft by NHL Central Scouting.

“We are so thrilled for Blade and his family,” said Spirit Head Coach Chris Lazary. “Blade put his trust in the Saginaw Spirit when he left the U.S. National Team Development Program to further develop his career and provide him with every opportunity to be a professional. To watch Blade accomplish his personal goals of being drafted in to the National Hockey League and sign a contract is a special moment for the organization. Blade is continued evidence that if you fully invest yourself into the Saginaw Spirit program and allow yourself to be coached and developed, your goals can be achieved. Blade will be a Spirit for life.” “Cole, to me, is Mr. Saginaw. He is a five-year player that invested himself in the process. Cole matured during his time in Saginaw and became a leader, wearing a letter for us. Cole has played a significant role in changing the culture of our program. I look forward to watching him progress throughout his professional career and I cannot thank him enough for the impact he has left on our program. “

The New York Islanders selected Jenkins in the fifth round (134th overall) in the 2018 NHL Draft held in Dallas, TX. The 6-foot-2, 210-pound center responded the following OHL season by putting up a career-high 59 points (23G-36A) during the 2018-19 season. Jenkins also had nine points in the 2019 playoffs, including the overtime goal that beat the Sarnia Sting and propelled the team to the second round for the first time since 2012.

Coskey was selected a year later with the Islanders’ last pick in the 2019 Draft (209th overall). With just one remaining season of junior eligibility, Coskey was well on his way to hitting career-highs in goals (34), assists (46), points (80) and shots on goal (238) by starting the ’19-20 season on a six-game point streak. He would notch two more six-game point streaks throughout the regular season, before finishing on a seven-game, point streak.  His 11 power play goals this season also tied a career-high set during the 2018-19 season.