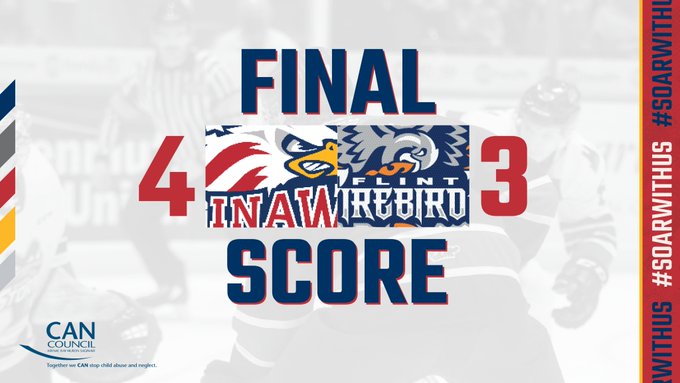 15-year-old Michael Misa scored the game winner in overtime, and the Spirit showed their depth by having four separate goal scorers in the win. Saginaw has now won seven consecutive games and nine of their last ten.

The Firebirds struck first with a goal at 5:26 in the first period. Chicago Blackhawks prospect Gavin Hayes gave the puck to Owen Pitters from the left side for a breakaway chance and his second goal of the season.

Michell Smith was called for hooking at 6:11 in the first period, giving Flint their first powerplay of the game. The Spirit showcased their league-leading penalty kill and shut down the Firebird powerplay.

The Firebirds got another man-advantage after Nic Sima took a high sticking penalty at 9:40 in the first frame. Despite several shots, Saginaw was able to nullify the chance.

The Spirit got their first chance on the man-advantage after Gavin Hayes took a boarding penalty at 14:15 in the opening period. Flint was unable to score on the chance.

The second period started with Saginaw on the penalty kill after Olivier Savard was called for hooking at 3:43. The Spirit successfully killed off the chance.

The Spirit were able to even the game up on a penalty shot goal at 5:26 in the middle period. After being hauled down on a breakaway, rookie Joey Willis slipped a backhanded shot between Will Cranley’s legs for his sixth of the season. This was the first penalty shot attempt for Willis.

Tristan Bertucci took a roughing penalty at 10:57 in the middle frame, giving Saginaw a chance on the man-advantage. The Spirit could not convert on the chance

Saginaw took the lead at 17:09 in the middle period courtesy of Zayne Parekh. The defensemen scored from the top of the point after Michael Misa passed to him from the left side of the zone. Calem Mangone earned an assist on the play.

At the end of the second period, Saginaw led 2-1, while the Firebirds led 21-12 on the shot board.

The third period began with a four-on-four chance for both teams after Sebastien Gervais and Marko Stojkov were both called for roughing at 3:12. Neither team capitalized on the chance.

The Spirt added to their lead at 6:37 in the third frame. Mitchell Smith earned his fourth of the season after Dean Loukus slipped a pass between two Flint defenders. Smith skated in on Cranley and jammed the puck past his right skate for the 3-1 lead.

The Firebirds answered back at 8:07 in the final period. Braeden Kressler scored his 11th goal of the season after Tristan Bertucci shot at Lennox for a rebound. Zacharie Giroux earned his tenth assist on the season from the play.

Flint tied the game after 12:46 in the third frame. Tyler Deline found Gavin Hayes in the middle of the offensive zone. Riley Piercey was next-in-line to receive the puck and potted his tenth goal of the season by shooting above Lennox for the game-tying score.

With time running out in the third period, Flint took a delay of game penalty at 18:49, but Saginaw was unable to score. The penalty would carry over beyond regulation

Michael Misa scored the overtime winner on the powerplay just 27 seconds in. Matyas Sapovaliv won the faceoff and slipped a pass to Pavel Mintyukov. He found Misa in the high slot, who fired a shot over Cranley’s blocker for his team-leading 13th goal of the season.

Saginaw’s next game is Friday, November 25, against the Sarnia Sting at the Progressive Auto Sales Arena in Sarnia, Ontario. Puck drop is at 7:05 p.m.