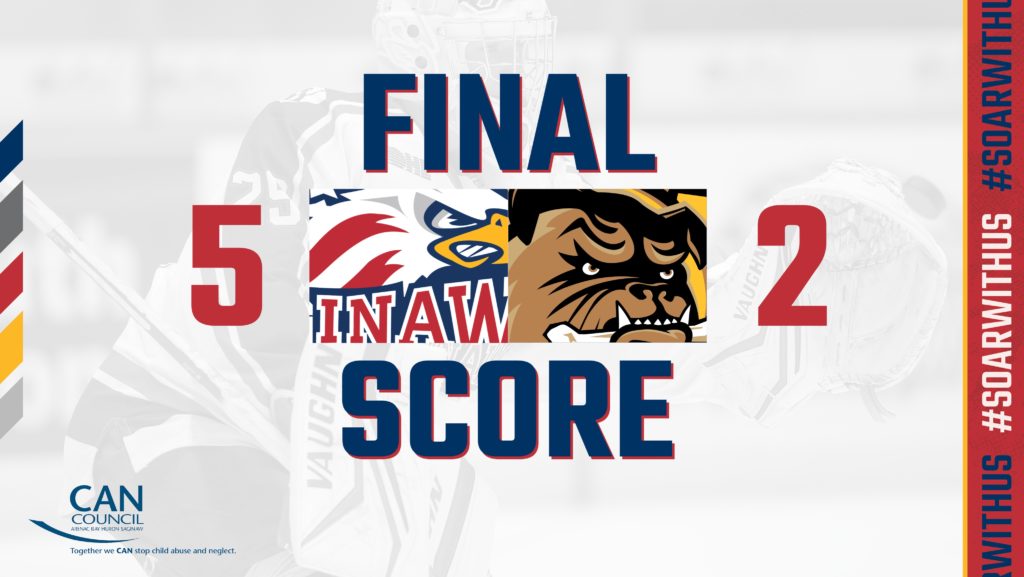 Hamilton, Ont. – The Saginaw Spirit (14-6-1-0) won their sixth straight game as they defeated the Hamilton Bulldogs (7-10-1-0) Saturday, November 19, with a final score of 5-2 at the FirstOntario Centre in Hamilton, Ontario.

2022 OHL first round pick Michael Misa scored two goals in the game, and Calem Mangone added a goal and two assissts. Saginaw has won the last six games they have played, and lead the both the West Division and Western Conference.

The game opened with both teams making plays and taking shots but no goals. Play was uninterrupted for the first eight minutes, until Sebastien Gervais got a chance on a breakaway but was stopped by Hamilton goaltender Matteo Drobac.

The Spirit got their first powerplay chance after the Bulldogs committed a too many men on the ice penalty at 9:27 in the first period. Saginaw was unsuccessful on the chance despite several shots.

Lawson Sherk took a double-minor high sticking penalty against Matyas Sapovalev at 14:19 in the first frame and the Spirit capitalized by scoring twice during the advantage.

The first goal, which was scored at 14:48, began on the right side of the zone when Calem Mangone passed to Mitchell Smith. The Saginaw native shot the puck from the top of the zone and Nic Sima got his first goal for the Spirit after deflecting it past Drobac.

The second powerplay goal was scored at 16:42 after another deflection. 2025 draft eligible Michael Misa deflected a Zayne Parekh shot for his 11th goal of the season. Pavel Mintyukov was credited with an assist on the play.

The Spirit added to their lead at 19:17 in the first frame. Calem Mangone earned his second assist after he gave the puck to Joey Willis, and he skated up the left side where then he took a wrist shot that was potted close in by Michael Misa for his second goal of the game.

The first period ended with Saginaw leading 3-0 and leading shots, 16-5.

The second period began with the Bulldogs on the powerplay after Cam Gauvreau was called for checking from behind 26 seconds into the middle period. The Spirit were able to kill off the penalty with the help of goaltender Andrew Oke.

Saginaw got a chance on the man-advantage after Brenden Anderson was called for a check to the head penalty at 5:22 in the middle frame. The Spirit were unable to score on the chance.

The Spirit extended their lead shortly after the penalty expired at 7:24 in the middle period. Calem Mangone got his second point of the game after Mitchell Smith passed to him from the left side of the zone. Joey Willis earned his second assist of the game on the play.

The Bulldogs got a man-advantage after Cam Gauvreau took a cross checking penalty at 13:35 in the middle period. Saginaw was able to score a shorthanded goal at 13:58 after Theo Hill took a shot that careened off a Hamilton skater and went past Drobac to make it 5-0 Saginaw.

The second period ended with Saginaw increasing their lead to 5-0 and leading shots, 31-17.

The third period started with new pressure from Hamilton, with the team taking several shots and holding the puck in the zone.

At 3:26 in the third frame, Olivier Savard and Artem Grushnikov dropped the gloves. Savard was called for instigator and the Bulldogs went on the powerplay. The club was unable to score on the chance.

Hamilton scored their first goal of the game at 11:37 in the final period. Jorian Donovan received the puck from Patrick Thomas after he skated behind the net. Braeden O’Keefe earned an assist on the play.

The Spirit went down a skater when Theo Hill took a tripping penalty at 16:56 in the third. The Bulldogs scored on the chance at 17:41. Ryan Humphrey started the play by passing to Logan Morrison who was on his right. Avery Hayes received the puck from Morrison and potted his 14th goal of the season.

Andrew Oke started for Saginaw, making 26 saves on 28 shots. Matteo Drobac played the first half of the game but was replaced by Tristan Malboeuf in the second period. Drobac made 21 saves on 26 shots, and Malboeuf stopped all seven shots he faced.

With time winding down in the game, Hamilton had several long possessions, but the pressure was not enough, and the game ended with a 5-2 Saginaw win. The Spirit improve to 14-6-1-0.

Saginaw’s next game is against the Flint Firebirds Wednesday, November 23, at the Dort Financial Center in Flint, Michigan. Puck drop against the Firebirds is set for 7:00pm.