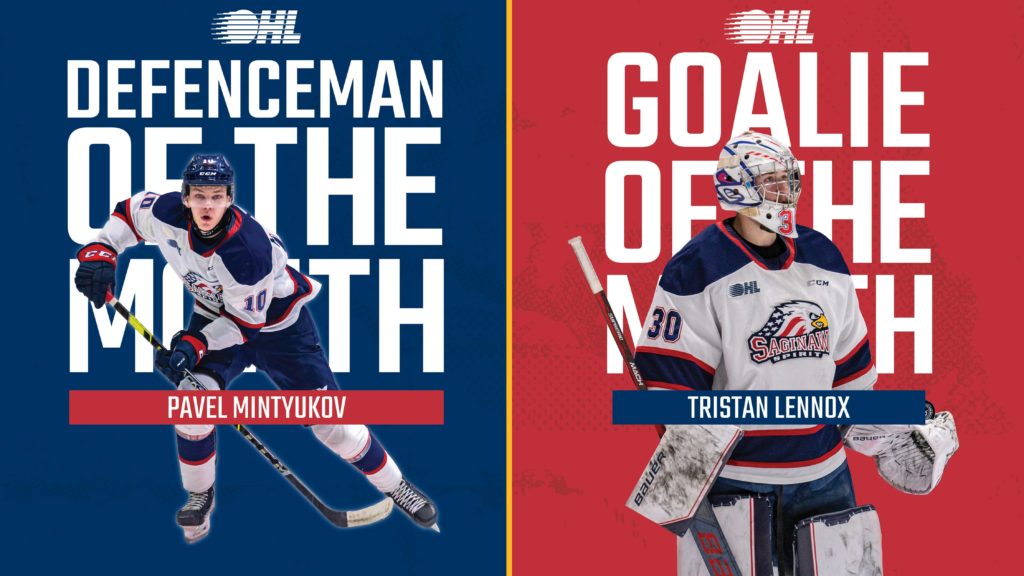 OHL Player of the Month – Sean McGurn (London Knights):
London Knights forward Sean McGurn is the OHL Player of the Month for November, leading all players with 20 points including six goals, 14 assists and a plus/minus rating of plus-7 in 12 contests last month. The overage centreman helped the Knights turn around a slow start to their season, registering points in 10 of his 12 outings as London played to a November mark of 10-2-0-0. McGurn logged seven multi-point performances, including three straight capped by a goal and two helpers on Nov. 12th in Windsor as the Knights defeated the Spitfires 6-1. McGurn scored in four consecutive contests as part of a 12-game point streak. He posted another goal and two assist showing on Nov. 19th in Flint as the Knights defeated the Firebirds 7-4. He did so again on Nov. 27th in Oshawa as London skated to a 4-2 win. McGurn becomes the first Knights player to earn OHL Player of the Month honours since Mitch Marner last received the title in February 2016.

A 20-year-old native of Ottawa, Ont., McGurn is in his third season with the Knights and sits fourth in OHL scoring with 32 points (10-22–32) in 23 games. He’s won 57.4 percent of his faceoffs this season while taking just two minutes in penalties thus far. He’s accumulated 108 points (31-77–108) over 127 regular season games since being selected by London in the third round (53rd overall) of the 2018 OHL Priority Selection. McGurn attended rookie camp with the Toronto Maple Leafs in September.

OHL Defenceman of the Month – Pavel Mintyukov (Saginaw Spirit):
For the second straight month, Anaheim Ducks prospect Pavel Mintyukov of the Saginaw Spirit is the OHL Defenceman of the Month, leading all defenders with 17 points including six goals, 11 assists and a plus/minus rating of plus-12 in 11 games. Mintyukov’s continued excellence on the blue line helped the Spirit play to a November record of 10-1-0-0 as they roll into the month of December as the hottest team in the OHL. His month included six different multi-point showings, starting with a goal and an assist on Nov. 3rd as the Spirit came back to defeat the Kingston Frontenacs 3-2. He tacked on three points (1-2–3) on Nov. 6th in Oshawa as the Spirit took a 5-0 road win. Mintyukov registered his second multi-goal showing of the campaign on Nov. 12th against Sault Ste. Marie, tying the game with 16 seconds to spare in an eventual 4-3 overtime win over the Greyhounds. He rounded-out November with back-to-back multi-point totals, picking up a goal and an assist in a 4-1 win over Sarnia on Nov. 25th before scoring and adding two helpers in a Nov. 26th 7-2 win over the Windsor Spitfires. This marks Mintyukov’s third OHL Defenceman of the Month honour following previous titles in October 2022 and March 2021. He’s the first player to be named OHL Defenceman of the Month in each of the first two months of a season since Dougie Hamilton of the Niagara IceDogs in October and November 2011.

A recently-turned 19-year-old standing 6-foot-3 and 195Ibs., Mintyukov sits second in OHL scoring with 35 points (12-23–35) in 24 games this season, paired with the League’s third-best plus/minus rating of plus-19. He became the first defenceman to ever lead the Spirit in scoring last season, recording 62 points (17-45–62) in 67 games before being selected 10th overall by the Anaheim Ducks in the 2022 NHL Draft. The Spirit selected Mintyukov with the 52nd overall pick of the 2020 CHL Import Draft. He was voted to the OHL’s third all-star team last season.

OHL Goaltender of the Month – Tristan Lennox (Saginaw Spirit):
New York Islanders prospect Tristan Lennox of the Saginaw Spirit is the OHL Goaltender of the Month for November, helping the Spirit ascend to first place in the West Division standings with a record of 6-1-0-0, goals-against average of 1.86 and save percentage of .931 in seven appearances. After his lone loss to start the month, Lennox posted his first shutout of the campaign on Nov. 6th in Oshawa, making 26 saves as the Spirit defeated the Generals 5-0. He turned aside 28 shots a week later in Sarnia as the Spirit defeated the Sting by a score of 4-3 in overtime on Nov. 11th. Lennox registered 36 saves in a 4-3 overtime road win over the Flint Firebirds on Nov. 23rd, earning second star recognition for his efforts. He closed out November with a sixth straight win on Nov. 26th, making 27 saves as the Spirit defeated visiting Windsor 7-2 to match a franchise record with their ninth consecutive victory. Lennox is the first Spirit goaltender to earn OHL Goaltender of the Month honours since Ivan Prosvetov who last did so in March 2019.

A 20-year-old from Cambridge, Ont., Lennox owns a 12-3-0-0 record with a 2.95 goals-against average and .891 save percentage through 16 games in this, his fourth OHL season. The overage goaltender has played to a career mark of 46-33-3-2 with a 3.25 goals-against average and .887 save percentage in 92 regular season games, all with the Spirit who selected him in the second round (26th overall) of the 2018 OHL Priority Selection. Lennox was drafted by the New York Islanders in the third round (93rd overall) of the 2021 NHL Draft.

OHL Rookie of the Month – Oliver Bonk (London Knights):
Draft eligible London Knights blueliner Oliver Bonk is the OHL Rookie of the Month for November, leading all rookies with 14 points including three goals, 11 assists and a plus/minus rating of plus-5 in 12 games. Bonk’s presence and increased responsibility on the Knights blue line helped the green and gold surge to a 10-2-0-0 record in the month of November, pushing them to the top of the Midwest Division standings. Bonk recorded points in 10 of his 12 November contests, opening the month by matching his October total in a single game with three points (1-2–3) in a 6-3 loss to the Erie Otters on Nov. 4th. Bonk registered points in eight consecutive games, capped by a goal and an assist on Nov. 19th in Flint as the Knights defeated the Firebirds 7-4. He lit the lamp again on Nov. 25th in Kitchener as the Knights defeated the rival Rangers 4-0. Bonk becomes the first Knights defenceman to earn OHL Rookie of the Month recognition since John Carlson last did so in December 2008.

A 17-year-old from Ottawa, Ont., Bonk leads the Knights offensively from the blue line with 18 point (5-13–18) in 23 games. The 6-foot-2, 179Ib. right-shot appeared in 10 games with London last season, recording three assists while also excelling with the St. Thomas Stars of the GOJHL where he posted 32 points (5-27–32) in as many games to earn GOJHL West Top Rookie Defenceman honours, also being voted to the GOJHL West Rookie All-Star Team. The son of former long-time NHL forward Radek Bonk, Oliver was London’s second round (26th overall) pick in the 2021 OHL Priority Selection. He won gold with Canada in this past summer’s Hlinka Gretzky Cup Tournament. Bonk was listed as a ‘B’ rated skater on NHL Central Scouting’s latest Players to Watch list released on Oct. 25th.