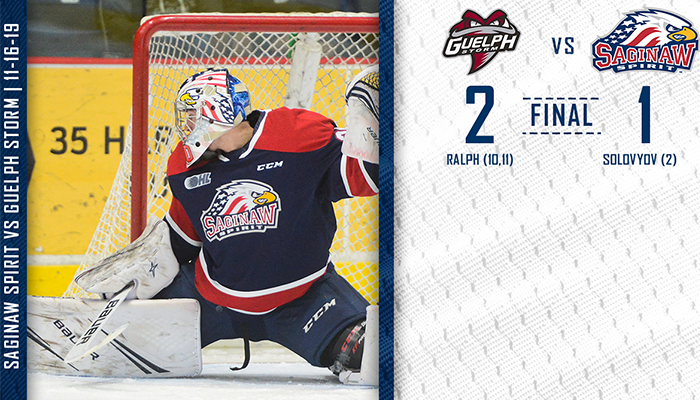 GUELPH, ONT. – The Saginaw Spirit’s win-streak ends at three games after they dropped a 2-1 decision to the Midwest Division leading Guelph Storm on the road on Saturday evening.

Guelph extended their win-streak to a team-high eight games with the victory over Saginaw.

The Ontario Hockey League’s save percentage leader Nico Daws stopped 26 of Saginaw’s 27 shots in the game.

New York Islanders prospect Blade Jenkins nearly scored for the Spirit just under four minutes into the opening period in the slot.  Defenseman Ilya Solovyov sent a pass to the Jackson, Michigan native Jenkins in front of the Guelph net.  Jenkins showed patience but could not lift the puck over the Guelph goaltender Nico Daws’ pad.

On the next shift, 17-year old Saginaw goaltender Tristan Lennox was tested by Guelph on a two-on-one rush up ice.  Center Jacob Roach fired a wrist shot from the top of the left circle that Lennox fought off with a pad save to keep the game scoreless five minutes into play.

Guelph leading score Pavel Gogolev tested the Spirit netminder midway through the first on a point-blank chance.  The Moscow, Russia native Gogolev received a pass at the top of the slot and took a wrist shot that was denied by Lennox’s right pad.

Gogolev had another scoring opportunity late in the third period on a give-and-go passing play in the Spirit zone.

The Russian forward passed the puck to Eric Uba in the left corner and cut towards the Saginaw net, Uba returned the pass as Gogolev attempted a deke to the forehand.  Lennox stretched his pad across the crease as Gogolev tried to tuck the puck into the net to keep the game scoreless through the first 20 minutes of play.

Saginaw outshot Guelph 8-6 in the first period as the teams went into the dressing room in a scoreless tie.

After Minnesota Wild prospect Fedor Gordeev was charged with a holding penalty the Spirit broke the scoreless tie 5:43 into the second frame with a powerplay goal from Solovyov.

Top 2020 NHL Draft prospect Cole Perfetti patiently stickhandled through traffic at the right face-off circle and sent a pass over to the Spirit defenseman at the point.  Solovyov sniped a wrist shot into the top-left corner past the goaltender Daws for the 1-0 lead.

As Perfetti served a minor penalty for goaltender interference, the Storm tied the game on Cedric Ralph’s 10th goal of the season.  Gordeev’s point shot rebounded in front of the crease where Ralph collected the puck and sent the puck past Lennox to tie the game, 1-1.

With just 26 seconds left in the second period, Ralph scored his second goal of the game to give Guelph a one-goal lead.  Gordeev sent a point shot that rebounded left to Ralph off of Lennox.  The Storm left-winger fired a quick shot into the Saginaw net before Lennox could slide to cover the left post.

Guelph took a 2-1 lead into the second intermission despite a 19-15 shot advantage for Saginaw through two periods of play.

2020 NHL Draft prospect Ethan Cardwell nearly pulled the Spirit even early in the third period on a breakaway.  Jake Goldowski feathered a pass over to Cardwell into the Guelph zone and the rookie forward ripped a snapshot off the post into the corner.

Saginaw kept the pressure up with just over five minutes left in regulation as Perfetti cut towards the net from the left corner.  The Spirit forward attempted to reach a backhand shot around Daws but the Guelph goaltender stayed with the puck to keep it out of the net.

The Spirit pulled Lennox with 1:45 left in regulation but was unable to put anything past the Storm goaltender Nico Daws.  Daws allowed just one-goal on 27 shots

The Saginaw Spirit look to get back on track at home on Thursday, November 21 when they host the Owen Sound Attack for the first of two meetings this season.  Puck drop from Wendler Arena inside The Dow Event Center begins at 7:05 p.m.  The Spirit are selling $6 student and military rush tickets for the game against the Attack.