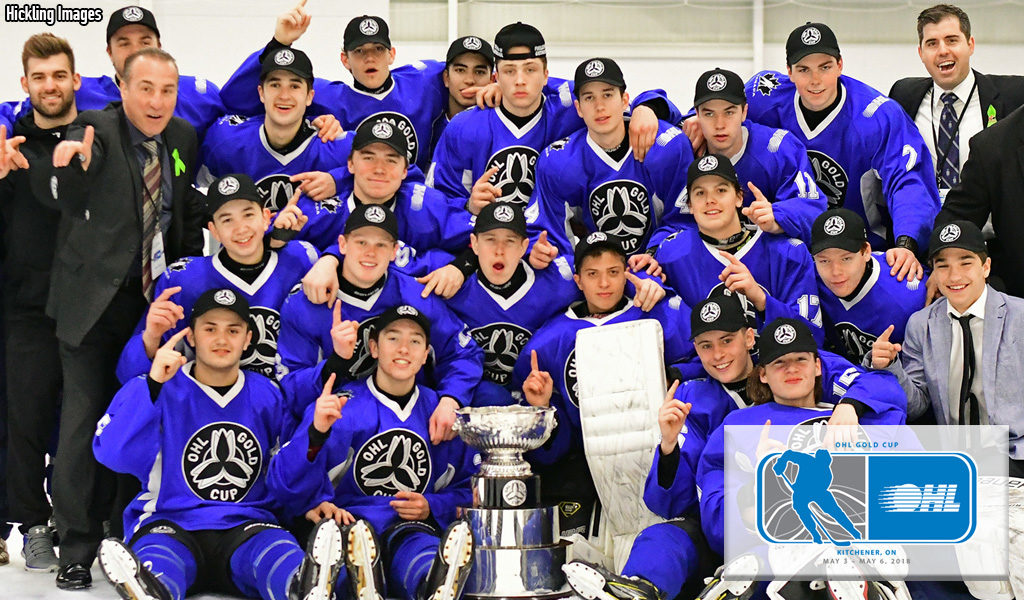 It came down to an all-GTHL Championship Final and GTHL Blue proved too much for GTHL Red as Will Cuylle (PBO) and Dylan Robinson (OSH) both had two goals in an 8-2 victory to close out the tournament.

Uberti finished as the event’s leading scorer with nine points (4-5–9) in four games while teammate Cuylle finished tied for the goal-scoring title with five.

Another inter-league showdown saw OMHA Black defeat OMHA White by a score of 7-3 to claim bronze at the 2018 OHL Gold Cup.

Ryan Smith (SBY) scored a pair of goals while Evan Vierling (FLNT) chipped in with three assists to lead the way to victory.

Tied 3-3 after two periods, OMHA Black pulled away in the third with four unanswered goals as Ty Collins (GUE) netted the power play winner 1:07 into he final stanza.

The Consolation Final of the 2018 OHL Gold Cup came down to a shootout as Ryan Beck (BAR) netted the game winner to lift Team HNO to a 4-3 victory over Team ALLIANCE.

Michael Stubbs (MISS) and Sahil Panwar (LDN)  also scored shootout goals for HNO as they wrapped things up with a 2-2-0-0 record. Goaltender Eric Vanska made 29 saves in regulation before stopping three of the five ALLIANCE shooters he faced in the shootout.

Beck, Ambrosio and Jacob Perreault (SAR) finished in a three-way tie for HNO’s tournament scoring lead with four points each.

Maggio, defenceman Nathan Small (OS) and forward Joseph Serpa (KIT) each had four points for Team ALLIANCE while goaltender Mathias Onuska (KGN) let all netminders with a 1.51 goals-against average and a .950 save percentage.

Brunette’s third period marker came on the power play four minutes into the frame and would stand as the difference-maker as NOHA finished with a 2-2-0-0 record.

Hunter Brazier (OSH) and Samuel Vachon tacked on goals for NOHA while netminder Owen Kilganon made 34 saves, backstopping his team to victory despite being outshot 37-28.

Gavin Brown, David Campbell (NB) and Giordano Biondi (SBY) finished in a three-way tie for the NOHA scoring lead with four points each.

Team HEO carried the play but came away empty-handed, getting a pair of goals from Sean McGurn (LDN) while Josh Barnes (OS) added a single and Kyle McDonald (WSR) had a pair of assists.

For full coverage of the 2018 OHL Gold Cup, visit ohlgoldcup.com.