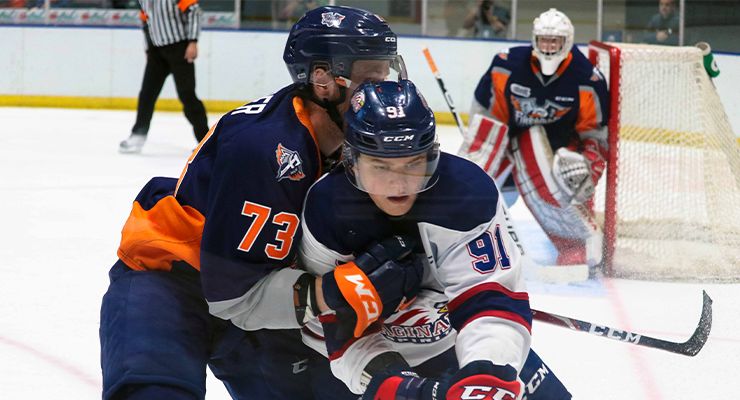 FLINT, MI – The Saginaw Spirit wrap up the 2019 preseason with a road match against the in-state rival Flint Firebirds Saturday, September 14.  Tonight’s puck drop is scheduled for 7:00 p.m. from the Flint Iceland Arenas.

The Spirit dropped their last preseason game at home against the Firebirds, 7-5 Friday evening to even their preseason record to 2-2.  Despite the loss, the Spirit got offensive contributions by three players from the 2019 Ontario Hockey League (OHL) Priority Selection Draft.

Saginaw Spirit first round pick Connor Punnett and second round pick Josh Bloom each added helpers in the contest.

Davis ‘T-Bone’ Codd, a 2019 fourth round pick of the Spirit, scored his first goal of the preseason to open the scoring in the game.

Saginaw, Michigan native Mitchell Smith contributed three assists for his hometown team in the losing effort.  The defenseman was selected by the Spirit in the fifth round of the 2018 OHL Priority Selection Draft.

Saginaw’s 2019 first round Import Draft selection Ilya Solovyov notched his second goal of the preseason on the power play.  The Belarusian defenseman hammered home a one-timer in the first period of the contest.

The Saginaw Spirit kicks off the 2019-20 regular season on Friday, September 20 on the road against the Kitchener Rangers.  The puck drops at 7:30 p.m. from the Kitchener Memorial Auditorium with pregame coverage beginning 15 minutes prior to puck drop.

Fans can catch all the action on the flagship WSGW Newsradio 100.5 FM and fmtalk1005.com with the voice of the Saginaw Spirit hockey Joey Battaino.