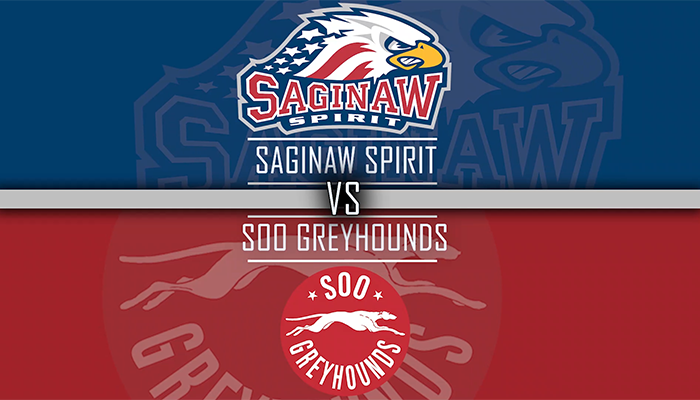 Through six games this season, the Spirit have been victorious in the last five contests against the Greyhounds, after dropping the opening meeting on September 28 in Saginaw.

Wilde, who played 20 games this season with the New York Islanders AHL affiliate Bridgeport Sound Tigers, was returned to the Saginaw Spirit for the remainder of this season.  The Plymouth, Michigan native Wilde tallied 19 goals and 51 assists last season for the Spirit, good for third among OHL defenseman and was a finalist for OHL Defenseman of the Year during the 2018-19 season.

Saginaw is coming off a 3-2 victory in an overtime thriller at home Saturday night behind fourth rated North American 2020 NHL Draft prospect Cole Perfetti’s 30th goal of the season just 1:19 into overtime.  The Whitby, Ontario native Perfetti leads the Saginaw Spirit in both assists (57) and points (87) this season.  With an assist in the victory against Guelph Saturday, Perfetti is currently tied with Saginaw Spirit alum Josh Shalla for 10th all-time in team-history with 94 career OHL assists.

2019 Carolina Hurricanes first round pick Ryan Suzuki supplied the assist on Perfetti’s overtime winner Saturday evening.  The London, Ontario native Suzuki has points in 10 of the 12 games the centerman has played in a Saginaw Spirit uniform.

The Soo Greyhounds are coming off a 10-1 dominant victory over the Central Division’s Niagara IceDogs Saturday evening.  The Greyhounds converted on four of their five man-power advantages against the IceDogs.

2020 NHL Draft prospect Tanner Dickinson provided four points with a goal and three assists for the Greyhounds Saturday night, which was good for the game’s first-star honor.  The Soo rookie has five goals and 26 assists for 31 points in his first OHL season with the Greyhounds.

Overage goaltender Bailey Brkin allowed just one goal on 24 Niagara IceDogs shots Saturday night en route to his 15th victory of the season.  In 25 appearances this season for the Greyhounds, the Sherwood Park, Alberta native provided a goals-against average of 3.45 with a .883 save percentage.

The Soo Greyhounds have one player on their roster drafted by a NHL club in defenseman Jacob LeGuerrier (Montreal Canadiens).