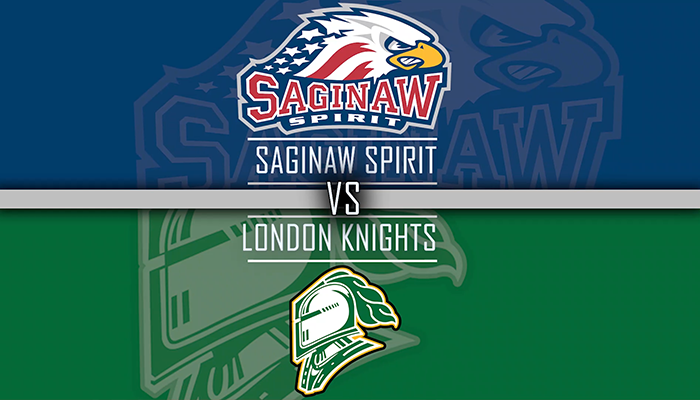 The teams split the first two meetings of the season, where each team handled business on home ice.  Saginaw defeated London 6-3 the last time the two teams faced off at The Dow.

Saginaw defeated the in-state rival Flint Firebirds for the eighth consecutive time at The Dort Federal Credit Union Event Center Friday evening.  The Spirit are 11-0-2-0 in their last 13 games away from home against the West Division rival Firebirds.

The Saginaw Spirit made a splash on the Ontario Hockey League’s (OHL) trade deadline January 10 when they acquired 2019 Carolina Hurricanes first round pick Ryan Suzuki from the Barrie Colts.  Suzuki, 18, contributed two assists in his Saginaw Spirit debut against the Flint Firebirds Friday night.  The London, Ontario native Suzuki has five goals and 20 assists this season, even though he missed an extended period due to an eye injury suffered in a game against the Spirit back on November 1.  The former Barrie Colts first overall pick has been held scoreless in just five of the 22 games he has played this season.

‘A’ ranked 2020 NHL Draft prospect Cole Perfetti extended his career-high point streak to 10 games with two assists Friday evening in the victory over Flint.  The Saginaw Spirit leading scorer has six goals and four assists in just six career games against the London Knights, including a four-goal performance against London on March 9 of last season.  The Whitby, Ontario native Perfetti is third among OHL players this season with 66 points (22G, 44A) in 39 games.

Saginaw Spirit captain Damien Giroux notched his team-leading 25th and 26th goals in the victory over the Firebirds Friday.  The Minnesota Wild prospect sits ninth among OHL players this season with 26 goals.  Giroux has points in four of the last five games for the Saginaw Spirit with four goals and four assists for eight points during the stretch.

New York Islanders seventh round pick Cole Coskey also put two goals in the back of the Firebirds net on Friday night, including what proved to be the game-winner in the second period of the contest.  The Zion, Illinois native Coskey tied Spirit alums Top Pyatt and Vincent Trocheck for fourth in team-history with 94 career goals.  Trocheck, a Florida Panthers forward and 2017 NHL All-Star, is the lone Saginaw Spirit player with his number retired by the club.

New York Islanders prospect Blade Jenkins was rewarded for his strong play since returning from injury with a point Friday night against Flint. The Jackson, Michigan native Jenkins has seven goals and 15 assists in limited time for the Spirit after a lower body injury kept him out for nearly a month.

The Knights are coming off a 5-2 home victory Friday night at The Budweiser Gardens over the Barrie Colts.

2018 San Jose Sharks first round pick Ryan Merkley tallied two goals and assist in the victory over the Colts Friday evening.  The former Guelph Storm first overall pick is third among OHL defensemen this season with 44 points in 36 games.  Merkley was second in the OHL last season in defensive scoring with 71 points.

Chicago Blackhawks signee Alec Regula tallied the eventual game-winner in the 5-2 victory over the Barrie Colts.  The former Detroit Red Wings draft pick 12 goals and 16 assists from the backend this season for the Knights, including a three-point night in a loss to the Saginaw Spirit this season at The Dow.

2019 Washington Capitals first round selection Connor McMichael brings a three-game point streak into the game against the Spirit after he contributed an assist in the victory over Barrie.  The London Knights leading scorer McMichael has scored at least a point in 26 of the 28 games he has played in this season.

Columbus Blue Jackets signee Liam Foudy provided the empty-net dagger in Friday’s victory.  The left-winger has 14 goals and 14 assists for 28 points in just 21 games this season with London.  Like McMichael, Foudy has been a consistent contributor for London this season and been held scoreless in just three of his 21 games played this year.

The Knights have four players listed in the 2020 NHL Central Scouting ‘Players to Watch’ list, including ‘A’ prospect Antonio Stranges, ‘B’ prospect Kirill Steklov, as well as ‘C’ prospects Luke Evangelista and Gerard Keane.

Saginaw has two players listed in the 2020 NHL Central Scouting ‘Players to Watch’ list, including ‘A’ prospect Cole Perfetti. Rookie Ilya Solovyov is listed as a ‘C’ prospect.

Tonight’s game will be played as scheduled at 7:05 p.m. this evening at The Dow Event Center.