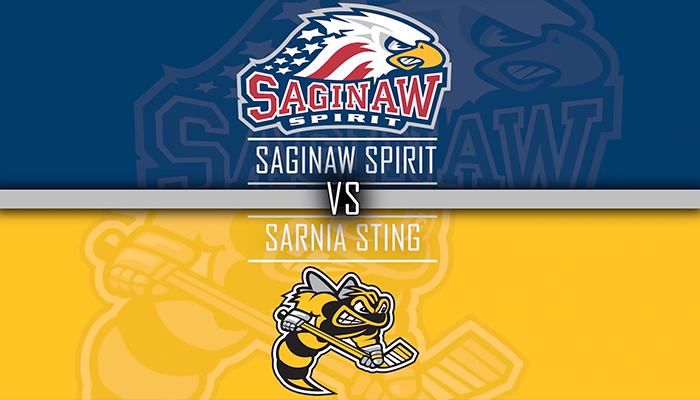 Sarnia, ON. – Some of the top-2020 NHL Draft prospects face-off this weekend when the Saginaw Spirit (29-14-2-2 62 pts.) finish a five-game road swing against West Division foe, Sarnia Sting (16-26-4-1 37pts.) for the fifth of six regular season meetings this season.  Puck drop from the Progressive Auto Sales Arena in Sarnia, Ontario begins at 7:05 p.m.

Saginaw has dominated the Sting this season, winning all four contests with a goal differential of plus-12 during the games.  Including last year’s postseason, the Saginaw Spirit have won the last nine consecutive games and 10 of the last 11 outings against the Sting.

Perfetti and the Spirit return home Saturday, February 1 to battle against 2020 NHL Draft prospect Jamie Drysdale and the Erie Otters on Shocks and Saves Night presented by Pulse 3 Foundation and Mobile Medical Response at The Dow Event Center in Saginaw, Michigan.  There is a 7:05 p.m. puck drop for the second of four meetings of the season. The charity game with Detroit Red Wings Alumni Jiri Fischer, Darren McCarty, John Ogrodnick, Brent Fedyk, Mike Donnelly, and John Blum playing with local area doctors, first responders, and local celebrities begins at 4:00 p.m.

NHL Central Scouting’s fourth-rated North American prospect ahead of the 2020 NHL Draft Cole Perfetti scored his 28th goal of the season in the defeat to the 67’s.  The Whitby, Ontario native is amid a four-game point streak and has points in 19 of the last 20 games the forward has played.  Perfetti (28G, 54A) is currently tied with Ottawa’s Marco Rossi for first among OHL players with 82 points.  With the goal Sunday, Perfetti tied Saginaw Spirit alum Jimmy Lodge for 15th in team-history with 65 career OHL goals.

2019 Carolina Hurricanes 28th overall pick Ryan Suzuki assisted on Perfetti’s first period goal against Ottawa Sunday afternoon.  The former OHL Priority Draft first-overall pick of the Barrie Colts has four goals and nine assists for 13 points in the eight games since the Spirit acquired the centerman prior to the trade deadline.  During his eight games with the Saginaw Spirit, Suzuki has a plus/minus rating of plus-eight.

Dexter, Michigan native D.J. Busdeker extended his goal streak to three games with a third period tally against the Ottawa 67’s.  In his last five games, the overage defenseman Busdeker has six goals and two assists for eight points.  The Saginaw blueliner is seventh among OHL defensemen this season with 13 goals.

Captain Damien Giroux contributed to the scoresheet with an assist in the game against the 67’s to extend his point streak to three games.  The Minnesota Wild prospect has been dominant this season against the Sting, with five goals and two assists in four games against the West Division foe.  The Hanmer, Ontario native leads all Saginaw Spirit players this season with 29 goals, which is a goal shy of the forward’s career-high 30 markers last season.

The Sarnia Sting lost a 3-2 shootout thriller against the Windsor Spitfires in their last game Sunday night.  Rookie goaltender Benjamin Gaudreau stopped 36 of Windsor’s 38 shots through regulation and overtime on Sunday.

Right-winger Ryan Roth scored the game-tying goal with just 5:53 left in regulation against the Spitfires Sunday night.  The Ladue, Missouri native has 20 goals and 30 assists for 50 points in just 48 games this season.

Overage forward Sean Josling leads the Sarnia Sting this season in all three major offensive categories.  In just 47 games this season, the Toronto, Ontario native Josling has 28 goals and 35 assists for 63 points, which are all team-highs.

Jiri Fischer, Derren McCarty and other Detroit Red Wings alumni, along with local EMT’s and doctors take part in a game to raise funds for Great Lakes Bay public facilities to be equipped with Automatic External Defibulators or AED’s prior to the Spirit and Otters’ battle Saturday, February 1.  Play-by-play announcer and Director of Communication, Joey Battaino and broadcast host Charley Porter will represent the Saginaw Spirit in the game.  The 13th annual Shocks and Saves Charity game is set for a 4:00 p.m. puck drop.