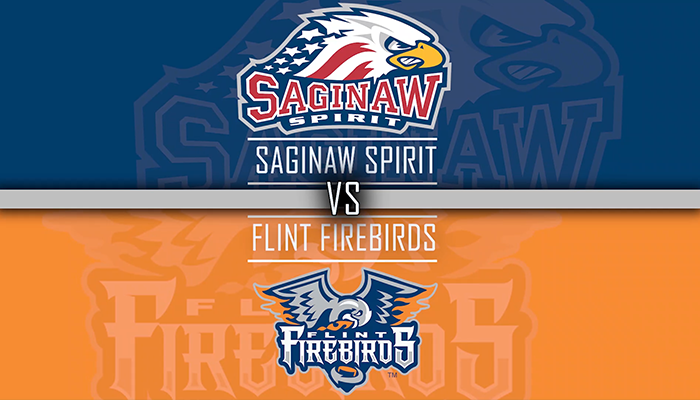 Saginaw, MI. – The Saginaw Spirit (23-11-2-2 50 pts.) start a home-and-home series to continue the I-75 Divide Rivalry against the in-state rival Flint Firebirds (20-15-1-0 41 pts.) Wednesday, January 8 to finish up the three-game home stand.  The Spirit are one of the hottest teams in the OHL, being victorious in eight of the last nine games.  Puck drop from the Wendler Arena inside The Dow Event Center begins at 7:05 p.m.

It is the fifth of eight regular season meetings between the West Division foes and the Spirit are 3-1-0-0 against the Firebirds through the first four games this season, and 18-1-1-0 in their last 20 regular season games against Flint.

Wednesday is the Eat Great Food Festival at The Dow Event Center in Saginaw, Michigan.  Former Saginaw Spirit and current Detroit Red Wings defenseman Filip Hronek autographed photo packages will be available for purchase in the Budweiser Red Room prior to the game against the Firebirds starting at 5:30 p.m.

The Spirit were victorious in the first two games of the home stand with an 8-4 win over the Oshawa Generals on Saturday and then a 5-3 triumph over the West Division rival Sarnia Sting on Sunday.

‘A’ rated 2020 NHL Draft prospect Cole Perfetti extended his point streak to a season-high eight games with a goal and assist against the Sting.  During the streak, the Saginaw Spirit leading scorer has seven goals and 11 assists for 18 points.  The Saginaw center ranks third among OHL players with 63 points in just 37 games this season.  Saginaw alum Jack Combs holds the record for points in a season by a Spirit player with 100 points during the 2007-08 season.  Perfetti is scoring 1.70 points-per-game this season which puts the Whitby, Ontario native on pace to score 112 points in 66 games.

With a goal against Sarnia on Sunday, New York Islanders prospect Cole Coskey tied Spirit alum Dylan Sadowy for sixth in team-history with 91 goals as a Saginaw Spirit.  The right-winger is second on the Spirit with 47 points in 38 games this season.  In Saturday’s game against the Oshawa Generals Coskey (202) became just the seventh player in Saginaw Spirit team history to reach the 200-point plateau.  The six other Spirit players to reach 200 points are franchise-leading scorer Ryan McDonough (247), Vincent Trocheck (240), Jack Combs (229), Josh Shalla (213), Jordan Szwarz (204), and Tom Pyatt (200).

Captain Damien Giroux has points in seven of his last eight games for the Saginaw Spirit.  Along with Perfetti and Coskey, the Minnesota Wild prospect Giroux rounds out the Saginaw Spirit top forward line that has produced a combined nine goals and 15 assists for 24 points in just the last five games together.

Rookie forward Ethan Cardwell tallied the eventual game-winning goal in the second period of the game against the Sting.  The Courtice, Ontario native has points in three of the last four games for the Saginaw Spirit.  Cardwell is tied for third among OHL rookies this season with 12 goals in 36 games.

Saginaw, Michigan native Mitchell Smith has scored a goal in the last two games for the Saginaw Spirit.  The defenseman is fifth among rookies with a plus/minus rating of plus-seven this season.

Flint was defeated 4-3 in overtime against the London Knights on Saturday night to extend their winless streak to four games.  The Firebirds surrendered a two-goal lead in the third period to the Knights before London scored with 54 seconds left in overtime.

Flint Firebirds leading scorer Evgeniy Oksentyuk extended his point streak to 13 games with a second period goal in Saturday’s defeat to the Knights.  The Belariusan forward leads Flint in goals (17), assists (25), and points (42) this season.

Captain Ty Dellandrea returns to the team after he won a gold medal in the U-20 World Junior Championships with Team Canada.  In 27 games with the Firebirds this season, the 2018 Dallas Stars 13th overall pick has 17 goals and 20 assists for 37 points.

Flint traded away their 2018 second-overall pick Evan Vierling, along with the second-round pick in the 2023 and 2024 OHL Drafts.  The ‘C’ rated 2020 NHL Draft prospect had 10 points this season in 15 games with the Firebirds.