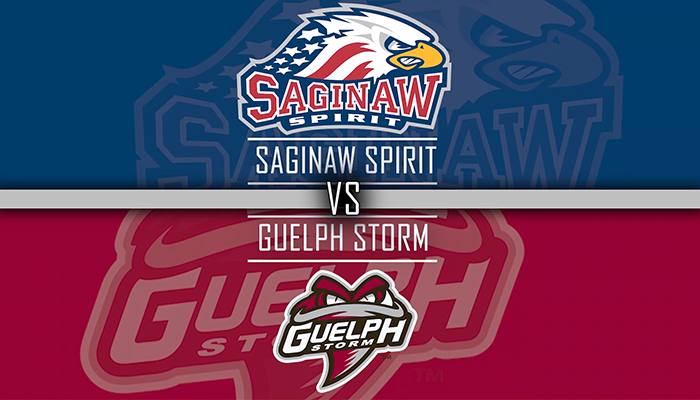 The Spirit dropped the first three meetings of the season against the Storm, including a 3-2 shootout loss at The Dow Event Center in the last contest.

Prior to the game against the Storm, the Budweiser Red Room will feature a Local Area Mental Health Professionals Special Presentation in attempt to bring awareness to mental health issues and help put an end to the stigma that surrounds them.

The Saginaw Spirit are coming off a 7-3 defeat to the CHL’s eighth ranked London Knights Friday evening on the road.  Saginaw was unable to recover after they surrendered five second period goals to the Knights.

Former London Knights draft pick Dalton Duhart provided a bright spot for the Spirit with two goals in the game.  The Grand Blanc, Michigan native Duhart has scored nine goals and 10 assists for 19 points since the Spirit acquired the forward from the Barrie Colts earlier this season.

Spirit Left-winger Danny Katic scored the other goal for Saginaw in Saturday’s contest versus the Knights.  During this season, the South Porcupine, Ontario native Katic has already surpassed his career-highs in every offensive category with nine goals and 21 assists for 30 points.

Overage defenseman Riley Webb has at least a point in all three games the Spirit defenseman has played since he returned from injury.  The former Detroit Red Wings draft pick assisted on Katic’s goal to open the scoring in Saturday’s game.

With an assist on Duhart’s second goal of the game against the Knights, 2019 Carolina Hurricanes 28th overall pick Ryan Suzuki extended his point streak to four games.  Since the Spirit acquired the centerman, Suzuki has scored a point in nine of the 11 games played in a Saginaw Spirit uniform.

Saginaw Spirit leading scorer Cole Perfetti’s six game point streak came to an end when the Whitby, Ontario native failed to register a point against the London Knights.  The 2020 NHL Draft fourth ranked North American prospect has points in 18 of his last 20 contests coming into play against the Guelph Storm.

The Guelph Storm are coming off a dominant 5-1 victory on the road against the Soo Greyhounds Friday evening.

Canadian gold medalist Nico Daws was not tested often last night in the Soo, but made 23 saves for his 16th win of the season. Daws is the league-leader in Goals Against Average (2.39) and Save Percentage (.926%).

Minnesota Wild signee Fedor Gordeev tallied what proved to be the game-winning goal during a first period power play agains the Greyhounds.  The Guelph defenseman has three goals and 20 assists for 23 points in 39 games this season with the Storm.

2020 NHL Draft prospect Andrei Bakanov contributed two goals with an assist for three points in the victory over the Soo.  The Moscow, Russia native Bakanov has 11 goals and 11 assists through 48 games in his first OHL season.