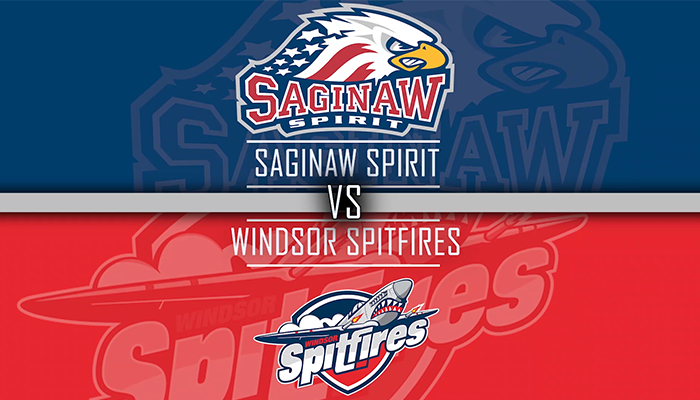 Saginaw holds the edge in the first five games of the season against Windsor with a 3-2-0-0 record.  The Spirit have won four-consecutive games and eight of their last 10 contests, overall.

Fans can catch all the action on the flagship WSGW Newsradio 100.5 FM and www.wsgw.com with the voice of Saginaw Spirit hockey Joey Battaino and Dominic Papa on the call.  “Countdown to Face-off” begins 15 minutes prior to puck drop.

The Spirit swept a home-and-home series versus the West Division rival Soo Greyhounds, with a 5-2 decision on the road Friday and 5-1 Saturday evening at The Dow.  Saginaw has scored five goals or more in the last seven consecutive games, which is one away from the team-record eight games the Spirit set last season.

Dexter, Michigan native D.J. Busdeker led offensively for the Spirit Saturday with two goals and assist in the victory.  The overage defenseman shined on special teams with a powerplay goal in the first period, as well as a shorthanded tally in the third frame.  Busdeker is first among OHL defensemen with four shorthanded goals this season.

Thornhurst, Pennsylvania native Jake Goldowski extended his point streak to a career-high seven games with an assist in the second period of Saturday’s game against the Soo.  The Saginaw right-winger has four goals and four assists with a plus/minus of plus-nine during the seven-game streak.

Saginaw’s netminders Tristan Lennox and Marshall Frappier turned in two strong performances against the Greyhounds over the weekend.  16-year old Lennox stopped 34 of the Soo’s 36 shots en route to the goaltender’s 13th victory of the season on Friday evening.  Frappier notched his 14th win of the year after the Ottawa, Ontario native allowed just one goal on 22 Greyhounds shots.

Carolina Hurricanes first-round pick Ryan Suzuki was held without a point for the first time since the Spirit acquired the centerman prior to this season’s trade deadline.  Since his arrival in Saginaw, Suzuki has three goals and four assists for seven points in four games.

The Windsor Spitfires kept pace with the Spirit Saturday evening with a 4-3 home victory over the Erie Otters.  The Spitfires trail Saginaw by just one point for the West Division lead.

Dallas Stars prospect Curtis Douglas contributed two points in the victory over the Otters, which earned the center the game’s first-star honor.  The Oakville, Ontario native Douglas has points in seven of his last eight games for Windsor.

2019 Columbus Blue Jackets seventh round pick Tyler Angle leads the Spitfires this season in both goals (21) and points (46).  Angle has already surpassed his career-high totals in all the major offensive categories this season.

Nashville Predators second round choice Egor Afanasyev leads Windsor this season with 27 assists.  The Moscow, Russia native Afanasyev has been a major part the Spitfires second-ranked power play unit with a team-high seven goals on the man-power advantage this season.

Saginaw has two players listed in the 2020 NHL Central Scouting Midterm Rankings, with Cole Perfetti ranked No. 4 among North American Skaters and Ilya Solovyov ranked No. 119 (projected fourth round).