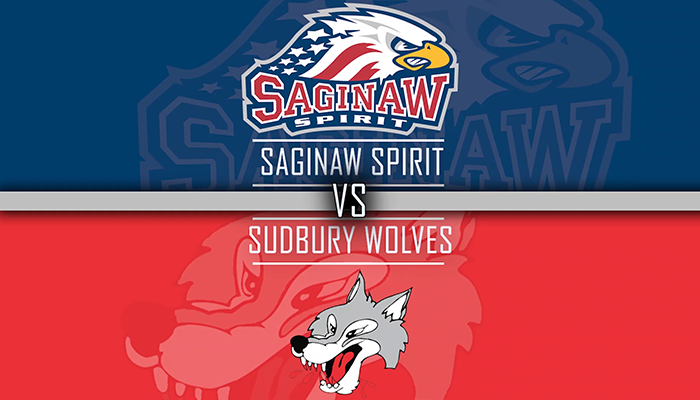 Sudbury, ON. – Two top 2020 NHL Draft prospects face-off Friday, February 21 when Cole Perfetti and the Saginaw Spirit (34-16-3-2 73 pts. 4th in Western Conference) travels to the Sudbury Community Arena in Sudbury, Ontario to take on Quinton Byfield and the Sudbury Wolves (29-25-1-0 59 pts. 2nd in Eastern Conference).  Puck drop for the second and final regular season meeting is set for 7:05 p.m.

NHL Central Scouting has Byfield ranked second among North American 2020 NHL Draft eligible skaters and Perfetti slotted fourth ahead of the NHL Draft, which will take place in Montreal, Quebec this June.

The Spirit were unable to overcome special team mistakes in a 6-5 overtime defeat to the Barrie Colts in their last game Thursday evening, which kicked off the three-game Northern Ontario road swing.  Saginaw surrendered two shorthanded goals and a power play tally to the Colts in the defeat.

OHL’s ‘On-the-Run’ Player of the Week Cole Perfetti extended his point streak to five games with an assist in the defeat Thursday night.  Perfetti, the 2018 fifth overall pick of the Saginaw Spirit, has five goals and eight assists for 13 points during the five-game point streak.  The Whitby, Ontario native Perfetti leads the Spirit with 64 assists and 98 points this season.  Perfetti is two points from tying the Saginaw Spirit single season record 100 points set by Jack Combs during the 2007-08 season.

Carolina Hurricanes first round pick Ryan Suzuki extended his point streak to nine games with a goal against the Colts Thursday evening, which tied his career-high mark set earlier this season.  The London, Ontario native Suzuki has registered a point in all but two of the 16 games the centerman has played for the Saginaw Spirit.

Grand Blanc, Michigan native Dalton Duhart, who played 11 games earlier this season for the Barrie Colts, netted a goal against his former club Thursday night.  Duhart comes into the game against Sudbury riding a three-game point streak and has goals in the past two games for the Spirit.

New York Islanders prospect Blade Jenkins has three goals in the past two games since the right-winger returned from a four-game suspension back on February 1.  The Jackson, Michigan native Jenkins brings a three-game point streak into the game against the Sudbury Wolves.

The Sudbury Wolves return home to take on the Spirit after they suffered a 5-2 road loss to the Peterborough Petes on Monday evening.

Carolina Hurricanes prospect Blake Murray tallied one of Sudbury’s two goals in the loss Monday against the Petes.  Murray, who hails from Uxbridge, Ontario, brings a five-game point streak into play Friday, including six goals and two assists during the stretch.  The Wolves left-winger has 28 goals and 32 assists for 60 points this season, which puts him third among Sudbury players.

Second rated North American 2020 NHL Draft prospect Quinton Byfield leads the Wolves in the major offensive categories this season.  Through 40 games in his second OHL season, Byfield has 32 goals with 42 assists for 74 points, which put the centerman 10th among OHL scorers.