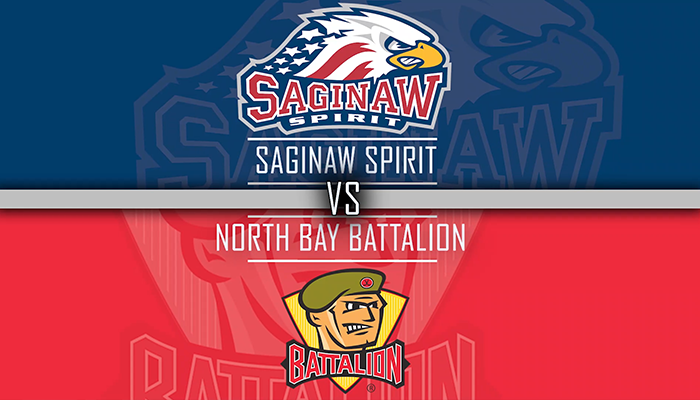 The Spirit scored six second period goals, en route to a 9-1 victory over the Battalion in the first meeting of the season at The Dow Event Center in Saginaw, Michigan back on October 18.  Saginaw capitalized on two man-power advantages in the victory and outshot North Bay, 37-23.

The Saginaw Spirit come into play one-point back of the idle Flint Firebirds for first place in the West Division, who lost Saturday for the first time in 15 games.

North American fourth ranked 2020 NHL Draft prospect Cole Perfetti tied Jack Combs’ single season points record Friday evening, after the Whitby, Ontario native reached the 100-point plateau for the season.  The Saginaw Spirit leading scorer dished out two assists in the victory over the Wolves and had a plus/minus rating of plus-three for the game.  In the first game against the Battalion, Perfetti contributed a goal and three assists in one of the forwards five games this season with four or more points.

2019 Carolina Hurricanes 28th overall pick Ryan Suzuki extended his career-high point streak to 10 games with a goal and assist against Sudbury.  During the 10-game streak, the London, Ontario native Suzuki tallied seven goals with nine assists for 16 points.  The centerman tallied an assist for the Barrie Colts in one game against the Battalion prior to the trade deadline acquisition by the Spirit.

Captain Damien Giroux scored twice against his hometown Sudbury Wolves in the 10-6 victory Friday night.  The 2018 Minnesota Wild fifth-round selection leads the Spirit this season with 37 goals in 55 games this season.  The Saginaw forward dished out two helpers in the first matchup against North Bay earlier this season.

2019 Saginaw Spirit second round pick Josh Bloom brings a three-game point streak into play against the Battalion on Sunday.  The 16-year old rookie provided two goals and three assists during the three-game streak, including a two-assist effort against the Wolves Friday evening.

Philadelphia Flyers prospect Mason Millman has three assists in the past two games on the Saginaw blueline.  The London, Ontairo native has 13 goals and 25 assists for 38 points from the backend in his second full season with the Saginaw Spirit.  Millman tallied his career’s lone four-point game with a goal and three assists back on October 18 against North Bay.

Sunday’s matchup will feature the two OHL-leading shorthanded goal scorers in Saginaw’s D.J. Busdeker and North Bay’s Luke Moncada, who each have seven goals while their club are on a man-power disadvantage.

In addition to the seven shorthanded goals, the Dexter, Michigan native Busdeker provided two shorthanded assists to lead the OHL with nine point while a man-down.  The overager tied Calgary Flames defenseman T.J. Brodie and Giroux for 15th in Saginaw Spirit team-history with 87 career OHL assists.  In the first game against North Bay, the Spirit right-winger tallied a goal with an assist.

North Bay brings a three-game winning streak into play Sunday against the Spirit, after dismantling the OHL-leading Ottawa 67’s 6-2 in their last game on Thursday evening.

Moncada, a 2016 third-round pick of the Guelph Storm, completed his third hat trick of the season in the victory over the 67’s, including a shorthanded penalty shot tally midway through the second period.  The Toronto, Ontario native leads all North Bay Battalion players in both goals (32) and points (55) this season.  The Battalion captain Moncada contributed the lone goal for North Bay in the October 18 loss to the Saginaw Spirit.

The North Bay Battalion have one player on their roster drafted by an NHL club in forward Mason Primeau (Vegas Golden Knights).