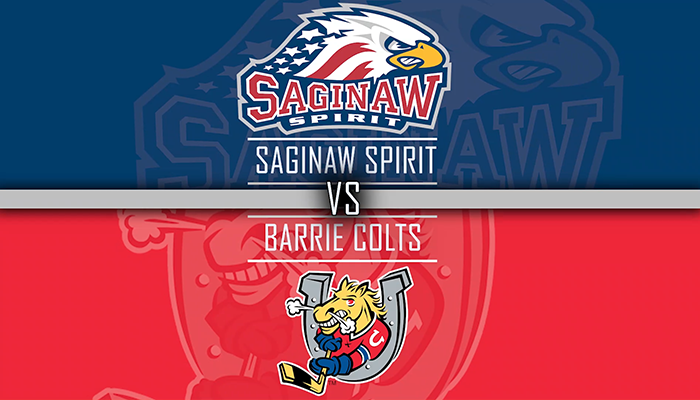 Barrie, ON. – Carolina Hurricane signee Ryan Suzuki returns to take on his former club Thursday, February 20 when he and the Saginaw Spirit (34-16-2-2 , 72 pts. 2nd in Western Conference) travel to the Colts Centre in Barrie, Ontario to take on the Barrie Colts (25-23-3-2, 55 pts. 5th in Eastern Conference) to spark a three-game road swing.  Puck drop for the second and final regular season meeting begins at 7:30 p.m.

The Spirit dropped the first matchup with the Colts 4-3 in a shootout earlier this season at The Dow Event Center in Saginaw, Michigan back on November 1.

Goaltender Marshall Frappier earned his 19th victory of the season Saturday against Kitchener after the goaltender allowed just two goals on 26 shots-on-goal.  The Ottawa, Ontario native Frappier ranks eighth among OHL goaltenders with a goals-against-average of 3.23 this season.

Former Barrie Colts first-overall pick Ryan Suzuki will take on his former team for the first time since the Spirit acquired the centerman prior to the trade deadline.  The Carolina Hurricanes first round pick extended his point streak to eight games after Suzuki tallied a goal and assist against the Rangers Saturday evening.  The London, Ontario native scored 23 points in 21 games with the Colts this season and after the trade Suzuki has nine goals and 16 assists for 25 points in just 15 games.

Saginaw notched their OHL-leading 14th shorthanded goal of the season to spark the six-goal second period barrage Saturday night.  Captain Damien Giroux converted the shorty 1:34 into the middle frame against Kitchener for his 34th goal of the season, which is tied for the Spirit team-lead with Perfetti.  The Minnesota Wild prospect Giroux is third among Saginaw Spirit players this season with 57 points.

Grand Blanc, Michigan native Dalton Duhart is also making his return to take on his former club Thursday evening.  The 19-year old Duhart played 11 games this season with the Colts before Saginaw acquired the forward via trade back on October 26.  Duhart has 11 goals and 11 assists with the Spirit this season after he tallied two assists in 11 games with Barrie.

New York Islanders prospect Blade Jenkins collected two goals in his first game back off a four-game suspension Saturday night.  The Jackson, Michigan native has 11 goals and 17 assists in 39 games played this year.

Plymouth, Michigan native Bode Wilde dished out two assists in the 8-2 victory over the Kitchener Rangers Saturday evening.  Wilde, a 2018 second round pick of the New York Islanders, has a goal and two assists for three points from the backend in just three games this season with the Saginaw Spirit.

The Barrie Colts were victorious in a 5-2 decision on the road Monday evening against the Kingston Frontenacs in their last outing.

Former Flint Firebirds second overall pick Evan Vierling netted his first career OHL hat trick against the Frontenacs Monday.  Since Vierling was acquired by Barrie via trade earlier this season, the Aurora, Ontario native has 10 goals with 12 assists for 22 points in just 18 games with the Colts.  The 2020 NHL Draft eligible Veirling has notched at least a point in 14 of his last 15 games played.

2020 NHL Draft prospect Tyson Foerster showed off his play-making ability Monday evening with three assists in the victory over Kingston.  The Alliston, Ontario native Foerster leads the Colts in all the major offensive categories this season with 30 goals and 40 assists for 70 points in 52 games.  The Barrie right-winger contributed two assists in the shootout victory over the Saginaw Spirit earlier this season.

Ethan Cardwell, Connor Punnett, Nicholas Porco, and Ian Lemieux will be taking on their former club Thursday night.  The Colts acquired the players from the Spirit in two different trades this season, one involving Dalton Duhart and the other Ryan Suzuki.

Cardwell, a former 2018 second round pick of the Saginaw Spirit, has eight goals and 10 assists in the 16 games the right-winger has played with Barrie.  Prior to the trade to Barrie, Cardwell has 12 goals and nine assists for 21 points in 37 games with the Spirit.