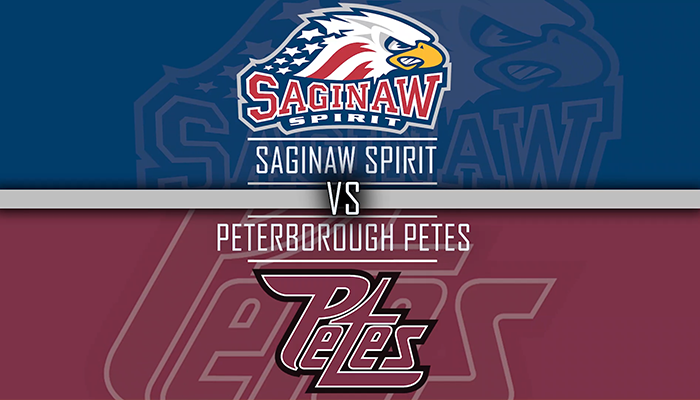 Peterborough, ON. – Two top Ontario Hockey League teams clash Thursday, January 23 when the Saginaw Spirit (27-13-2-2 58 pts.) face-off in a road test against the Peterborough Petes (28-13-2-1 59 pts.) for the final matchup of the season.  Puck drop from The Peterborough Memorial Centre in Peterborough, Ontario starts at 7:05 p.m.

The Petes are the only team to shutout the Spirit this season, beating Saginaw 4-0 on October 9th at The Dow Event Center.

Saginaw and Peterborough each made a splash prior to the January 10 OHL Trade Deadline by acquiring NHL prospects for their hockey clubs.  Saginaw acquired 2019 Carolina Hurricanes 28th overall pick Ryan Suzuki just minutes before the trade deadline cutoff and the Petes traded for Los Angeles Kings second round pick Akil Thomas on January 9.

A depleted Saginaw Spirit club dropped just their third game in the last 14 contests Sunday afternoon 5-3 against the Western Conference-leading Windsor Spitfires to start a five-game road swing.  The Spirit were down to just four players on their defense corps with D.J King and Reilly Webb out with injuries and Mitchell Smith out with a suspension.

London, Ontario native Ryan Suzuki continued his strong play since the Spirit acquired him from the Barrie Colts with a goal and two assists against the Spitfires.  Suzuki, a former OHL Priority Draft first overall pick of the Colts, has four goals and seven assists for 11 points in the five games the centerman has played for the Spirit.

Fourth ranked North American 2020 NHL Draft prospect Cole Perfetti completed a playmaker against Windsor with three assists in the contest.  The Whitby, Ontario native Perfetti leads the Saginaw Spirit in both assists (51) and points (75) this season.  Perfetti is second among OHL players this season with 75 points, which trails only Ottawa’s Marco Rossi’s 78 points this year.  In just 106 career OHL games, Perfetti ranks 18th with 61 goals, 12th with 88 assists, and 14th with 149 points in Saginaw Spirit team-history.

2019 Saginaw Spirit fourth round selection T-Bone Codd contributed a goal in the first period Sunday evening against the Spitfires.  The Brighton, Michigan native Codd has five goals and three assists through 40 games in his first OHL season.

Philadelphia Flyers prospect Mason Millman scored his 12th goal of the season in the 5-3 defeat Sunday.  The Spirit defenseman has already surpassed his previous career-high goal (12) and point (28) totals this season.

The Peterborough Petes are coming off a dominant 9-2 home victory over the Niagara IceDogs Sunday evening.  Peterborough outshot the IceDogs by 42 shots in the victory and converted on two of their three man-power advantages.

Los Angeles Kings signee Akil Thomas dished out four assists against his former team the Niagara IceDogs Sunday evening.  In his four games since he was acquired by Peterborough, Thomas has a goal and 10 assists.  The Brandon, Florida native Thomas brings a five-game point streak into Thursday’s game against Saginaw.

Toronto Maple Leafs signee Nick Robertson contributed three points in the Petes 9-2 victory over the IceDogs.  The Northville, Michigan native Robertson leads Peterborough this season with 31 goals in just 28 games.  The Peterborough Petes left-winger brings a five-game goal streak into Thursday’s game, in which Robertson has eight goals during that span.

Toronto Maple Leafs third round pick Semyon Der-Arguchintsev leads the Peterborough Petes in both assists (49) and points (56) this season.  The Peterborough centerman’s 49 assists is third in the OHL behind just Saginaw’s Perfetti and Ottawa’s Rossi this season.