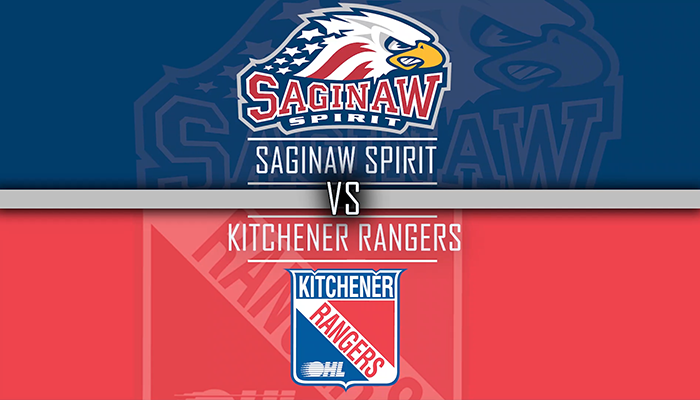 Saginaw, MI. – The Saginaw Spirit (33-16-2-2 70 pts.) host the Western Conference leading Kitchener Rangers (33-13-5-2 73 pts.) Saturday, February 15 as a part of ‘Ice Blast Weekend’ at The Dow Event Center in Saginaw, Michigan.  The game has several playoff implications, with each team jockeying for the top spot in the OHL’s Western Conference.  Puck drop for the fourth and final meeting of the season begins at 7:05 p.m.

Saturday is Ice Blast Weekend’s Credit Union Night at The Dow Event Center featuring a meet and greet session with former Detroit Red Wings defenseman Niklas Kronwall, who will be signing autographs in the Budweiser Red Room prior to puck drop.  The Budweiser Red Room will feature local Bay Area restaurants taking part in a chili cook off, as well as the Covenant ‘Which Doctors’ playing live for the patrons.

The Spirit dropped their last game in a 5-4 nail-biter against the in-state rival Flint Firebirds at home Friday evening.

Saginaw Spirit leading scorer Cole Perfetti completed his second career OHL hat trick in the losing effort against the Firebirds Friday night.  The fourth rated North American 2020 NHL Draft prospect has been on a tear in the past three games with four goals and six assists for 10 points.  The Whitby, Ontario native Perfetti is second among OHL players with 95 points this season.  The Spirit sniper has 30 multi-point games this season in just 52 games played.

2019 Carolina Hurricanes 28th overall pick Ryan Suzuki extended his point streak to seven games with an assist on Perfetti’s third goal Friday evening.  Since the Suzuki was acquired by the Spirit, the London, Ontario native failed to register a point in just two of his 14 games.  The former Barrie Colts first overall pick had 23 points in 21 games prior to the trade, however in seven less games with the Spirit, Suzuki has matched his 23-point output.

Philadelphia Flyers prospect Mason Millman sniped his 13th goal of the season in the loss to the rival Firebirds.  The Saginaw blueliner ranks 16th among OHL defenseman this season with 35 points in 49 games.  The London, Ontario native Millman has registered a point in five of his last six games from the back end.

With 33 goals this season, Saginaw Spirit captain Damien Giroux is tied with Perfetti for the team-lead.  The Minnesota Wild fifth round pick is one assist from tying Calgary Flames defenseman T.J. Brodie for 14th in Saginaw Spirit team-history with 87 career OHL goals.  Giroux is also one goal from tying Spirit alum Dylan Sadowy for seventh in team-history with 91 career goals.

Saginaw, Michigan native Mitchell Smith assisted on the second period goal versus the Firebirds on Friday evening.  The Saginaw rookie rearguard has seven goal and seven assists in 47 games from the back end this season.

The Kitchener Rangers are coming off a 6-3 defeat at the hands of their Midwest Division rival London Knights Friday evening.

Dallas Stars signee Riley Damiani led the way offensively with two goals in the contest with the London Knights Friday evening.  The Mississauga, Ontario native Damiani leads the Rangers in both assists (46) and points (69) this season.

2019 Florida Panthers sixth round pick Greg Meireles also contributed a two-point effort in the losing cause Friday evening in London.  Meireles, who is in his overage season, is second among Kitchener Rangers players with 27 goals this season, which trails just fellow overager Jonathan Yantsis (34).

Los Angeles Kings draft pick Jacob Ingham suffered just his six loss of the season Friday evening, after he surrendered five goals on 34 shots against the Knights.  The Barrie, Ontario native Ingham is fourth among OHL goaltenders with a 2.76 goals-against-average this season.